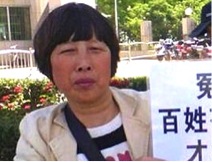 Petitioner Zhang Xiaoyu (张小玉) and her husband, Xu Youchen (许有臣), were severely beaten by police in Henan Province after they were detained on suspicion of killing a policeman. According to Rights Defense Network (RDN), lawyer Liu Shuqing (刘书庆) was able to meet the couple and confirmed that Zhang has nearly lost her eyesight as a result of a police assault in Jiaozuo City, while Xu sustained serious injuries to his face, including many abrasions. Lawyer Liu has requested that Zhang be released on medical grounds. The couple, veteran petitioners who have been detained in black jails many times and also been sent to Re-education through Labor, is currently held at Jiaozuo City Detention Center.

On July 17, Jiaozuo police had abducted Zhang and Xu in Beijing, where the couple was petitioning, and took them back to their hometown, according to Civil Rights and Livelihood Watch (CRLW). Back in Jiaozuo on the same day, they were taken to Zhucun Police Station. Their son, Xu Tianlong (许天龙) was told that his parents were detained for stabbing a policeman at the Jiaozuo police station. Lawyers’ request to move the case to another district to avoid conflict of interest was rejected.

The couple’s case has been fraught with procedural irregularities. The body of the policeman allegedly killed by the couple was rushed to be cremated on July 21, only four days after he died, making it impossible to re-examine the exact time and cause of death. On the same day, after demanding to meet Zhang, lawyer Chang Weiping (常玮平) was summoned and interrogated by police for 12 hours. Police named the lawyer an important witness in the case, effectively preventing him from representing Zhang. Lawyer Chen Taihe (陈泰和) and lawyer Liu Shuqing were subsequently denied visits to Zhang. The attorneys now handling the case, Li Jinxing (李金星) and Liu Hao (刘浩), were beaten up by a group of unidentified men outside of the Jiaozuo City Detention Center on July 30.[1] 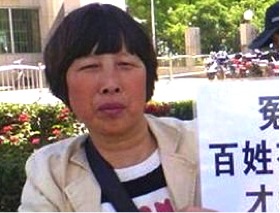 Petitioner Zhang Xiaoyu (张小玉), who has recently been detained, has suffered severe damage to her eyes from a police beating. (Image: CRLW)

Trials and pre-trial proceedings are finally taking place or are set to start for four activists detained about a year ago during the crackdown on free assembly, association, and expression.

The cases of Anhui-based activist Zhou Weilin (周维林) and Shanghai writer-activist Li Huaping (李化平) had hearings this week, reports RDN. Zhou’s pre-trial meeting was held on July 28 at the Shushan District People’s Court, which also heard Li’s case on July 30 but did not issue a verdict. Li’s trial was essentially closed to the public, as authorities barred supporters from entering the courthouse. Seized in the summer of 2013, Zhou and Li were later criminal detained on suspicion of “disrupting order of a public place.” In April 2013, they had helped organize rallies outside a primary school after authorities in Hefei City in Anhui had barred Annie Zhang (张安妮), a daughter of dissident Zhang Lin (张林), from attending school, citing her household registration in another city. Zhou Weilin turned to rights activism after losing his left hand in a factory accident. He has focused his advocacy on the persecution of activists, labor rights, and rights of persons with disabilities. Li Huaping, an influential commentator who writes online under the name “Norwegian Wood,”has been linked to the New Citizens’ Movement.[2]

In Guangdong Province, a pre-trial meeting will be held on August 1 for detained activist and legal advisor Guo Feixiong (郭飞雄, whose real name is Yang Maodong (杨茂东) and activist Sun Desheng (孙德胜), confirms RDN. Seized in August 2013 and arrested the next month, Guo is facing a charge of “gathering a crowd to disrupt order of a public place.” He was a leading figure in a protest about press freedom held in front of the Southern Weekly headquarters in January 2013, and also in a campaign calling on the government to ratify the International Covenant on Civil and Political Rights. Charged with the same offense, Sun was criminally detained about a year ago and placed under residential surveillance in September 2013, and had reportedly taken part in a campaign calling for political, legal, and anti-graft reforms.[3]

Five Jiangsu activists—Ms. Ding Hongfen (丁红芬) and four men, Qu Fengsheng (瞿峰盛), Shen Aibin (沈爱斌), Shen Guodong (沈果东), and Yin Xijin (殷锡金)—have been indicted for “intentional destruction of property” in apparent retaliation for uncovering a black jail and rescuing detainees there in June 2013, reports RDN. Wuxi City authorities indicted them on May 29, and a trial date has yet to be announced. The five activists were seized after alerting police to illegal detentions of petitioners in a Wuxi guesthouse, among them a 82-year-old woman and a 75-year-old man (see report). The activists have been accused of damaging guesthouse property, including the door to the room where the freed individuals were locked up. The five activists are currently detained at Wuxi City No. 1 and No. 2 Detention Centers. CHRD previously reported that police tortured Shen Aibin in an attempt to coerce a confession (see report).[4]