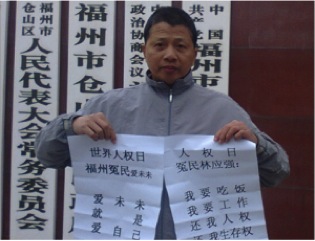 Fujian-based activist Lin Yingqiang (林应强) was intercepted in Beijing during the Chinese Communist Party’s Third Plenum as he tried to raise awareness about corruption in his home province. His family lost contact with him after Lin told them that he was seized and detained in a “black jail,” an extralegal detention facility, waiting to be taken back to Fuzhou. The family was given no official notification of Lin’s detention until mid-December 2013, when Lin was formally arrested. Prior to his arrest, Fuzhou authorities held him incommunicado and twice searched his residence, without showing any warrants or informing his family, and confiscated computers and petitioning documents. Since Lin’s initial detention, authorities have denied visitation by his family. Moreover, Lin’s pre-trial detention at Fuzhou City No. 1 Detention Center has exceeded the legal time limit under China’s Criminal Procedural Law. Lin’s wife reported that Lin had been secretly tried, after his lawyer had gone to Fuzhou People’s Court on December 12 and found out that they had already held the court hearing. Lin was silent during his trial in protest. On February 5, Lin was sentenced to three years imprisonment. On the day of his sentencing, the baliff physically assaulted Lin, leaving him with several injuries which prevented him from attending the court hearing. The judge pronounced his sentence at the detention center.

Born in 1966, Lin Yingqiang is a former police officer and, beginning in the 2000s, began trying to hold officials responsible for illegal land grabs and forced evictions in his village. For over a decade, despite repeated violent reprisals against him and his family, Lin continued to demand redress for villagers’ loss of land and livelihood without compensation. For his activism, Lin was sentenced in 2008 to four years in prison on a trumped-up charge of “extortion,” and has been subjected to beatings, house arrest, numerous detentions (including in black jails), and death threats. During one of his past detentions, in 2013, Lin was held by police for 33 hours without food, chained to a “tiger bench,” an instrument of torture, and strip-searched. In addition, Lin had lost many jobs and been forced to frequently move because authorities would warn employers and landlords not to get involved with a target of “stability maintenance.” His family members have also suffered reprisals; thugs beat his son, and his wife developed cirrhosis during his past imprisonment, as she was unable to obtain medical care after authorities stripped her of a healthcare subsidy.