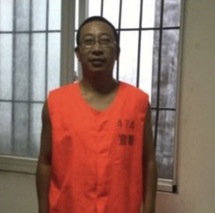 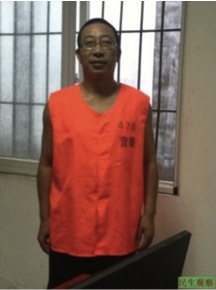 Hubei-based democracy activist Liu Jiacai (刘家财) was detained during a nationwide crackdown on freedom of assembly, association, and expression that began in March 2013. Initially given a 10-day administrative detention for “disrupting public order” in August 2013, Liu was criminally detained  on the day of his release on suspicion of the more serious criminal charge of “inciting subversion.” Prior to his detention, Liu had posted and shared views online about legal rights and organized gatherings in Yichang City for activists to discuss issues of rights and social justice.

Liu’s wife raised concerns about her husband’s heart condition while in detention, and that she and his lawyers Xie Yanyi (谢燕益) and Zhang Keke (张科科) had not been able to visit him at that time to verify his health status. They applied for release on bail on September 16, 2013 because of his heart condition, but the request was ignored and police instead formally arrested Liu two days later for “gathering a crowd to disrupt order of a public place.” Four days after his arrest, police granted Liu the first meeting with his lawyer, who reported following this meeting that Liu’s health had indeed deteriorated since he was taken into custody and held at Yichang City No. 1 Detention Center. Lawyer Xie reported after a visit in November 2013 that Liu was being held in a room with around 20 other detainees, and he requested the detention authorities transfer Liu to a quieter room for humanitarian reasons, but the request was not granted. Authorities have denied Liu’s wife and lawyers’ repeated requests for his release on bail for medical reasons.

The criminal accusations against Liu changed again to “picking quarrels and provoking trouble” and then “disrupting social order before the procuratorate formally indicted him for “inciting subversion” on December 10, 2013. Authorities had questioned Liu on several occasions and put him under house arrest before eventually detaining him. According to his indictment, authorities claimed Liu had “exaggerated and exacerbated social conflicts” through his writings and when meeting with others. Nearly one year after his initial detention, the Yichang court tried to put Liu on trial behind closed doors, but after strong opposition from his lawyers, authorities allowed three family members to observe the hearing in July 2014. Police put Liu’s supporters under house arrest to prevent them from attending. He did not receive the verdict until nearly a year after his trial, when the judges sentenced him to five years in May 2015. He appealed, but the Hubei Higher People’s Court turned down his appeal in December 2015. He is expected to be released in August 2018.

In August 2016, Liu’s wife raised alarm about her husband’s condition in prison. She said his psychological wellbeing is suffering from the pressue in prison and frequent punishments he receives. He is reportedly taking medication for his mental health. During the August visit between Liu and his wife, a prison officer monitored the meeting so Liu could not speak freely about his treatment. Liu’s wife Wang Yulan spoke with a recently released inmate from Hanjin Prison who worked in the same squad as Liu Jiacai for two months. He said the inmates are forced to work for 12 hours a day making clothes, and frequently receive corporal punishment, have their food rations docked, or are forced to work overtime for infractions, including missing work quotas. For breakfast and dinner, the inmates only receive a small ladle of porridge. The guards would tell other inmates not to speak with Liu, declaring he was a “counter revolutionary prisoner.”

Liu was released in August 2018 after completing his sentence.

Born on October 26, 1965, Liu Jiacai began to actively engage in defending labor rights for fellow workers at a factory starting in 1998. In 2001, Liu was imprisoned for two years in apparent retaliation for his activism that included forming an independent labor union, participating in efforts to expose corruption, and memorializing the anniversary of the 1989 Tiananmen Massacre. After his release, Liu eventually found work in Yunnan Province and continued to engage in pro-democracy activities online. In Yunnan, provincial authorities warned him on several occasions about his rights activism, and also confiscated his laptop computer. In late 2012, his employer in Yunnan informed him that the firm could no longer cope with pressure from authorities that his activism had attracted, and fired him from his job.