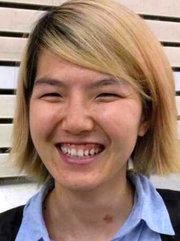 Beijing police seized activist Li Maizi (李麦子, real name Li Tingting, 李婷婷) in the evening of March 6, and searched her home. She was swept up in a coordinated raid due to a planned campaign set for March 8 to raise awareness of sexual harassment on public transportation for International Women’s Day. She was held with fellow activists Wu Rongrong (武嵘嵘), Zheng Churan (郑楚然, aka Datu [Giant Rabbit], 大兔), Wei Tingting (韦婷婷), and Wang Man (王曼) at Haidian District Detention Center. Beijing police recommended the five women be arrested on a charge of “gathering a crowd to disrupt public order,” but a local procuratorate declined and they instead were released on “bail pending further investigation.” The conditions of her bail mean she is still a criminal suspect, and thus may be summoned for questioning at any time, restricted from travelling, and prohibited from speaking to “designated persons,” a provision used by police to try and prevent individuals released on bail from giving media interviews.

Li Tingting, born in 1989, has been the Beijing-based manager of the LGBT program at the Beijing Yirenping Center. Li has led many of the group’s campaigns related to anti-discrimination, domestic violence, and biased policies towards women in higher education and employment. In 2012, Li Tingting organized the “Occupy Men’s Toilets” campaign in Beijing and Guangzhou to highlight the need for more women’s public restrooms. The campaign was lauded as a success in the state-run China Daily, and some of her other campaigns, including raising awareness of domestic violence and LGBT issues, have been profiled in state media. While Li and the other four female activists were in detention, approximately 20 policemen searched the office of the Beijing Yirenping Center on March 25, 2015 reportedly damaging door locks and seizing several items. The raid is an indication that the women’s detentions may have also been related to their work with the center.