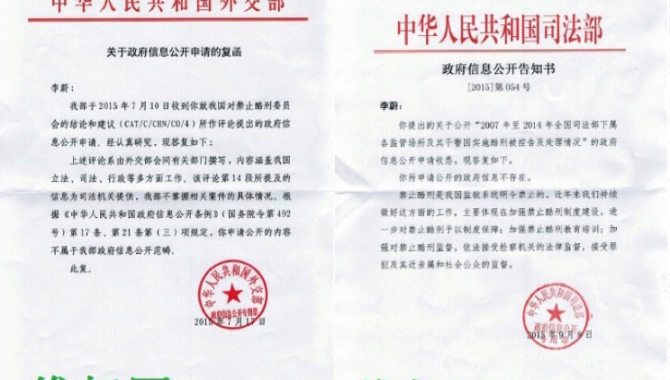 Since this spring, the Chinese government has repeatedly denied requests from Chinese activists seeking detailed information on data that it had submitted to the United Nations. These activists have applied to obtain such data via China’s Open Government Information system. For their efforts, the activists have faced reprisals—in the form of police harassment and detention. The UN Committee against Torture is examining China’s implementation of the Convention against Torture and Other Cruel, Inhuman or Degrading Treatment or Punishment, and a dialogue will take place on November 17-18. The Committee had previously requested detailed information and now so have Chinese citizens. Both have been stonewalled. This indicates that the government treats the requested information as a “state secret.”

According to China’s Open Government Information Regulations, Chinese citizens have a right to file requests on such information. In this particular instance, those seeking data on how Chinese courts have prosecuted torture crimes have several motivations; some citizens question the accuracy of data the government has provided to the Committee against Torture (CAT), and they desire more details and greater transparency in order to raise public awareness within China of the problem of torture and the CAT review itself. More broadly, they have hoped that the review—where details on state torturers can be discussed—will be useful and meaningful step in addressing the prevailing problem of torture and impunity for torturers in China.

As a prime example of how government-provided data are lacking, China’s state report submitted to CAT in 2013 lists annual totals of law-enforcement personnel convicted of torture-related crimes from 2007 to 2011, but the data does not include information on initial complaints, investigations, and individual sentences. Without such details, it is impossible to assess the accuracy of government claims made to the Committee, namely that accused torturers were impartially investigated and that their punishments are in line with the severity of crimes for which they were convicted.

In light of these gaps, dozens of citizens around China, including in Beijing, Shanghai, Chengdu, and Wuxi (in Jiangsu Province), sent in more than 100 applications for “public disclosure of information” initially to the Ministry of Foreign Affairs, which submitted the state report to the UN Committee, and later to other ministries. Besides not receiving information that they sought (see below), some activists have faced apparent reprisals, such as questioning by officials, intimidation, or even detention and police interrogation. Wuxi City police summoned Jiangsu-activist Shen Aibin (沈爱斌) for questioning and criminal investigation six times in one month.[1]

In addition, Beijing police criminally detained four Shanghai-based female activists on suspicion of “creating a disturbance” on August 30, including three who planned to submit information requests while in the capital after doing so previously in Shanghai—Yu Chunxiang (虞春香), Wei Kaizhen (韦开珍), Wu Yufen (吴玉芬)—along with Zheng Peipei (郑培培). Police held them at Fengtai District Detention Center until their release on bail on October 27. In harassing these activists, police did not specifically refer to their requests for information disclosure, and there may be other plausible causes for the police actions. However, the timing of the circumstances suggests a link between their efforts and the behavior of police. [2] 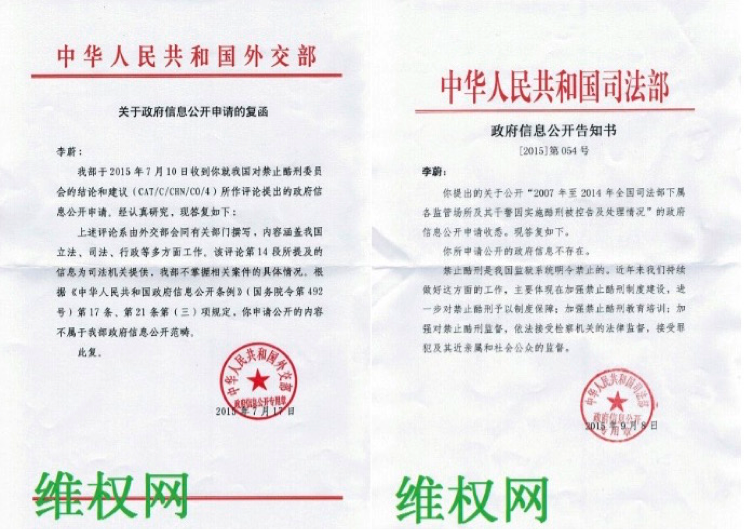 Official responses to activist Li Wei (李蔚) to his request for information on prosecuted torturers in China, from the Ministry of Foreign Affairs (left) and Ministry of Justice (right).

According to the MFA’s written reply, the information used in the 2013 state report to CAT was provided by the MOJ, which the MFA passed on to CAT, insinuating that the MFA itself is not responsible for the accuracy or origin of the data in the report. The MOJ’s response also contradicts the claims made in China’s report, raising serious questions about its reliability. Specifically, in its response, the MOJ stated that data do not exist for “officers who have been charged with committing torture during 2007 to 2014 and actions taken against them.” Yet, according to China’s report, 657 individuals were found guilty of crimes related to torture from 2007 to 2011, including “extracting confessions through torture,” “obtaining illegal evidence,” and “mistreatment.”[4]

The State Council rejected the requests, stating that such administrative acts do not fall under the scope of what the Council adjudicates. The Beijing No. 3 Intermediate People’s Court did not accept the administrative lawsuits either, declaring that private citizens cannot file litigation against “diplomatic actions” such as the preparation and submission of state reports to the UN, including for the CAT review. Some applicants have appealed to the Beijing Municipal Higher People’s Court, which stated in September 2015 that it would hear two of the lawsuits. However, the court has said it will not conduct a public hearing and will only issue its decision in writing. If so, the court’s decision would very likely come down after the review in mid-November, thus shielding the government from UN scrutiny over the issues of transparency and non-cooperation. [6]

This overall situation clearly demonstrates that the Chinese government, as a member of the Human Rights Council and party to UN treaties, has once again failed to live up to its obligations to cooperate with treaty bodies by providing information and allowing civil society participation. The government has consistently refused to provide specific and disaggregated data as requested by CAT, as most recently seen in its September 2015 response to the Committee.

Furthermore, the latest episodes of reprisals against Chinese citizens who want to participate in a UN human rights process fit the continuing pattern of the government’s blocking and persecution of such individuals in civil society. In the most tragic incident to date, the government abducted and detained activist Cao Shunli (曹顺利) at Beijing Capital International Airport in September 2013, one month before the UN Universal Periodic Review of China, as she prepared to travel to Geneva for a UN human rights mechanism training. She died in police custody five months later from deprivation of medical treatment, which was apparently a form of reprisal police used against her.

The UN Human Rights Council should hold the Chinese government accountable for failing to consult with civil society for the preparation for treaty body reviews, and its failures to cooperate with such reviews by making requested information available. In addition, the Chinese government must end reprisals against Chinese citizens who seek to engage with treaty body reviews and other UN human rights activities.