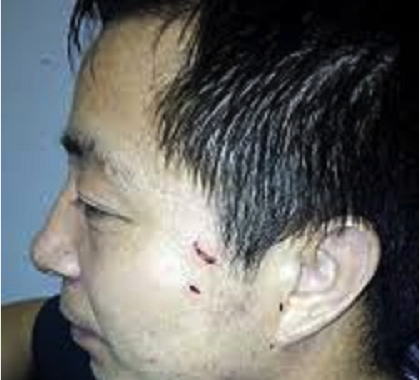 Chinese Police Use Torture To Extract Confession: Prior to UN Review of China’s Record on Torture, Activist Shen Aibin Reveals Details of His 2013 Ordeal

Jiangsu activist Shen Aibin (沈爱斌) recently came forward with a detailed account of the inhumane tactics used by Chinese police to extract a confession from him in 2013 after he and others rescued petitioners from a “black jail” in the city of Wuxi. Shen’s case, by no means an isolated case, illustrates the weak protections for individuals within China’s law-enforcement and criminal justice systems. His ordeal—of violent “interrogation” sessions and later criminal conviction based on a confession obtained through torture—exemplifies the ongoing use of cruel and inhumane methods by Chinese state agents against individuals in their custody. China’s failure to prevent torture, investigate and prosecute torturers, or prevent the use of illegal evidence at trial will be among the issues under close scrutiny when the UN Committee against Torture (CAT) reviews China’s compliance with the UN Convention against Torture and Other Cruel, Inhuman or Degrading Treatment or Punishment in Geneva in mid-November.

In June 2013, Shen and other activists were detained soon after discovering an illegal detention cell inside a guesthouse in Wuxi and freeing petitioners held inside, and Shen was subsequently tortured. In March 2014, authorities released the activists on “bail pending further investigation” due to a lack of evidence. Two months later, however, after the activists told authorities that a guard they had seen at a local procuratorate building had also been a guard at the black jail, authorities took them back into custody. Accused of “intentional damage to property,” five activists were tried in the case but only two were sentenced—Shen (to 18 months) and Ding Hongfen (丁红芬), who received a 21-month sentence. Shen was released from prison in March 2015.

Activist Shen Aibin has revealed his experience of being tortured into confessing to a crime in June 2013. His detailed account comes to light just weeks before the UN review of China’s compliance with the Convention against Torture.

According to Shen’s account of mistreatment, police officers began torturing him the day he was first taken into custody, June 26, 2013, and up through July 10. Four officers seized Shen from his home in Wuxi, hooded him, and took him to Dongjiang Police Station in Binhu District, where he was severely beaten, verbally abused, and threatened, with the apparent aim to force him to confess to criminal behavior tied to the black jail incident. Upon his arrival at the station, an officer reportedly said to Shen, “I am the lord of coerced confessions, and as long as the government wants it, I’m sure that I can bust you in two and handle your family, too.”

When Shen refused to write out a confession, police used a gruesome torture technique to try to get him to talk. They attached his arms to two rails of a “V-shaped” ladder and stretched the sides of the ladder out, pulling Shen’s arms wide apart. Though in excruciating pain and going numb, Shen did not show that he was hurt, so the officers removed the handcuffs and took him off the ladder, only to repeat the same method of torture several times. With Shen in agonizing pain, an officer told him, “There’s no rush. We have plenty of time, and I want to see how hard your bones are. I’ve handled lots of cases, and there’s never been anyone who I couldn’t break.”

After 25 hours of abuse and interrogation, Shen was hooded and taken to a black jail inside a guesthouse, where officers continued to torture him. On July 3, he was taken back to the police station and tortured again. Finally, under duress, Shen signed copies of a confession that the police had prepared. Still not satisfied with Shen’s coerced confession, those handling his case took Shen from Wuxi City No. 1 Detention Center on July 10 and back to the black jail that the group had discovered, where they photographed Shen in an apparent attempt to produce incriminating evidence. They then locked him back up in Dongjiang Police Station, further tortured him, and made him sign more copies of a confession.

Shen revealed that officers put towels between his hands and the handcuffs in order to avoid leaving any physical marks (Chinese police commonly employ tactics to conceal visible signs of abuse). Covered with the towels, his hands were squeezed very tight and swelled up, pain shot through his arms, and he felt numb, but he was able to recover quickly. Authorities finally allowed Shen’s lawyer to visit him on July 19, at which time Shen disclosed that he had been tortured to confess.[1]

What are the broader issues related to international protections against torture?

Shen Aibin’s case is replete with legal and rights violations that also plague many other cases of individuals in police custody in China, including human rights defenders as well as “ordinary” detainees not engaged in rights advocacy work. During the coming review of China’s compliance with the Convention against Torture, CAT will scrutinize cases of torture in China and examine reasons why torture continues. In preparation for the dialogue, the Chinese government recently responded to CAT about major issues related to torture (see the list of issues  that the Committee submitted to China and the government’s Chinese-language responses).

Among the concerns are ones clearly illustrated by Shen Aibin’s case. For example,

Chinese authorities often fail to take effective measures to prevent torture, such as by denying legal representation at the time of detention and not requiring the recording of all interrogations (or having lax implementation of relevant regulations). There is also a clear lack of accountability for perpetrators of torture, which allows it to go on unabated, and Chinese courts continue to allow evidence from coerced confessions to be presented in trial proceedings. These ongoing practices deprive individuals of protections laid out in the Convention against Torture (in articles 2, 12, and 15). Below, CHRD lists some of these protections, points out ways in which they are not enforced (including in Shen’s case), and notes claims about these protections that the Chinese government recently made in its responses to the Committee against Torture.