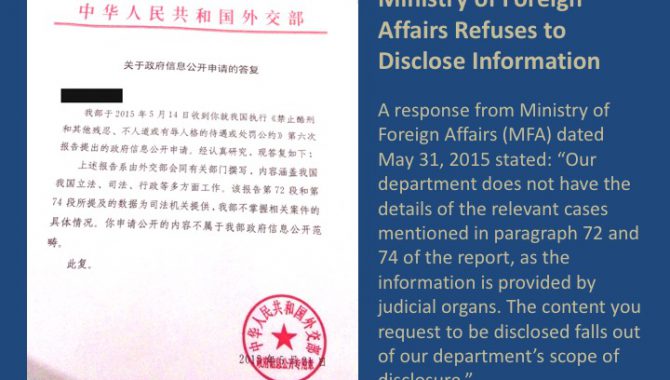 Beginning in the spring of 2015, the Chinese government repeatedly denied requests from Chinese activists seeking detailed data on convicted torturers, specifically to verify claims made by China at the United Nations that perpetrators of torture are held criminally accountable in line with relevant laws. The government itself had submitted heavily aggregated data on the cases to the UN Committee against Torture (CAT) in advance of the Committee’s review of China’s record on torture in November 2015.

The activists submitted over 100 applications to obtain the data via China’s Open Government Information (OGI) system, which is a right provided to citizens under Chinese law. The information requested was very similar to what the Committee asked the Chinese government to provide before the review. Notably, the government also did not provide such data to the Committee, demonstrating yet again China’s continuing pattern of non-cooperation with treaty bodies. In failing to obtain data about the cases, the individuals filing the requests confirmed that the “government information disclosure” system is either closed to them or dysfunctional. Some applicants even faced reprisals after submitting requests—questioning by officials, intimidation, or detention and police interrogation. At least five people were detained after applying for the data, and the family of one applicant was harassed.

The gallery below includes official documents from Chinese ministries that illustrate a systematic refusal to disclose data on torture-related cases—or even admit that such information exists—as well as court responses to lawsuits filed by applicants.