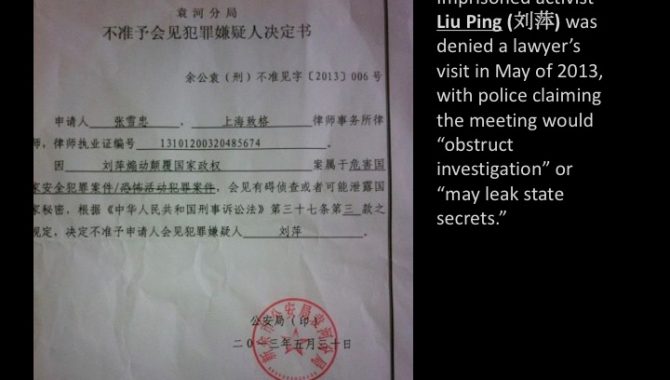 Chinese authorities’ refusal to allow lawyers to meet with their detained clients has become a worsening problem in China. Such a restriction not only violates international human rights norms, but also China’s own laws that stipulate detainees are permitted to see a lawyer within 48 hours of a request. Police often cite Article 37 (3) of the China’s Criminal Procedure Law (CPL), which allows authorities to deny a lawyer’s visit if a case involves “endangering state security,” in particular when human rights defenders have been detained. This pretext is often used to block lawyer visits in cases where detainees are accused of “political” crimes, such as “inciting subversion of state power” or “separatism.” Police have claimed that visitations (either by lawyers or family members) may “obstruct investigation” or lead to “leaking of state secrets.” However, police have also turned to citing such rationale in cases where detainees are held for “creating a disturbance” or other crimes that do not appear to involve any “state security” concerns.

Besides being deprived of lawyers’ visits, many detainees in “politically sensitive” cases can be subjected to prolonged detentions beyond legally permitted periods of time, and often without any involvement of the judiciary. Such detentions are often secretive, including when individuals are held under “residential surveillance” in police-designated locations. This has become increasingly prevalent, such as during a crackdown against human rights lawyers that began in July 2015. According to Chinese law, this type of “residential surveillance” can last for up to six months, essentially constituting a legal form of “enforced disappearance.”