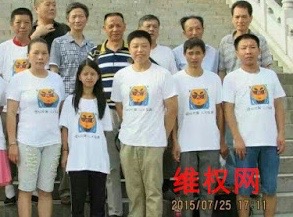 CHRD calls for an independent investigation into the alleged torture of human rights defender Yin Xu’an (尹旭安), who has been detained in retaliation for his rights advocacy since July 2015. Authorities held Yin incommunicado for over nine months before allowing his first meeting with a lawyer on May 10, 2016. During the visit, Yin told the lawyer that he had been tortured at the Daye City Detention Center in Hubei Province, where he is being held on a charge of “picking quarrels and provoking troubles.” The extended deprivation of legal counsel, itself a rights violation, removed an essential safeguard for protecting Yin from torture and other ill-treatment.

According to Yin’s lawyer, Lin Qilei (蔺其磊), Yin has repeatedly been physically assaulted by fellow inmates and also abused by guards, especially after he filed an application to have a police officer removed from his interrogation. The officer had previously tortured Yin in an attempt to extract a confession, which is expressly forbidden under China’s Criminal Law (Article 247). On one occasion in July 2015, Yin pressed the alarm bell in his cell three times during a beating, but when guards arrived, they told him, “You’re trash and deserve to be beaten!” It is not clear if Yin’s cellmates are acting at the behest of detention center guards, but such behavior is a familiar tactic used in Chinese detention facilities (see cases of Wang Hanfei, Song Ze, and Li Biyun). According to Chinese law, torture of an incarcerated individual—either by guards or when authorities instigate detainees to mistreat others in custody—is a crime punishable by up to three years in prison, or longer if the ill-treatment results in injury, disability, or death (Article 248, Criminal Law). Yin told lawyer Lin that he now suffers from dizziness, headaches, and memory loss, and the lawyer could see a scar above his eye.

As a state party to the Convention against Torture, the Chinese government has a legal obligation to allow for an independent investigation into torture allegations, hold torturers criminally accountable, and provide state compensation to torture victims. Yin Xu’an must be immediately and unconditionally released, as his detention is a violation of his right to free expression and peaceful assembly and an act of government reprisal against a human rights defender.

Detained activist Yin Xu’an (front row, far right) has reported being tortured. This photograph, which partly led to his detention after it was posted online, shows activists wearing t-shirts in support of detained activist Wu Gan.

Police in Wuhan administratively detained Yin Xu’an and several others on July 28, 2015, after they uploaded a photo of the group wearing t-shirts in support of detained activist Wu Gan outside the Yellow Crane Tower. Yin Xu’an was held in Wuhan until August 23, when he was transferred to Daye and criminally detained on suspicion of “picking quarrels and provoking troubles.” He was then placed under arrest on September 26 and formally charged on an unknown date in April or early May. His case has been transferred to the Daye City People’s Court. Yin suffers from high blood pressure and heart problems, but officials have denied his request for a comprehensive physical exam.

Yin Xu’an, 41, is a petitioner-turned-activist from Daye City in Hubei. He began petitioning in 2007 over a dispute with the local government, but later began to take part in weiquan (rights defense) activities, including demonstrations calling for the release of prisoners of conscience. Often detained in black jails, Yin also received a two-year Re-education through Labor punishment for applying for permission to hold a demonstration during US President Barack Obama’s 2009 visit to Beijing.