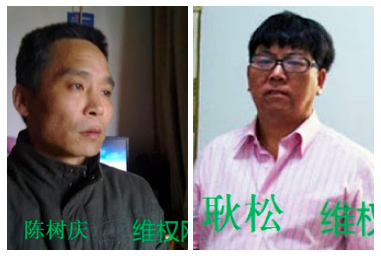 Veteran democracy activists Chen Shuqing and Lü Gengsong have been given lengthy sentences for “subversion of state power.”

Chinese authorities handed two long-time democracy activists lengthy prison sentences after convicting them of “subversion of state power,” adding to a string of harsh punishments for political dissidents under the reign of President Xi Jinping. In verdicts announced on June 17, the Hangzhou Intermediate People’s Court gave Lü Gengsong (吕耿松) 11 years while activist Chen Shuqing (陈树庆) received 10.5 years. The court put the two men on trial in September 2015. The trials focused on essays attributed to them that were published on overseas websites as well as their activities with the banned China Democratic Party, which Chen helped organize in the 1990s. Authorities have detained and imprisoned many of the party’s members over the years and declared the group illegal in 1998. CHRD calls for the immediate and unconditional release of Lü and Chen, whose deprivation of liberty infringes on their free expression and association rights.

Lü Gengsong, 59, was put under criminal detention in July 2014 and formally arrested in August on suspicion of “subversion of state power.” Chen Shuqing, 52, was detained in September 2014 and formally arrested the following month on the same charge. Chen was seized after signing an open joint statement that called for the release of detained rights defenders and also posting online his account about Lü’s denied access to a lawyer.

The harsh sentences, which fit a pattern of heightened suppression under President Xi, are likely a stern government warning to other activists in and around Hangzhou, the city where the G20 Summit of global leaders will take place in early September.

Chen and Lü had each previously served four-year sentences for “inciting subversion” in retaliation for their pro-democracy activities, and are among many from the June 4th era who continue to face political persecution. Chen Shuqing, a student participant in the 1989 democracy movement, served a prison term from 2006 to 2010 and resumed his activism upon his release. Lü Gengsong’s past sentence ran from 2007 to 2011. Lü had been an instructor at a training school for public security officers until he was dismissed from the job in 1993 due to his support for the China Democracy Party. Besides being sent to prison, Chen and Lü have consistently been subjected to other forms of persecution, including short-term arbitrary detention and tight police surveillance.