June 3, 2015       Comments Off on [CHRB] End Persecution of Participants in 1989 Pro-democracy Movement for Their Ongoing Activism 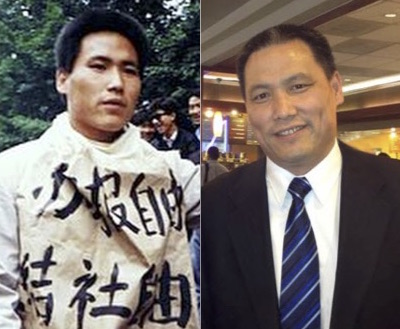 On the 26th anniversary of the Chinese government’s bloody suppression of the 1989 pro-democracy demonstrations, scores of individuals who took part in the movement are detained or in prison today for their continuing efforts to push for human rights protections and democratic reforms. Several activists and lawyers seized last year for commemorating the Tiananmen Massacre are still detained and have been subjected to torture or prolonged pre-trial detention. Since last week, more activists, including 1989 participants, have been detained, put under house arrest, or visited by police who issued warnings against any activities marking the 26th anniversary of Tiananmen. The suppression of all these individuals is an indication of the government’s fear of a mass pro-democracy movement emerging inside China.

Among those 1989 participants now behind bars are some of the most prominent and influential members of China’s civil society, who have actively promoted human rights, democracy, and rule-of-law reforms since 1989. They played leadership roles or joined the protests in 1989 as young students, professors, journalists, writers, or factory workers. Some of them served previous prison terms for their role in the movement, and all of them resumed their pro-democracy and rights advocacy activities after being released. They persisted in their pursuits despite police monitoring, harassment, and restrictions on their movements and communications.

As these cases (see below) and other cases documented by CHRD reflect, the Chinese government has shown a tendency to severely persecute those involved in the 1989 movement. Relative to measures taken against other activists, punishments for June Fourth participants have tended to be harsher; many leading activists from the 1989 era have served lengthy or multiple prison sentences.

The cases listed below, far from being exhaustive, highlight former 1989 participants who are currently imprisoned or detained for their post-1989 activities promoting human rights and democracy. (For more case details, click on the links.)

Former 1989 participants in prison (in chronological order of their imprisonment):

Of the individuals detained during the crackdown around the 25th anniversary of the Tiananmen Massacre a year ago, 13 remain in custody. Five have been put on trial, including Gao Yu, Sheng Guan, Huang Fangmei (黄芳梅), and housing rights activists Jia Lingmin (贾灵敏) and Liu Diwei (刘地伟). Five others have been indicted, including Yu Shiwen, Pu Zhiqiang, and Tang Jingling, and his associates Wang Qingying (王清营) and Yuan Xinting (袁新亭). A further two have been formally arrested—freelance journalist Jiang Lijun (姜力均) and New Citizens’ Movement activist Zhang Kun (张昆). Jiang is in a Liaoning detention center, and authorities reportedly moved Zhang to a psychiatric hospital in Jiangsu Province, where his lawyers were blocked from visiting him in March 2015.

This year, the United Nations Committee Against Torture (CAT) is reviewing China’s compliance with the Convention against Torture and Other Cruel, Inhuman or Degrading Treatment or Punishment. China ratified the Convention in 1988, one year before the Tiananmen Massacre. CAT has since repeatedly raised the issue of accountability over the government’s excessive use of force, torture, and other ill-treatment of Chinese citizens in 1989. Under the Convention, it is imperative that the Chinese government end its policy of denial and deception regarding the violent suppression of the pro-democracy demonstrations. The government has an obligation under Articles 12, 13, and 14 of the Convention to promptly and impartially investigate allegations of torture, and provide state compensation to victims of torture.

On this 26th Tiananmen anniversary, CHRD reiterates its calls on the Chinese government to release anyone who remains in prison for participating in the 1989 protests, including Miao Deshun (苗德顺), the only confirmed individual still in prison for offenses that occurred around June Fourth (his current situation remains unclear and unconfirmed by the government); release individuals who have been detained for organizing activities or expressing views to memorialize June Fourth around its 25th anniversary in 2014 and in the days leading up to this year’s anniversary; and free all 1989 participants detained or imprisoned for their ongoing activism, as well as all other prisoners of conscience in China. Chinese authorities must end the ongoing suppression of families, survivors, and supporters who demand accountability for the human rights abuses committed in 1989. In addition, the government must end its targeted persecution of members of civil society who participated in the 1989 movement.

See more information about the 1989 Massacre on CHRD’s website, including a map of the area and a list of victims and a report on the massacre’s legacy.