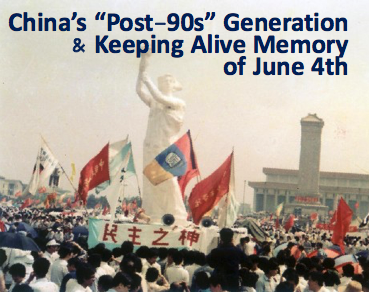 “It is disturbing that the government has no respect for history and also disrespects June 4th victims and their families. Nevertheless, June 4th is a nightmare that lingers in the minds of Chinese Communist Party rulers, a direct challenge to their political legitimacy that must have caused them great trepidation.”

Since 1989, the Chinese Communist Party has enforced a policy of denial about the 1989 Tiananmen protests and their violent suppression. Authorities have suppressed demands by victims’ families—such as the “Tiananmen Mothers”—for justice and any efforts to commemorate those who died when government troops opened fire on peaceful protesters. The government has scrubbed the truth about the Tiananmen Massacre from history books and the news media. Twenty-seven years later, have these attempts at reinforcing national amnesia about the events been successful?  Of special importance are the questions, what do Chinese born after 1989—called the “post-90s” generation—know about Tiananmen, how did they find out what really happened, and what does 1989 mean to them?

CHRD interviewed more than a dozen young Chinese from the “post-90s” generation, asking them those and other questions to get their perspective on the 1989 protests. Most of those we interviewed have at least had some exposure to uncensored information on the Internet as they have learned to scale the Great Firewall, or have been involved in human rights activism or worked with NGOs. A majority of them view the democracy and anti-corruption protests leading up to June 4th as a source of great inspiration. Still, they also have taken away cautionary lessons from the crushing of the mass protest movement. Some of those interviewed noted the political costs of the suppression to the CCP and for the country as a whole.

“Tiananmen Massacre”; “bloody suppression of student movement”; “Tiananmen Square being cleared by soldiers”; “troops” and “columns of tanks”; “the Tank Man”; “passers-by falling down”; “hunger strike”; “crowds yelling ‘democracy and freedom’”; “cries echoing without any response”; “the question ‘Perhaps such a grand movement would not be possible today?’”; “It’s a large-scale nationwide protest movement when patriotic students and workers called for democracy and opposed corrupt dictators”; “an important date: worth remembering”

Q: How was this period of history discussed or taught in school?

“My junior high school teachers in political study and history class mentioned June 4th, but very vaguely and they used very neutral language. They said that soldiers quelled the movement that day.”

“My history teachers never taught about June 4th. But I saw a video that mentioned it in one elective humanities course in high school. It was the first time I found out about it, but it wasn’t a complete picture. At university, one of my teachers brought up June 4th and said that there were videos online, but he couldn’t project them in the classroom.”

“Regrettably, I never heard a professor or instructor talk about June 4th in any detail, and the term they used most was ‘1989 disturbance.’”

“It wasn’t taught in school. My high school language teacher brought it up but not in any detail, and said we’d find out about it when we were older.”

“I only learned about it after I was out of school and heard from NGO co-workers, human rights defenders, petitioners, and rights lawyers.”

“I only recall that, in high school, I read a small book about it that had a bunch of photos of injured soldiers, as if it wanted to show that the military sacrificed a lot to protect national security.”

“The Cultural Revolution was talked about in school, but never 1989.”

“June 4th was not directly mentioned from elementary school to university, and not one teacher took the initiative to talk about it in class.”

“My schools skipped over it, and it was never mentioned in our history classes.”

Q: How have the older generations talked to you about June 4th?

“The older generation is reticent to talk about June 4th. Sometimes, when I want to discuss it, they’ll interrupt me and say ‘The power of the individual is too weak…there’s no way to change this huge issue in China…don’t bring up this kind of political topic…’ I can see the kind of fear that June 4th evokes in their hearts.”

“I didn’t know about June 4th until I was in fifth grade, when my father told me. He said that the students’ democracy movement was peaceful, and that the government shouldn’t have put it down; it shouldn’t hide the truth, and there should be redress for the events of June 4th.”

“I have discussed June 4th with several relatives. They don’t want to talk about the pain but also can’t keep it balled up inside.”

“My mother and some relatives mentioned it, saying that tanks ran over students and Deng Xiaoping cracked down on them with an iron fist. But they thought the students were in the dark and were incited by others who used them to serve as their weapon for some other purposes.”

“Older people I know said they were happy since it was their first time to see soldiers of the People’s Liberation Army march into Beijing! So they seem to have no feelings about what happened on June 4th or just pretend not to know.”

“When those from the older generation bring it up, they speak against the students and believe the CCP’s take on it—that the students caused chaos, so it’s no surprise that things got out of hand.”

“Older people I know said the government propaganda departments declared that the movement was an insurrection!”

“I’ve asked some older people, like my grandfather, and they just said that it was a chaotic time. I’ve asked more about the Cultural Revolution, so they have talked very little to me about June 4th.”

“My mom said that ours was the only house in the neighborhood with a TV, so everybody squeezed into her living room to watch the news, but all they learned about was the students rioting.”

“My parents didn’t talk about June 4th, and maybe they don’t know anything. When I have raised the topic with them, they seemed skeptical.”

Q: When you reflect on 1989, what thoughts or comments do you have?

“I really admire that so many university students that year wanted to push for democracy and freedom in China, and it’s impressive that quite a few rulers were liberal then. Unfortunately, due to various reasons, opportunities for transformation were missed, and also left a generation captive to fear. With Xi Jinping now in power, we have even fewer channels to take part in politics, and we can’t even demonstrate or make speeches like they did in 1989. But many young Chinese have learned to ‘scale the Great Firewall’ and gain access to a lot information online—including some who lean a bit towards the Chinese Communist Party—so the historical truth is not so easily hidden.”

“I think June 4th is a serious crime committed by the Chinese Communist regime against the people! The courage and spirit of sacrifice of those who took part in the movement are admirable. It is worth always remembering and learning from the 1989 pro-democracy protesters”

“It was a democracy movement that needed to be reckoned with. Even though the demands for democratic reform haven’t been realized, the movement is left in the public memory and to those who can come forward and carry it on, so that something like the 1989 massacre won’t happen again.”

“Under authoritarianism, the people have no voice, and the government won’t allow dissent or make any compromises with those who express dissatisfaction, and will instead suppress them. Looking back now, if the events of 1989 had unfolded a little later—like after the dissolution of the Soviet Union—the result may have been much better.”

“In my mind, the Cultural Revolution and June 4th are two periods indelible in people’s memories. Fifty years after the Cultural Revolution started, at least it can be discussed…But 50 years after June 4th, there’ll be no way that the events will be openly talked about. The complete whitewashing about 1989 makes it hard for younger generations to know the truth about June 4th. A lot of people from older generations know about it but don’t care too much, since things did not happen to them directly.”

“1989, in the not-so-distant past, is intertwined with so many unspeakable tragedies, and so much information from the past has been blocked, and many innocent people have since been imprisoned! There can be no progress if the government cannot own up to its historical wrongs!”

“The government should face up to this period of history, and perhaps it can be gradually more open about what can be seen online about June 4th. I hope that people don’t forget what happened. Many people know about Tiananmen today, and I hope that, decades from now, no one will have forgotten it.”

“June 4th was a very important event, it heavily influenced the political situation later. The young people who took to Tiananmen Square greatly encourage those of us engaged in social movements now, but their fate also holds some lessons for us to learn.”

“If I were a student at that time, I think I would also take part in the demonstrations and support the students, even though it would be very dangerous. Today, I really hope that I can do whatever is possible to bring about democracy in China’s political system and also redress for June 4th.”

“The students were innocent, and those who ordered the clearing of Tiananmen Square must be brought to justice. This part of history must be reconsidered and remembered. I hope that future social movements in China can learn more lessons from the past.”

Q: If you are involved in rights activism, what influence does the 1989 movement have on your advocacy work?

“For me, the greatest influence that June 4th has had on me was making me recognize the CCP’s brutality, since it was clear that the party put its own interests before those of the people, and that leaders have only lied to the people and falsified history in order to safeguard their illegitimate rule. For certain, even more important is to learn a lesson: don’t let this kind of tragedy happen ever again. In the past couple of years, China’s civil society has been under unprecedented suppression, with the Party’s grave mistakes and absurd lies becoming daily occurrences. A lot of post-1989 folks and I have firsthand experience with this, so we can’t imagine that the Party will change itself for the better. We are still thinking what we ourselves can do, hoping that the future will hold more reflection and discussion of June 4th.”

“I know that there may be a greater price to pay if you want to know the truth of June 4th. Nowadays, people have so many problems to complain about, like the state-controlled narrative about last year’s “709” crackdown on rights lawyers and their families, or the vaccine scandal, or the controversial death of environmentalist Lei Yang in police custody. Many people encounter injustices today. The road of rights advocacy is difficult, which makes it necessary that youth and university students take a stand, just as they did on June 4th.”

See more information about the 1989 Massacre on CHRD’s website, including a map of the area and a list of victims and a report on the massacre’s legacy.