November 22, 2016       Comments Off on A Mid-term Assessment of China’s Implementation of 2013 UPR Recommendations 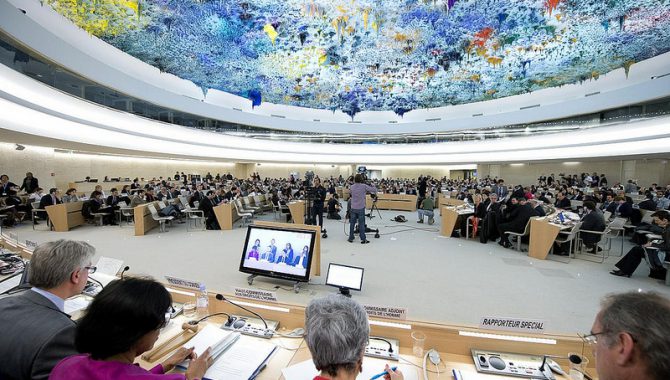 (Network of Chinese Human Rights Defenders – November 22, 2016) – More than three years after the October 2013 UN Universal Periodic Review of China, a coalition of Chinese NGOs has released a report assessing China’s implementation of the recommendations put forward by UN Member States. The report finds large discrepancies between the government’s promises and its actions related to protecting and promoting human rights. As analyzed in the report, human rights conditions in China have deteriorated in many areas where Member States recommended ending abuses, strengthening protections, and reforming existing laws and practices. Since the previous Universal Periodic Review (UPR), human rights conditions and safeguards in China have slightly improved in some limited areas. However, the overall human rights situation has worsened over the past three years.

Our findings and assessments are in line with those of human rights organizations that have documented the overall deterioration of China’s human rights since President Xi Jinping came to power in early 2013. We hope the information presented is useful for China watchers and policymakers as they continue to grapple with the causes and impact of the reversal of China’s legal and political reforms, and Xi’s departure from efforts by civil society and reformers within the government to push for rule of law.

Last month, China was reelected to the UN Human Rights Council. At this critical juncture, which marks the midway point before the third UPR of China will take place in two years, it is all the more important for civil society organizations to conduct an independent assessment. This report also helps to fill the void created by the lack of a self-assessment by the Chinese government.

China still has the next two years, before the third cycle of UPR, to improve human rights and fully implement the UPR recommendations. For this purpose, we have in this report identified the problems and the obstacles facing the government, and proposed specific suggestions. Some suggestions include, for instance, implementing a five-year moratorium on executions while working toward the abolition of the death penalty; removing legislative obstacles to NGO funding and legal registration; removing administrative obstacles, such as the annual inspection of lawyers and law firms, that can be used to intimidate or penalize human rights lawyers; amending the Anti-Domestic Violence Law to apply to all types of relationships; holding criminally accountable both sellers and buyers involved in trafficking; depathologizing homosexuality in medical classification; banning “gay conversion therapy” treatment; abolishing the discriminatory household registration (hukou) system; and ensuring school-age disabled children receive inclusive compulsory education.

This report gives voice to Chinese human rights defenders whose participation in the UPR process has been aggressively suppressed by the Chinese government. Public appeals by citizens demanding civil society participation in drafting state reports for the UPR have led to persecution of human rights defenders, including the death in custody of activist Cao Shunli in 2014. For years, Ms. Cao had organized grassroots efforts to push the government to consider non-governmental input and feedback on China’s national reports for the UPR and for China’s National Human Rights Action Plans.

This report finds fault with China’s re-election for another three-year term as a member on the HRC. The HRC is charged with being responsible for promoting universal respect for the protection of all human rights and fundamental freedoms for all, and should address situations of violations of human rights wherever they occur. Unfortunately, in an indication of serious compromises by States related to the mission of the HRC, governments unfriendly or even hostile to human rights continue to occupy membership seats. The Chinese government cited the “high number of votes” it received for a seat for the 2014-2016 term as proof of its success in supporting international human rights, while it openly admitted that its objective as a member on the HRC is to “actively declare China’s own human rights policy and point of view.”

The next two years, before the third UPR of China in 2018, gives the Chinese government another chance to demonstrate that it can behave cooperatively and constructively as a HRC member and make substantive contributions to the promotion and protection of human rights.