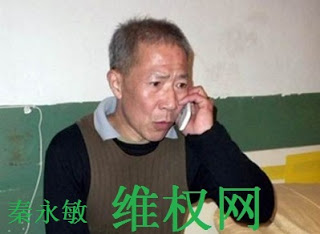 Qin Yongmin is a long-time democracy activist and dissident who had spent 22 years in prison or Re-education through Labor prior to his current detention. Qin was seized on January 9, 2015, right after completing a 10-day administrative detention, a punishment for allegedly “organizing an illegal assembly.” He was soon after taken to Baxian Island along with his wife, Zhao Suli (赵素利). According to information Qin provided to his lawyer, the couple was held on the island for approximately 70 days and guarded in rounds by Wuhan public security officers. Zhao remained forcibly disappeared until February 2018, when she met briefly with relatives, but then was put under tight house arrest (see more below).

When taken into custody, Qin was the head of a group that he had founded, named “China Human Rights Watch” (HRWIC, 中国人权观察, also known as the “Rose Team,” 玫瑰团队). The group, made up mostly of petitioners, has promoted democracy and rights protections. Qin was among more than 10 group members who police disappeared, criminally detained, or formally arrested over a one-year period in 2015 and 2016. In the years before being targeted, the “Rose Team” had issued online statements denouncing government policies and occasionally gathered for discussions about political and social issues. The group had tried repeatedly to register with authorities in order to operate legally as a formal NGO, but their efforts met with police harassment and persecution of its members.

Qin was arrested in May 2015, on a charge of “inciting subversion of state power.” The Wuhan City People’s Procuratorate twice sent Qin’s case back to police for “further investigation” before indicting him in June 2016. He was indicted on a more serious charge, “subversion,” but authorities did not reveal to Qin’s lawyer the reason for the change. The main reasons in the indictment given for prosecuting Qin are that he had circulated writings about democracy and been involved in a “series of activities with the aim to subvert state power,” including writing online essays, organizing advocacy for the China Democracy Party, founding the HRWIC group, and contacting overseas groups. Qin’s prosecution is also partly to be reprisal for his advocating the use of UN human rights mechanisms to inform international rights experts about abuses committed by the Chinese government, and for calling on the government to respect its human rights obligations set out by UN declarations and covenants.

Though Qin was formally arrested in May 6, 2015, he was denied access to a defense lawyer until August 2017, in violation of his international and domestic rights to legal counsel. Authorities scheduled his first-instance trial for December 29, 2017, but abruptly cancelled it without setting a new date for proceedings.

The Wuhan City Intermediate People’s Court eventually put Qin on trial on May 11, 2018, but did not issue a verdict. Court proceedings were held behind closed doors, and police did not allow Qin’s family members to attend and also restricted the movement of several of Qin’s supporters by holding them under house arrest. The over three years in which Qin was held before being brought before a judge constitute unreasonably prolonged pretrial detention according to international standards. On July 11, 2018, the Wuhan City Intermediate People’s Court found Qin guilty of “subversion of state power” and handed down a 13-year prison term. Qin’s family was not allowed to attend the hearing, and police detained several of his supporters.

Qin’s appeal was rejected on September 26, 2018, when the Hubei Province Higher People’s Court upheld the original punishment. Qin was transferred to Guanghua Prison on October 12, 2018, to serve his sentence.

In early 2018, it was reported that Zhao Suli, Qin’s wife, had been held in black jails for over two years but then released at some point in 2017, when authorities took her to a hospital for treatment for unknown medical issues and continued to hold her in secret for eight months. In early February 2018, her health reportedly improved, Zhao briefly reappeared and she was able to meet some of her relatives in a public park in Wuhan, Hubei Province. (Zhao herself was unable to identify the medical facility where she was treated and held.). Plainclothes police were in the park and closely monitoring her, and very soon after placed Zhao under “residential surveillance” in her residence. From that time, national security officers held Zhao under close guard and did not allow her any visitors. Zhao’s residence is on the fourth floor of a five-story apartment complex, and officers were stationed as monitors on the first and third floors of the building. In further efforts to surveil Zhao and tightly control her movements, authorities had an iron door installed in the corridor leading up to her residence, and windows were built into the exterior walls on the first and third floors. Moreover, officers stopped vehicles at the corner adjacent to her street, and questioned drivers. Zhao’s son, who attends school in Anhui Province, has also been monitored by national security officers.

In May 2019, an update on Zhao’s situation reported that she is still under de facto house arrest, restricting from seeing friends and family, cannot work and is destitute. Zhao is also suffering from health problems, and needs to see a blood specialist after a diagnosis of moderate anemia, but doesn’t have the funds to cover the expenses. She has also been suffering from mental health issues as a result of her situation.

Despite restrictions on her movement, Zhao Suli was allowed by authorites to attend regular monthly visits with Qin since he was transferred to Guanghua Prison in October 2018, though always with a glass partition between them and monitoring officers alongside. After her second visit, on December 10, she reportedly indicated that her husband said his blood pressure was very high but that he was given hypertension medication everyday, but that he also had a lung condition that caused him discomfort. Qin said that he had not written to Zhao since he was worried that any correspondence would be confiscated. Following a visit in January 2019, Zhao Suli and Qin’s brother reported that Qin’s health appears poor, with his hands visibly shaking, and he is not allowed to read books, write, and is restricted to 20-minute visits that are monitored by 4-5 guards.

CHRD learnt in April 2020 that Qin’s family have been blocked from visiting him due to the coronavirus pandemic, and officials have not agreed to allow video calls. Even prior to the COVID-19 outbreak, he had not allowed to make phone calls and the family only very sporadically received mail from him.

Qin Yongmin has been deeply involved in pro-democracy advocacy since the late 1970s, when he began to edit and publish a journal, “The Bell,” which promoted democratic reforms. Qin helped to establish the China Democracy Party (CDP) in 1980, prompting authorities to arrest him the following year and sentence him in 1982 to eight years in prison for “counter-revolutionary propaganda and incitement.” Released in April 1989, Qin participated in the launch in January 1993 of the “Peace Charter” movement in Beijing, including as a main drafter of the charter, which called for democracy in China. The charter’s supporters were among the first organized group in the mainland to demand redress for victims of the 1989 Tiananmen Massacre and advocate for the release of political prisoners. For his role in these activities, Qin was detained for “disrupting social order” and sent to a Re-education through Labor camp for two years.

In 1997, Qin published an open letter to then-President Jiang Zemin, calling on the Chinese Communist Party to initiate political reforms, including to establish constitutional democracy. He created the “PRC Human Rights Watch” Newsletter (《中国人权观察》通讯) in 1998, using the platform to issue reports about human rights conditions in China. That same year, Qin established a Hubei chapter of the China Democracy Party. In apparent retaliation for these activities, he was arrested and sentenced to 12 years in prison, for “subversion of state power.” While in prison, Qin Yongmin was elected as one of the four co-chairmen of the CDP. After he was released from prison in November 2010, Qin was placed under police surveillance and various other restrictions, but went on to resume his human rights and pro-democracy advocacy work.

Born on August 11, 1953, in the Hubei city of Ezhou, Qin Yongmin worked at the Wuhan Steel Corporation before turning to rights advocacy. Besides his three prison sentences, Qin has been taken into custody—for police questioning or some form of deprived liberty—over 40 times in retaliation for his human rights activities.

Opinion No. 20/2019 concerning Zhen Jianghua and Qin Yongmin (China), Opinions adopted by the Working Group on Arbitrary Detention at its eighty-fourth session, 24 April–3 May 2019

Report of the Secretary-General, Cooperation with the United Nations, its representatives and mechanisms in the field of human rights (reprisals report), August 13, 2018