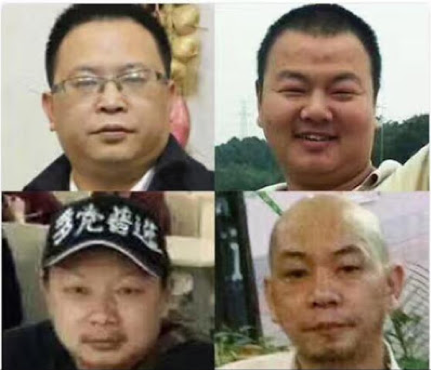 Four activists from Sichuan Province—Chen Bing, Fu Hailu, Luo Fuyu, and Zhang Junyong—were detained in May and June of 2016, after the men had produced and shared images online of a Chinese liquor label reading “June 4, 1989” (or “8964,” ba jiu liu si). The label, which played on the similarity in Mandarin Chinese between the characters for “white liquor” (baijiu) and “89” (“ba jiu”), was meant to memorialize the government’s crushing of the pro-democracy movement. Shortly after an image of a bottle with the label spread on WeChat and other social media platforms, police from the Chenghua sub-district branch of the Chengdu City Public Security Bureau took the men into custody, accusing them of “inciting subversion of state power.”

Fu Hailu (符海陆) was the first one seized among the activists, on May 28, 2016, and he was criminally detained the next day. The three others were taken into custody the following month: Zhang Junyong (张隽勇) was detained and put under criminal detention on June 9; Luo Fuyu (罗富誉) was seized on June 15 and criminally detained the next day; and Chen Bing (陈兵) was taken into custody at Chengdu Shuangliu International Airport on June 21, criminally detained on June 22, and then temporarily put under “residential surveillance at a designated location.” When the four activists were formally arrested, in early July, Chen was taken to Chengdu City Detention Center, where the others had been held all along.

Following the arrests, Chengdu authorities deprived the four activists of lawyer visits until September 2016. Prosecutors twice sent the case back to police for further investigation before indicting the men in March 2017. In the indictment, the activists were accused of using the labels and liquor to “promote the June 4th incident on the Internet.” It further alleged that Zhang Junyong, Luo Fuyu, and Chen Bing spent 9,000 yuan (approx. US$ 1,300) to buy liquor, bottles, and bottle caps in a supermarket to create the product. Luo Fuyu was accused of designing the labels while the three others had agreed to use his design. According to the indictment, Fu Hailu and Zhang Junyong posted a message about the “commemorative wine” online on May 26, 2016, setting the price for two bottles at 89.64 yuan, another reference to the military crackdown. The message was reposted by a large number of people, and Fu Hailu allegedly sold dozens of bottles before being taken into custody. In detaining the four men, officers also confiscated 900 sets of empty bottles and bottle caps. At least one bottle was smuggled out of the country, passed among Chinese activists living abroad.

After the indictment was issued, the case was transferred to the Chengdu City Intermediate People’s Court for prosecution; however, to date, the court has not tried the men and issued a verdict. The Supreme People’s Court approved a further delay of three months in May 2018. Due to procedural violations, as well as the men’s deprived expression rights, their lawyers repeatedly called on authorities to drop the case and demanded their release, along with the men’s families and supporters. In April 2018, Liu Tianyan (刘天艳), the wife of Fu Hailu, and Gao Yan (高燕), Luo Fuyu’s wife, filed a lawsuit over the unreasonably prolonged pre-trial detention and the defendants’ ongoing incarceration. In February 2019, the lawyers of Zhang Junyong and Fu Hailu were told by officials at the detention center while trying to visit their clients that they had been fired.

The four activists went on trial in separate hearings from April 1-4, 2019 at the same courtroom No. 9 at Chengdu City Intermediate People’s Court. Authorities changed the criminal charge from “inciting subversion” to “picking quarrels and provoking trouble.” Reportedly only Chen Bing was represented by a lawyer of his choice, with authorities forcing government-appointed lawyers on the other three. Fu Hailu, Zhang Junyong, and Luo Fuyu received three year sentences, suspended for between 4-5 years. Chen Bing received a 3.5 year prison sentence, reportedly because he refused to confess. Chen Bing was released on December 31, 2019 after completing his prison sentence.

Fu Hailu, Zhang Junyong and Luo Fuyu were fitted with electronic tracking bracelets after being released from custody on suspended sentences. Police warned them that they would be liable to pay more than 2,000 RMB (approx 300 USD) if the trackers were damaged. The bracelets track their GPS location, record voice and video (it has a camera), and has a SIM card so it can transmit all the information, images, and video in real time to a police server. Relevant authorities can read and collect evidence at any time, and can monitor the three men 24 hours a day without interruption.

A resident of Suining City, Chen Bing, born on February 21, 1969, is the twin brother of Chen Wei (陈卫), a prominent activist sentenced in 2011 to nine years in prison after being convicted of “inciting subversion.” Like his brother, Chen Bing had participated in or supported major pro-democracy activities, including the 1989 pro-democracy movement and Charter 08, the civil society proposal for bringing political reforms to China. Before engaging in rights defense work, Chen had studied science and technology, worked in an oilfield and with an insurance company, and founded a research institute to develop aircraft testing equipment. In the mid-2000s, his research and development venture attracted the attention of authorities, leading him to go to Vietnam to work. Upon his return to China, in 2006, police continued to interfere in his professional life, and he decided to dedicate more time to rights activism, including to support his incarcerated brother.

Born on December 13, 1986, in Dazhou City in Sichuan, Fu Hailu is a former soldier who worked as a security guard and in various other jobs before becoming active in rights defense. While in the military during the mid-2000s, he learned the truth about June 4th and began to question his service. Lacking employment after he left the military, Fu went to work in Shenzhen in Guangdong Province, where he began to promote constitutional democracy and to help others defend their rights after he observed social and economic injustices faced by migrant workers. Due to these activities, authorities forced him to go back to Sichuan, where he settled in Chengdu and resumed assisting citizens fight for justice, including victims of contaminated vaccines. Prior to his current detention, local police had frequently “invited” Fu to “drink tea,” a form of police interrogation.

Zhang Yunyong, born in Chengdu on February 24, 1970, had worked as a driver while pursuing rights defense activities for several years prior to his detention. He started his advocacy after a 2012 incident that caused environmental pollution in the Sichuan city of Deyang, when he helped spread awareness of the damage to local communities. He immediately began to face retaliation from authorities for this advocacy but continued to support many rights defense actions happening in Chengdu and other parts of China. As a result, police in Chengdu had repeatedly taken him into custody for brief periods of time.

Born in Luzhou City on December 13, 1974, Luo Fuyu worked as an advertisement designer before he started to engage in human rights activities in 2015. Luo came to recognize how the Chinese Communist Party, which wielded control over his work life, undermines the concepts of democracy and rule of law. Before being detained himself, Luo had actively called for the release of detained human rights defenders and often gathered with other activists. In May 2016, shortly before he was taken into custody, Chen had helped organize a poetry reading to commemorate June 4th. Police came to scene to disrupt it, however, and Chen warned others not to come so they could avoid detention.

A High-Proof Tribute to Tiananmen’s Victims Finds a Way Back to China, May 30, 2017, New York Times