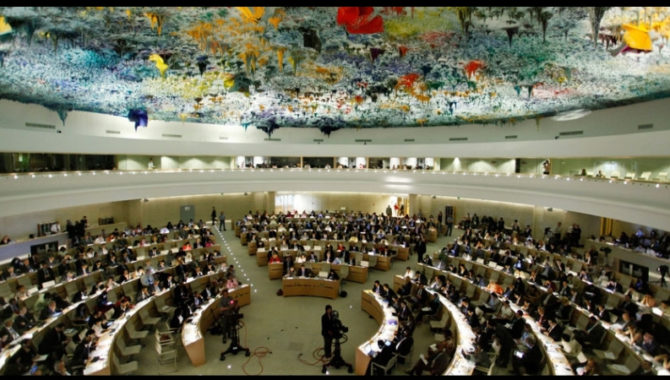 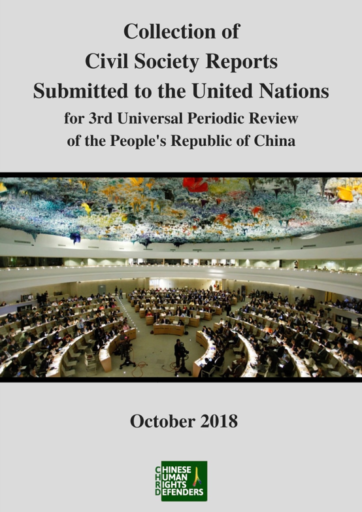 (Network of Chinese Human Rights Defenders – October 25, 2018) – On November 6 in Geneva, a Chinese government delegation will face questions over the country’s human rights record and receive recommendations for improvement from UN Member States. Every four years, each Member State undergoes such scrutiny in a process known as the “Universal Periodic Review” (UPR). It will be the third time for China to undergo this highly public and politicized review, following rounds in 2009 and 2013, and after many years of failed efforts by governments and human rights groups to use UN platforms to shed light on China’s human rights abuses going back to the 1989 Tiananmen Massacre.

CHRD and a group of China-based NGOs submitted information to the UN in March 2018 as a part of the UPR process. The NGO reports provide alternative assessments from the government’s own of the situation on the ground, with the intention to hold China to account for its pledge to implement some recommendations made by other States during the 2nd UPR in 2013. The reports reveal that, on a wide range of areas of civil, political, economic, social, and cultural rights, the Chinese government has not honored its promises, and that the overall human rights situation in China has deteriorated.

In particular, authorities have systematically used enforced disappearances against human rights defenders, drastically reduced the space for civil society organizations to operate, jailed a large number of lawyers, and committed gross and systematic rights abuses against ethnic minorities and religious groups in the Xinjiang Uyghur Autonomous Region and the Tibetan Autonomous Region.

Of grave and urgent concern is the situation in Xinjiang. Since this past March, a great amount of information about the mass arbitrary detention of Uyghurs and ethnic Muslims has surfaced. The UN Committee on the Elimination of Racial Discrimination, which reviewed China’s implementation of the International Convention on the Elimination of All Forms of Racial Discrimination in August, raised concern that Xinjiang had become a “massive internment camp shrouded in secrecy, a ‘no rights zone.’” The Committee concluded its review with a call on China to halt extralegal detentions and immediately release individuals detained in such camps.

CHRD has estimated that up to one million ethnic Uyghurs may have been detained in re-education camps, and an additional two million may have likely been subjected to day/evening indoctrination sessions. We also found through an analysis of government data that criminal prosecutions have skyrocketed in Xinjiang: 21% of all criminal arrests and 13% of criminal indictments in China in 2017 occurred in Xinjiang, even though the region’s population is just 1.5% of the country’s total. The sheer scale of abuses in Xinjiang demands that every UN Member State raise concerns during the upcoming UPR dialogue and press for a halt of abuses in the region.

The NGO reports also acknowledge very limited positive steps the government has taken in some areas. Among such developments are: reducing the number of crimes punishable by death, passing measures toward more inclusive educational opportunities for the disabled, adding new criminal and administrative penalties for violating environmental regulations, adopting an Anti-Domestic Violence Law, and taking some small steps to tackle unequal access to education by rural migrant children. The only area where the Chinese government has fully implemented a 2013 UPR recommendation is in abolishing the re-education through labor detention system; however, other forms of extrajudicial administrative detention continue to operate or are being expanded, such as detention in psychiatric hospitals, temporary facilities known as “black jails,” or custody and education detention camps for sex workers and compulsory drug detoxification centers.

There remain several overarching systemic problems in China that prevent the full realization of human rights in areas explored in the report, including the lack of government accountability and an independent judiciary, and repression on freedoms of expression, press, association, and assembly.

There is little public information about the UPR available inside China. The government has not invited any genuinely independent civil society groups to participate in a nationwide reflection on the country’s human rights problems and ways to reform. In preparation for these reports, NGOs based inside China took tremendous personal risks in conducting research and gathering information. They are likely to face aggressive persecution by the Chinese government, which has a tragic precedent: For seeking to participate in the 2009 and 2013 UPRs, human rights defender Cao Shunli, who led efforts in preparing non-governmental reports, was arrested, mistreated, and eventually died in custody in March 2014.

The Table in Annex 2 presents the NGOs’ assessments of China’s implementation of the 2nd UPR recommendations. Out of the total number of the 252 recommendations State parties made in 2013, we have determined that 236 are relevant, actionable, and measurable suggestions. Of these 236 recommendations, we find that the Chinese government has not implemented 188, partially implemented 45, and only implemented 3. We did not grade 16 recommendations because they were inappropriate; that is, they undermined the principle of universal human rights, which guide the UPR, by endorsing or recommending China to perpetuate its human rights violations.

China is a member of the Human Rights Council (HRC) and publicly pledged to uphold the “highest standards of human rights” and “fully cooperate with the Council.” However, the Chinese government has failed to honor its UN and HRC obligations without facing any repercussions. Instead, in recent years, China has more aggressively used the platform of the HRC to shield itself and fellow rights-abusing countries from scrutiny and weaken universal human rights standards and procedures. The government has refused to cooperate with the HRC, for instance, by refusing to invite many Council-appointed independent experts to visit China, or refusing to ratify the International Covenant on Civil and Political Rights, which it signed in 1998.

These problems and obstacles make this year’s Universal Periodic Review especially crucial. UN Member States that value the protection of human rights must take this opportunity to sound the alarm and urge the Chinese government to halt all rights abuses, particularly in Xinjiang, and put forward suggestions for concrete reforms. The UPR also presents a rare moment to focus global attention on human rights issues, thus serving as an advocacy opportunity for international human rights NGOs and civil society organizations, and as a spur for media worldwide to look deeply into China’s endemic rights abuses such as the urgent human rights crisis in Xinjiang.