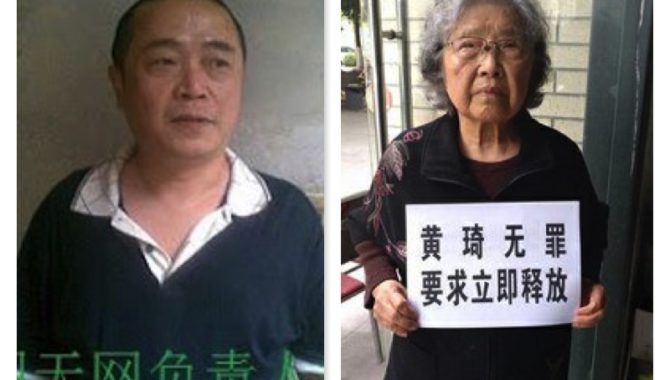 Huang Qi (黄琦), the founder and director of 64 Tianwang Human Rights Center, is not receiving adequate medical care in detention and his health has seriously deteriorated, according to his lawyer who visited him on October 23. Huang’s condition is so serious that there is an immediate threat to his life.

The Chinese government must immediately and unconditionally release Huang, who has been detained solely for the peaceful exercise of his right to freedom of expression, and end its policy of denying prompt medical treatment to prisoners of conscience, which is a form of torture. Several human rights defenders and ethnic and religious minorities have died in detention in recent years due to a lack of prompt medical treatment, including Liu Xiaobo, Cao Shunli, Yang Tongyan, and Tenzin Delek Rinpoche, intensifying fears that Huang Qi might suffer the same fate without urgent intervention.

Huang suffers from a chronic kidney disease which requires daily medication, hydrocephalus (accumulation of fluid in the brain), heart disease and other illnesses. Huang told his lawyer during the October meeting that Sichuan authorities had purposely understated the dire state of his health and had tried to cover up his actual condition. In particular, Huang’s blood pressure was actually much higher than previously revealed, with a reading done on October 18 and 19 in the detention facility measuring 221/147 mm Hg, a reading so high that it qualifies as a “hypertensive crisis” (a normal reading should be no higher than 140/90 mm Hg). Huang has also reported to his lawyers different forms of torture and other ill-treatment to which he has been subjected to in the past two years, including extended interrogations, prolonged periods of being forced to stand, and beatings.

Authorities have repeatedly rejected applications for release on medical bail despite Huang’s heath condition continuing to deteriorate. He faces charges of “illegally providing state secrets to foreign entities” and “leaking state secrets” due to his work with 64 Tianwang Human Rights Center, which documents and publishes reports on enforced disappearances, trafficking, human rights violations and complaints against government officials. Huang faces the possibility of life imprisonment. His 85-year-old mother has been campaigning for his release, fearing he may die in prison. Last month two of his associates received suspended prison sentences and were released, but authorities have continued to hold Huang. The UN Working Group on Arbitrary Detention issued an opinion in April 2018 that declared Huang’s detention arbitrary, but the Chinese government continues to ignore the Working Group’s recommendation that Huang be released and compensated.

Lawyers representing Huang Qi have also faced retaliation. One of his lawyers, Sui Muqing, was disbarred in February 2018 for defending human rights defenders, such as Huang. Huang’s current lawyer, Liu Zhengqing, received a notice in October that he is under investigation for giving Huang cigarettes during a meeting in July. Liu faces suspension of his law license or a large fine.

Tomorrow, during China’s 3rd Universal Periodic Review, UN Member States should raise the continued pervasive use of torture and other ill-treatment in China, including tactics like denying medical care for human rights defenders, and make clear calls on the Chinese government to end such practices.

Mianyang City police in Sichuan Province initially detained Huang Qi on November 28, 2016 and arrested him the following month on charges of “illegally providing state secrets to foreign entities.” A trial scheduled for June 20, 2018 was suspended without any official reason provided. In October 2018 police added an additional charge of “leaking state secrets.” He is currently being held at Mianyang City Detention Center.

Huang Qi established China’s first-known human rights monitoring website in 1998, disseminating reports about Chinese individuals who had been trafficked and disappeared. Huang has served two prison sentences, totalling eight years, in reprisal for his human rights work, and was often tortured and otherwise to ill-treated. Born in 1963, Huang Qi graduated from Sichuan University and was formerly a businessman. His work in citizen journalism has received international awards, including two from Reporters Without Borders, which awarded 64 Tianwang the Press Freedom Prize in 2016, and honored Huang in 2004 with the Cyber-Freedom Prize.

This statement is endorsed by:

International Federation for Human Rights (FIDH), in the framework of the Observatory for the Protection of Human Rights Defenders