April 21, 2020       Comments Off on China Must End Discrimination against Hubei Residents and African Migrants in the Context of Containing Pandemic 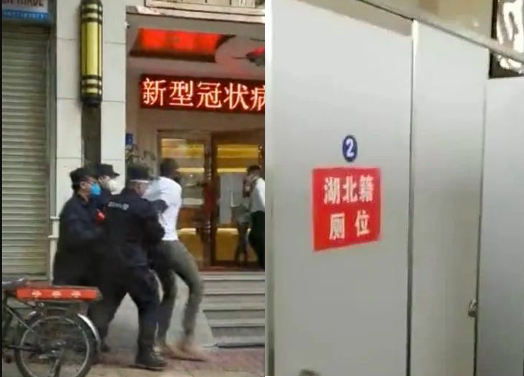 (Chinese Human Rights Defenders – April 21, 2020) The Chinese government must take effective steps to end discrimination against Hubei residents and African migrants. As the government lifts the coronavirus lockdown in Hubei and its capital, Wuhan, the origin of COVID-19 pandemic, while closing borders to travellers from abroad, there have been reports of alleged mistreatment targeting Hubei workers returning to work in other Chinese cities and African migrants in Guangzhou. Discriminatory mistreatment violates Chinese law and international human rights law.

There have been alarming reports since early April of discriminatory mistreatment of Africans migrants living in China in the context of government efforts to prevent a new wave of infections coming from abroad. On the Internet, videos and photos displayed African migrants evicted, refused rooms at hotels, and forced to sleep on Guangzhou’s city streets and police harassing Africans on the street. Authorities have forced African immigrants to be tested or quarantined for coronavirus. In some cases, some African migrants were tested for several times without being given any results. They have been denied access to shops, malls, or restaurants that are open to Chinese customers. There are thousands of migrants and businessmen from Africa in Guangzhou, an international trading hub. Several African governments have demanded that China address these concerns of discriminatory policies and practices targeting African migrants and visitors.

There have also been reports of discriminatory treatment towards Hubei residents working or living in many other Chinese cities, ranging from denial of employment, housing, restricted travel, denial of equal access to services, and discriminatory treatment of Hubei users of the “health code” apps on Alipay and WeChat platforms used by the provincial and local governments.

Some Hubei residents posted on online platforms saying they were rejected by employers many times because they came from Hubei. On April 16, a report emerged that some companies and employment agencies at Majuqiao Labour Market in Beijing have “hidden rules” to screen job applicants in order to avoid hiring workers from Hubei. On March 27, police officers from Hubei and Jiangxi and the public clashed at the border recently reopened between the two provinces, when the Jiangxi police tried to stop migrant workers from Hubei from entering Jiangxi. In another case, 24 construction workers from Hubei were denied entry to a construction site in Jingde Town, Jiangxi on March 26, because of their residential background and forced to return to Hubei the next day. Another young person from Hubei received a notice from her company—an e-commerce company—asking her to resign when she arrived in Shenzhen on March 25.

Residents of Hubei have also reported discrimination in housing. The Xiamen Asia Gulf Hotel in Fujian Province denied access to Hubei guests, according to a social media post from April 7. In one video clip posted on social media on April 6, a landlord, reportedly also in Fujian, refused to rent room to a person from Hubei, resulting in clashes. A Hubei woman who worked in Guangzhou was reportedly not allowed by her landlord to return to stay in the flat she rented. There have been other reports of people with Hubei hukou (residential registration) being refused to return to their homes in other provinces even though they had not been in Hubei since the outbreak began.

In Jiangxi Province, a widely circulated photo, posted online on February 4, showed a banner hanging out a supermarket in Jiujiang City with the slogan “People who return from Hubei are time bombs.” There have been reports that buses from Hubei province were not allowed to enter Shanghai in mid-March and many people from Hubei were “persuaded” to return to Hubei when they took buses to other cities. A toilet sign in a Guangxi public restroom designated stalls for Hubei visitors only.

Hubei residents also reported persistent discrimination even though the widely used health surveillance apps indicates their health status. The algorithm that determines the users’ health status, indicated with color codes of green, yellow or red, and thus access to services and travel, is not made public. Many users have reported having their status turn red without knowing why, indicating the lack of transparency in the app which determines the freedom of movement and access to services for millions of Chinese. One post described how a family of five from Hubei who obtained a “green code” on the Alipay Health Code system was reported to the police by neighbors when they returned to Guangdong Province. Those who have obtained a green code on the Alipay Health Code system were required to self-quarantine for 14 days in hotels and pay the accommodation themselves after they returned to their jobs in Shanghai.

Chinese netizens on Weibo have engaged in heated discussions on the discriminatory treatment of people from Hubei. Hashtags related to this issue appeared in thousands of posts, which have over hundreds of thousands of views. In March, the term “Hubei people face discrimination” (“湖北人被歧视”) was the first result when searching for the term “Hubei people (湖北人)” on Weibo. The Hubei provincial government has called for employers to provide assistance and not to discriminate against workers from Hubei, but such calls have appeared to have no effect.

The lack of a specific and comprehensive anti-discrimination law has hindered any efforts to prevent and eliminate discrimination in China. In the past, Chinese courts have taken only modest steps to enforce existing legislation that prohibit certain types of discrimination, such as the Labor Law, Employment Promotion Law, and laws on education, and protection of women’s and disabled persons’ rights. There have been no known fines or punishment handed down by judicial authorities against any alleged offenders in coronavirus-related cases of discrimination. In fact, it is very difficult for victims, whether migrants from Hubei or Africa, to figure out how or where to file such lawsuits. The lack of an enforceable comprehensive anti-discrimination law and weak enforcement of existing legislation explains the ineffectiveness of official speeches against discrimination, or the Chinese legislative body’s call on local governments to provide assistance to workers from regions hit hard by coronavirus.

CHRD urges Chinese authorities to investigate allegations of discriminatory mistreatment of Chinese citizens from Hubei Province and migrants from Africa in the context of combating COVID-19. The Chinese government must take effective measures immediately to eliminate discrimination, including: preventing the use of Alipay Health Code system from making Hubei residents vulnerable to discrimination; enforcing laws holding employers discriminating against people from Hubei accountable; prohibiting landlords or hotels owners from evicting African migrants on the basis of their race and skin color and Hubei residents for their hukou or residency status; ending police harassment against African migrants; and signing and ratifying the International Convention on the Protection of the Rights of All Migrant Workers and Members of Their Families and ratifying the International Covenant on Civil and Political Rights.