CHRD releases “Defending Human Rights in the Time of COVID-19”: Annual Report on the Situation of Human Rights Defenders in China (2020) 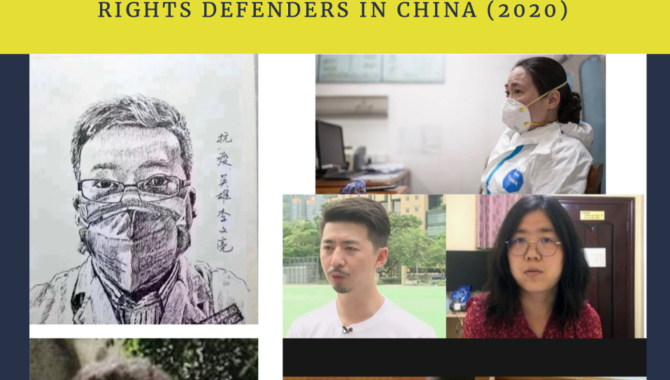 (Chinese Human Rights Defenders— March 29, 2021) During the year 2020, while the world was battling the unprecedented COVID-19 pandemic, the Chinese authorities used the exceptional period to further tighten its grip over mainland society while abandoning its pledge to respect a high-degree of autonomy in Hong Kong, says CHRD in its 2020 annual report on the situation of human rights defenders, “Defending Human Rights in the Time of COVID-19.” Despite the heavily constricted space, as CHRD’s new report details, in many cases, Chinese human rights defenders continued to speak out – and bravely push for their rights and freedoms, even in the face of unrelenting persecution.

Early in the year, authorities blocked Chinese people from sharing information about the emergence of COVID-19. This action effectively prevented information from reaching medical professionals, the public, and the international community during a vital time for controlling the pandemic. When the outbreak became public in Wuhan in early 2020, millions of Chinese took to the Internet to share information, seek help, or report on the situation in Wuhan and other cities under lockdown.  The government responded quickly: with harsh reprisals against whistleblowing doctors, outspoken critics, and citizen reporters at the frontlines. A surge in human rights violations and ongoing censorship and propaganda were linked to official efforts to combat the virus throughout the year.

2020 was also marked by the increasing control by the Chinese Communist Party (CCP) and the government over the citizens of Hong Kong as leaders undermined the rule of law and withdrew protections of civil and political liberties, thus failing to meet their obligations to maintain Hong Kong’s autonomy. The Standing Committee of the National People’s Congress imposed the Law on Safeguarding National Security in Hong Kong (National Security Law), without the approval of Hong Kong’s Legislative Council, in violation of the Basic Law. The National Security Law criminalized a wide range of activities that are protected under international human rights standards. The law also created new institutions, led by mainland security officials, that are not subject to supervision by Hong Kong’s judicial or administrative bodies. Reprisals against pro-democracy activists, legislators, journalists, and others escalated. Incidents of arbitrary detention, police violence, and torture occurred throughout the year.

Human rights defenders in the Mainland took great risks during the year, including at the time of the COVID-19 outbreak, to call out government authorities for their abuses and repressive measures. They reported rights violations; documented violence, threats and harassment; scaled the Great Firewall to access and share information. They brought breaking news to the outside world; assisted victims; defended those persecuted for their views, religious beliefs, and expression; and fought for accountability and justice. For their actions, they faced arbitrary detention, forced disappearance, torture, and other cruel punishment or inhumane treatment. Authorities continued to persecute human rights lawyers and targeted advocates of economic, social, and cultural rights.

Mass detentions of ethnic and religious minorities in Xinjiang continued, as did population control measures and forced labor programs. More information about systemic rape and harsh punishments inside the internment camps also came to light. Ongoing severe repression by China’s authoritarian leaders has led to the growing recognition that officials are committing “crimes against humanity” in the region and increasing calls within the international community to respond. Official efforts to end the use of ethnic languages in Tibet and Inner Mongolia further point to efforts to impose official control in those regions and eradicate ethnic and religious minority traditions and cultures.

The human rights crisis in China, especially in Xinjiang, Tibet, and Hong Kong, and the increasingly assertive actions by Chinese leaders beyond China’s borders, requires cohesive, strong, and united international action. Only by standing up to Chinese leaders’ brutality, censorship, and propaganda, and by supporting victims and human rights defenders at the frontlines, can the international community, including like-minded democracies, hope to safeguard and advance universal values – freedom, democracy, and rule of law.