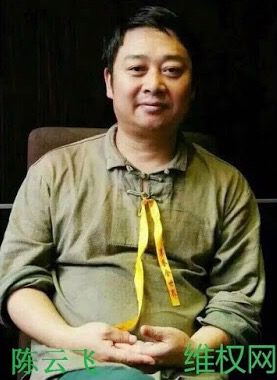 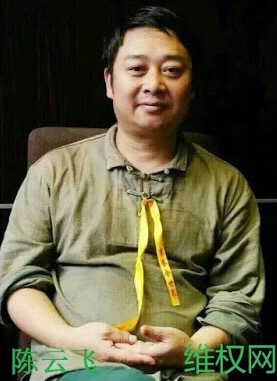 Activist and blogger Chen Yunfei was detained on March 25, 2021, and formally arrested on April 30, 2021 for “picking quarrels and provoking trouble.” Chen’s lawyer reported after visiting him on May 14, 2021 that he was in good spirits and said that he looked forward to helping others and spreading the gospel within the detention center.

Chen Yunfei went on trial on December 3, 2021 in a closed door hearing at the Chengdu City Pidu District Court. Chen’s lawyer brought up an objection to the court’s jurisdiction, and asked to see the surveillance video and audio of Chen in interrogation, and asked for “illegally obtained evidence” to be dismissed. All of these requests were denied by the court.  Chen subsequently asked to dismiss his lawyer. Chen was sentenced to four years on the charge of “child molestation”, although Chen denied the charge and believes it is being used to smear his reputation.

Sichuan police had earlier taken Chen Yunfei into custody in March 2015, after he had organized and taken part in a memorial service calling for justice for victims of the 1989 Tiananmen Massacre. The event was held around the Qingming Festival, when Chinese traditionally venerate ancestors and tend to the graves of the deceased. More than 100 police officers came to break up the service, though just over 20 individuals were in attendance. When police formally arrested Chen in April 2015, they charged him with both “inciting subversion of state power” and “picking quarrels and provoking trouble.” The more serious “inciting subversion” charge was dropped in the indictment, which came down on March 21, 2016, nearly a year after Chen was first detained. Chen was ultimately indicted for, among other actions, posting content online and on social media that “slandered China’s political system.”

Chen’s case has involved many violations of his due process rights, from his initial detention to his trial, which only took place after he had been held for two years without seeing a judge. After police detained him, Chen’s family searched for him for 10 days, but authorities refused to provide information on his whereabouts. Police did not give Chen’s family an official detention notice until April 3, 2015, nearly a week after criminally detaining him. Citing “state security” concerns, authorities blocked Chen’s lawyers from visiting him on several occasions, and he was held for nearly half a year without access to legal counsel from the spring to fall of 2015.

After the court announced that Chen would be tried on December 26, 2016, authorities delayed the hearing but without giving a reason. When he was eventually tried, in March 2017, the court held de facto closed-door proceedings and refused to admit evidence from Chen’s defense attorneys, Guo Haibo (郭海波) and Sui Muqing (隋牧青). The judges repeatedly interrupted and warned the lawyers, and cut off Chen when he was giving his closing statement. On April 20, the Chengdu City Intermediate People’s Court held an appellate trial and upheld Chen’s original four-year punishment.

Chen has reportedly been subjected to torture and mistreatment, including just prior to his current detention. On March 21, 2015, before Chen was seized, his apartment was broken into and some of his belongings were stolen. Chen called police to file a report, but an officer who came then assaulted Chen on the way to Jitou Police Station in Wuhou District. After they arrived, Chen was beaten again, and the officer tore up and threw away Chen’s identification documents, including an entry visa to Hong Kong. Before Chen was released, the same officer forcibly injected an unknown liquid into the activist’s body.

During a detention center visit on January 13, 2017, Chen informed his lawyers that he had suffered injuries from having his hands cuffed and feet shackled on two separate occasions, in apparent punishment for refusing to properly greet officers at the detention center. Guards prevented Chen’s lawyers from photographing the injuries as evidence. While Chen overall appeared to be in good health during that meeting, the detention center has not fulfilled his nutritional requirements; as a vegetarian, Chen had not been given eggs for protein, despite his request and the detention center’s verbal agreement to do so.

Chen was released on March 25, 2019 at the end of his sentenece and allowed to return home.

Born on August 13, 1967, in Sichuan Province, Chen Yunfei participated in the 1989 pro-democracy movement while studying at China Agricultural University in Beijing. He has long been involved in calls for the Chinese government to investigate the Tiananmen Massacre and provide compensation to victims’ families. His human rights advocacy, which has often included humor and “performance art,” has made him a frequent target of harassment, violent assaults, and arbitrary detention from authorities. In June 2007, Chen successfully evaded media censorship to get an advertisement to “salute the mothers of victims” of June Fourth published in the Chengdu Evening News, a prominent state newspaper. After authorities realized what had occurred, however, Chen was put under “residential surveillance” for six months, on suspicion of “inciting subversion.” In 2011, police put Chen under house arrest after online calls went out for Chinese citizens to take part in “Jasmine Rallies.” In May 2013, Chen was badly injured in an altercation with hired thugs and security officers when he tried to prevent the government-ordered demolition of his home.