Chinese authorities must immediately end their prosecution of citizen journalists

May 11, 2021       Comments Off on Chinese authorities must immediately end their prosecution of citizen journalists 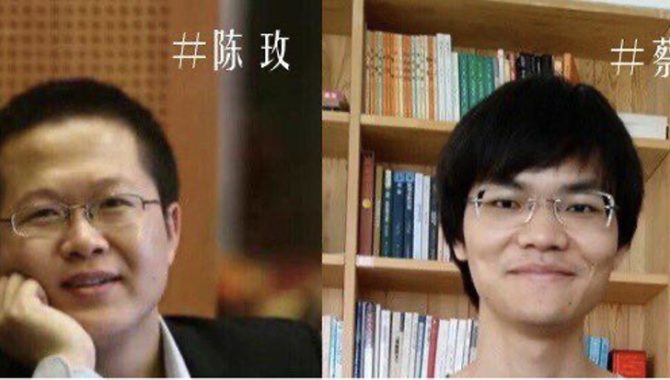 (Chinese Human Rights Defenders—May 11, 2021) CHRD denounces Chinese authorities for putting on trial two citizen journalists, Chen Mei and Cai Wei, on the charge of “picking quarrels and provoking trouble” at Beijing’s Chaoyang District Court on May 11. The two volunteered for a website that documented censored COVID-19 outbreak information, among many other topics, and were detained more than one year ago. The trial ended without a verdict. The court will pick another date to announce the sentences. Exercising their rights to freedom of information and media freedom must not be punished as a criminal act. The Chinese government must free Chen Mei and Cai Wei immediately and unconditionally.

Chen’s mother and Cai’s father attended the trial, though other family members were barred from attending. The trial was not open to journalists and other members of the public.

According to Chen Mei’s brother, who spoke to his mother, the two defendants, covered by PPE, wore handcuffs and leg shackles throughout the trial.

The main “criminal facts” that the prosecution presented in trial involved online messages posted on the BBS of Terminus2049, a Github website, which Cai Wei developed and Chen Mei managed. The prosecution claimed that the messages contained “a lot of misinformation, inciting people’s hearts, defaming state leaders, causing negative influence on the images of state leaders and the state.”

Chen Mei’s government-imposed lawyer said nothing. The lawyer spoke briefly, but did not defend Chen Mei from the charge. Rather, the lawyer talked about “Western influence” misleading Chen on the “wrong path” during college.  Cai Wei’s government-imposed lawyer also did not defend his innocence, but cited some legal provisions and asked the court for light sentencing.

As if coordinated prior to the trial, the prosecutors proposed a sentence of 15 months. The defendants pleaded “guilty” as charged in court. Chen Mei passed word to his mother through his lawyer that, unless the sentence far exceeds the proposed time, he would not appeal.

“By maintaining a website that archived censored news articles, Chen Mei and Cai Wei’s voluntary work is historically invaluable in understanding how the Chinese government tackled the COVID-19 outbreak and how the Chinese public reactions evolved over time.  However, it is precisely because the website they maintained archived a treasure trove of censored news articles and unvarnished comments that the Chinese government views the two young men a threat to its agenda to control and shape the domestic and international narratives about the COVID-19 outbreak,” said William Nee, CHRD’s Research and Advocacy Coordinator.

Chen Mei and Cai Wei disappeared on April 19, 2020 in Beijing. The pair worked as volunteers at the Terminus2049, a Github website, which documented news and articles about COVID-19 that were censored by the Chinese government. On April 23 and 24, the families of Cai Wei and received written “residential surveillance in a designated location” notices from Chaoyang District PSB that cited the criminal charge as “picking quarrels and provoking trouble.” Chen Mei’s family did not receive any RSDL notice. Chaoyang District PSB formally arrested Chen Mei and Cai Wei on charges of “picking quarrels and provoking trouble” on June 12, 2020. Chen Mei was indicted on September 21, 2020 and his case was sent to Chaoyang District Court in Beijing.

“It’s outrageous that the Chinese government are prosecuting citizen journalists, which should be a clear reminder and an alarming sign that Chinese authorities are sticking to their refusal to engage in any serious and honest inquiry into their own mishandling of the deadly coronavirus outbreak,” said Renee Xia, CHRD director.