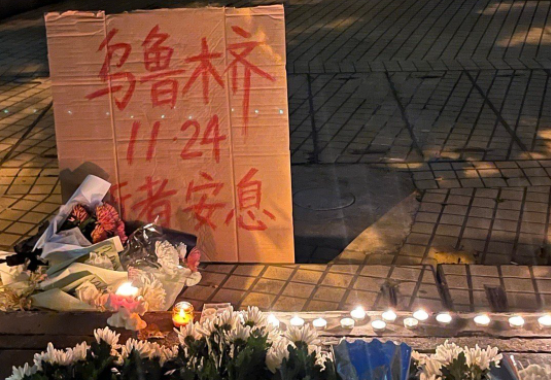 (The Network of Chinese Human Rights Defenders, December 9, 2022) Ahead of International Human Rights Day on December 10, CHRD celebrates the courage and bravery of human rights advocates and calls on the Chinese government to stop violating its obligations to protect human rights and free those detained for exercising their human rights. We urge the international community to keep hope alive and continue supporting defenders on the forefront.

Yet we are encouraged by the glimmers of hope that have emerged in the recent protests. The protests demanding political changes began with spontaneous gatherings to pay tribute to Uyghur victims in the Urumqi Fire. The rapidly spreading protests, led by youth, likely proved to be the last straw in forcing the Chinese Party-State to reverse course on its draconian “zero-COVID” measures.

The scope of this short-lived wave of protests in cities across China was enormous, comparatively speaking. Thus far, there have been at least 68 protests across 31 cities since November 25, according to the Australia Strategic Policy Institute (ASPI).

And it has largely been young people who have led the protests. The Urumqi apartment complex fire, which took the lives of at least ten Uyghur women and children, as rescue was obstructed by barriers thought to be erected for COVID lockdown but likely for  “counter-terror” measures, brought people into the streets to mourn the loss of lives, to assemble and speak out against the devastating zero-COVID control and the political system that made such control possible.

The young protesters in China, motivated by their insuppressible yearning for change, should give us hope that such a new energy is alive in China.

As one woman who protested in Shanghai said, the protests gave her hope for a different China: “I didn’t have any expectations for this country. Every time I think about that day, I really just want to cry.”

“The world’s most systematic and sophisticated propaganda, censorship, and surveillance apparatus have failed in brainwashing the youth and could not extinguish their aspirations for freedom and dignity,” CHRD’s Director Renee Xia said.

Solidarity protests have sprung up worldwide on college campuses

Overseas Chinese students and the diaspora community have gathered in rallies and candlelight vigils in Tokyo, London, Vancouver, Taipei, Washington DC, Melbourne, Hong Kong, and many other major world cities in support of the recent protests and detained demonstrators in China.

There seems now to be a new outburst of energy across campuses around the world. When a lone protester, physicist Peng Lifa, spread a banner over a bridge in Beijing just before the 20th Party Congress in October, his solo protest seemingly had little impact on the ground at the time. Peng was quickly arrested, and news of the protest was censored.

Yet, to the surprise of everybody, Peng’s brave protest inspired Chinese youth across China and now all around the world. There were more than 350 follow up demonstrations where protestors echoed his demands:

“We want food, not COVID testing; We want reform, not the Cultural Revolution; We want freedom, not lockdowns; We want to vote, not a leader; We want dignity not lies; we are citizens not slaves!” “Depose the traitorous dictator Xi Jinping”.

As one Han student told the New York Times, “I now have every reason to believe that Uyghurs have suffered unimaginably.”

Over the past decade and more, the Chinese government’s grave human rights abuses have taken place in Xinjiang, Tibet, and Hong Kong. Vibrant human rights movements have formed in these communities as a result, but they have had difficulty getting their messages heard by Mainland Han-majority people, largely due to state censorship and propaganda.

For the moment, at least, in the quickly cordoned off vigils in Chinese cities, and now around the world, many Chinese have mourned for the Uyghur victims of the Urumqi Fire. Chinese netizens have expressed remorse for not supporting the 2019 pro-democracy protests in Hong Kong. Two Chinese protestors who are engaging in a hunger strike at Apple’s headquarters in California are calling on the company to stop labor exploitation at Foxconn, restore  the “AirDrop” function, which Apple stopped offering in Chinese IOS updates in November, and they urged Apple not to aid the Chinese government in censorship by banning apps on the Chinese app store. Perhaps most significantly, they are calling on Apple to condemn the incarcerations of Uyghurs.

The new activism could open up space to reflect on tough questions. A Han Chinese feminist wrote about the complexity of attending a vigil to commemorate the Urumqi Fire victims without knowing the fire victims’ names or that the fire victims may have died because the apartment complex was blocked as part of a racist security crackdown against Uyghurs even before COVID. The activist provocatively asked:

“How could the Han Chinese retain their self-respect while pretending to be compatriots of the Uighurs? After so many years of ignoring the painful ethnic cleansing of their compatriots, most Han Chinese started to shout about ‘compatriots’ but only for the cause of their own freedom.”

The protests brought about an awakening and cracked open an opportunity for the Chinese population to confront the human rights violations against Uyghurs, which have at times been downplayed or denied.

This should give us hope as we continue to confront the human rights crisis in regions ruled by Xi’s authoritarian state.

Earlier this week, CHRD along with 48 other NGOs called on the Chinese government to respect freedom of assembly and expression and ensure the rights of all who have been detained. We warned that the Chinese police are committing a new round of enforced disappearances, while human rights lawyer Tang Jitian, who was taken away by authorities before he was set to attend an International Human Rights Day event hosted by the EU Delegation to China in Beijing on December 10, 2021, remains in a state of enforced disappearance.

“Many challenges remain. On this International Human Rights Day, stakeholders in the international human rights community should appreciate that the protestors are showing us that not all hope is lost for a democratic China, where human rights and rule of law will be respected,” said William Nee, CHRD’s Research and Advocacy Coordinator.

“While we find relief in the dismantling of authoritarian control and infringement on freedom and livelihood under Xi’s zero-COVID regime, what we must not overlook is that a window opened briefly by the protests to allow the outside world to peek in and see hope,” said Renee Xia, CHRD’s Director.

“Days’ and even years’ protests may not realistically revolutionize a powerful regime, but even forcing its policies to be just a little more humane, a bit less brutal, is a victory. Nurturing the seeds and forces for such changes is vital, though it requires patience and persistence,” Xia added.