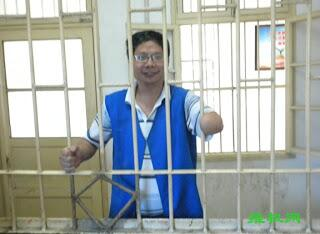 (Chinese Human Rights Defenders, September 10, 2013) – Chinese authorities have criminally detained two more activists involved in peaceful assembly while rounding up hundreds of microbloggers, as part of the government’s assault on “Western ideals” such as rule of law, a free press, and other officially disparaged “universal values.” Last week, police in Anhui Province criminally detained Zhou Weilin (周维林) and Yao Cheng (姚诚), who protested a case of flagrant violation of children’s education rights due to a parent’s political views earlier in the spring. The demonstrations, which spread over March and April, concerned a dissident’s 10-year-old daughter, Annie Zhang, who was barred from attending school in February. Meanwhile, hundreds of bloggers have been detained in the past few weeks as judicial authorities have expanded the scope of criminalization for online expression.

The detentions in Anhui follow the criminal detention of two others who also took part in the protests in support of Annie Zhang; Zhang Lin (张林), Annie Zhang’s father, was detained in July, and Li Huaping (李化平) was seized in August.[1] On September 6, police detained Zhou Weilin, an activist based in Hefei City, and also searched his home and confiscated computers, cell phone, and publications. A notice sent to his family said that Zhou is being held on suspicion of “gathering a crowd to disrupt the order of a public place”[2] On September 3, police detained Yao Cheng (姚诚), a rights activist in Hefei and former military officer. At this point, the alleged “crime” that Yao is suspected of is unclear, while Zhou Weilin, Zhang Lin, and Li Huaping are all facing a charge of “gathering a crowd to disrupt order in a public place.” Back in April, Zhou and Yao served administrative detentions when police disrupted a rally and detained protesters.

In addition, Anhui police have gone to Sichuan Province to question another activist, Chen Yunfei (陈云飞), about his role in the protests, apparently trying to gather information about any role that Zhang Lin and Li Huaping may have played in organizing the rallies.[3]

“Government reprisals against these activists makes it clear that freedom to peaceful assembly and children’s right to education must be among the ‘universal values’ denounced by the Chinese leaders these days,” said Renee Xia, international director of CHRD. “Punishment against children on the basis of their parents’ beliefs has become rather routine, and violates Article 2 of the Convention on the Rights of the Child.”

A recent CHRD report on the rights of children points out that this type of punishment is common. Authorities target children in order to retaliate and intimidate activists, resulting in their children also becoming victims of political suppression. The report details incidents of retaliation involving the children of human rights lawyer Gao Zhisheng, legal advocate Chen Guangcheng, and activist Guo Feixiong.[4]

Over much of this year, Chinese leaders have aggressively attacked “universal values”—which, according to state media, apparently include such things as rule of law, constitutional democracy, and press freedom—while launching a harsh crackdown on civil liberties. A memo from senior leaders to Party members that surfaced last month urged an assault on “Western ideals,” including democracy and human rights.[5] Echoing this policy, authorities since March have detained, arrested or disappeared more than 50 individuals in Beijing and the provinces of Jiangxi, Hubei, Jiangsu, Guangdong, Anhui, and Hunan.[6]

Since the end of August, state media in China has reported on the detention of hundreds of people, including online commentators and citizen journalists, who use weibo to disclose corruption and injustice while discussing incidents of social and political note. Well-known bloggers, including some with hundreds of thousands of followers, have been taken into custody for “creating” or “spreading rumors” and for “defamation” based on their online activities.[7] On September 9, China’s highest judicial authorities—the Supreme People’s Court and Supreme People’s Procuratorate—issued an interpretation that makes “spreading rumors” and “defamation” online crimes punishable according to Chinese law. The judicial authorities specify that any “rumor-spreading” or “defaming” online post, if it has been clicked or viewed at least 5,000 times, or re-posted at least 500 times, would be considered a “serious offense,” and its author would face imprisonment for up to three years according to Article 246 (1) of the Criminal Law.[8]

By attacking “universal values” and detaining a large number of people for exercising and defending human rights, including the rights of the child, Chinese leaders are showing defiance to the UN Committee on the Rights of the Child’s review on China (coming up on September 26-27), and the Human Rights Council’s Universal Periodic Review, which is scheduled to review China in October.

The Chinese government apparently counts on getting away with the contradiction and discrepancies between its most recent assaults on human rights and its campaign to be re-elected to the Human Rights Council this November, for which China has made a voluntary pledge to respect “the principle of the universality of human rights” and make “unremitting efforts for the promotion and protection of the human rights and fundamental freedoms of the Chinese people,” promising that “China earnestly fulfils its obligations under relevant international human rights treaties.”[9]

CHRD urges the UN Committee on the Rights of the Child to inquire into the alleged violation of Article 2 of the Convention on the Rights of the Child by the Chinese government through its routine practice of punishing children on the basis of their parents’ beliefs or activities, as well as other failures by the government to protect rights of the child as documented in CHRD’s report submitted to the Committee, “‘Flowers of the Country’: Mistreated and Abused.”[10]

During the Universal Periodic Review on China, to be conducted by the Human Rights Council in Geneva on October 22, other governments should hold China accountable for failures to fulfill its treaty obligations, and for violating basic human rights and fundamental freedom adopted in the Universal Declaration of Human Rights.

CHRD believes that the Chinese government has disqualified itself for membership on the Human Rights Council. It has breached its own voluntary pledges to “respect the principle of the universality of human rights,” a pledge made by China in the run up for election during the 68th Session of the UN General Assembly in New York in November.  A vote in favor of China’s membership on the Council by any government would make a mockery of the fundamental principle—the promotion of universal human rights—of the UN body.

Anhui activist Zhou Weilin (周维林), 48, is now among more than 50 activists who have been criminally detained for peaceful assembly and association since March 2013.

[4] “‘Flowers of the Country’: Mistreated and Abused,” CHRD