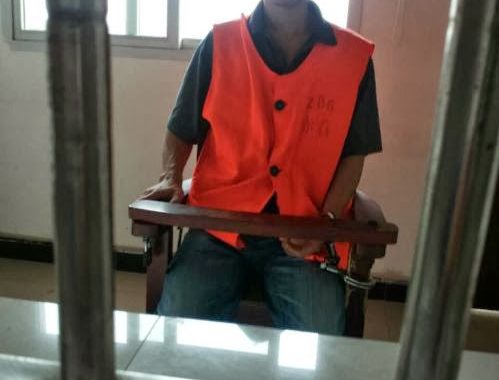 Authorities in the provinces of Guangdong and Anhui have reportedly given verbal confirmation of the formal arrests of activists Guo Feixiong (郭飞雄, aka Yang Maodong, 杨茂东) and Zhou Weilin (周维林), respectively. In Guangzhou, a local procuratorate official reportedly have told Guo’s lawyers that he was formally arrested on September 11. Guo’s lawyers’ repeated requests to meet with him at Tianhe District Detention Center have been denied. Guo’s family has not received an arrest notice. Guo Feixiong was taken into custody on suspicion of “gathering a crowd to disrupt order of a public place” in early August.

Police in Anhui told Zhou Weilin’s family on October 14 that Zhou was formally arrested and that the family should soon receive an official notice about Zhou’s arrest on charges of “gathering a crowd to disrupt the order of a public place.” Detained at Feixi County Detention Center, Zhou was seized on September 6 for protesting authorities’ barring of Annie Zhang, daughter of activist Zhang Lin (张林), from attending school in Hefei City.[1]

Lawyers representing Jiangxi-based activists Liu Ping (刘萍), Li Sihua (李思华), and Wei Zhongping (魏忠平), who arrived at Xinyu City on October 14 to begin pretrial work on their cases, were told that the court again postponed the trial. The three have been detained for six months—since April—and arrested for more than four months without trial. Authorities have changed and added new criminal charges during this period of time. Meanwhile, other activists in the area and a family member have been put under soft detention, including activists Huang Huimin (黄慧敏) and Zou Guiqin (邹桂琴) along with Liu Ping’s brother. These individuals need permission to leave their homes, and Xinyu authorities also have sent guards to follow them, moves likely meant to prevent them from communicating with the detainees’ lawyers. All three of the arrested Xinyu activists ran for seats in their local People’s Congress, participated in a recent anti-corruption campaign, and demanded the Chinese government ratify the International Covenant on Civil and Political Rights, which China signed in 1998.[2]

According to family members of Beijing-based activist Cao Shunli (曹顺利), they still have not received any official notice or been informed by authorities of Cao’s purported criminal detention, and Cao’s whereabouts are still unknown more than a month after she was seized. A fellow activist who, like Cao, has demanded civil society participation in China’s Universal Periodic Review (UPR) was reportedly told by police interrogating her that Cao had been put under criminal detention on September 28 on order of the Ministry of Foreign Affairs. Authorities abducted the 52-year-old Cao at Beijing Capital International Airport on September 14, just as she was heading to Geneva in order to take part in a training on UN human rights mechanisms. Her family has not hired a lawyer to represent Cao due to this lack of clarity of her status. Instead, her family is reportedly hoping that she will be released after October 22, when the UPR on China will take place before the UN Human Rights Council.[3]

Detained Hubei activist Liu Jiacai (刘家财) appears to be dealing with worsening health while in detention, according to his lawyer, who met Liu at Yichang City No. 1 Detention Center on September 22. Liu’s wife said that her husband has a heart problem, and she has not been able to visit or receive information about his condition in detention since Liu was taken into custody in early August.

In Chibi City, activist Yuan Fengchu (袁奉初, aka Yuan Bing, 袁兵) was allowed to meet with his lawyer for the first time on October 8, almost five months after he was seized. Yuan told his lawyer that a fellow cellmate in Chibi City Detention Center had beaten him, but that a prison guard had ignored this complaint. Yuan was detained in late May while on an “advocacy tour” that was intended to encourage civic activism and promote democracy and rule of law.[4] 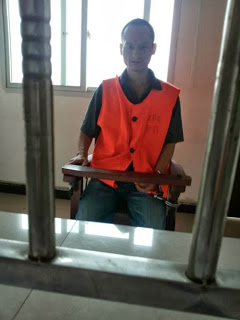 Hubei activist Yuan Fengchu (袁奉初) was recently beaten in a detention center and required stitches to close a wound.

The lawyer of Shenzhen-based activist Yang Mingyu (杨明玉, aka Yang Lin, 杨林) was recently denied a visit with his client. Lawyer Li Jinglin (李静林) went to see Yang at Futian District Detention Center on October 16, but he was told that Yang was not there. After Li demanded to know where Yang is, a local procuratorate official informed him that the activist is now being detained at Shenzhen City No. 2 Detention Center. When lawyer Li went to that facility, guards there claimed they could not locate Yang’s name in the center’s registration system. After going back and forth between the two locations, the lawyer learned that Yang’s case was considered to involve “state secrets,” hence his name was not recorded in the registration system. Still, guards agreed to pass the lawyer’s request on to their superiors. Arrested on suspicion of “inciting subversion of state power” on July 19 after being held incommunicado for more than a month, national security officers reportedly threatened Yang by saying that he could be made to disappear.[5]

CHRD has confirmed the criminal detentions or disappearances of more than 60 individuals in China who have been seized in the ongoing crackdown, 31 of whom have been formally arrested.

Beijing authorities formally arrested Chongqing-based reporter Liu Hu (刘虎) on September 30 for “libel” in retaliation for his work critical of official wrongdoing, about a month after criminally detaining him on suspicion of “creating a disturbance.” The 38-year-old Liu, a journalist with Guangzhou-based News Express (新快报) has revealed corruption and abuses of power by local and higher level officials. Just before he was detained, Liu exposed malfeasance and embezzlement on the part of Ma Zhengqi (马正其), deputy minister of the State Administration for Industry and Commerce. Liu is being detained at Beijing No. 1 Detention Center.[6]

CHRD has released a list of suggestions to UN Member States that will review China and make recommendations at next week’s Universal Periodic Review (UPR) at the UN Human Rights Council, an international review of China’s rights record that takes place once every 4½ years. The list includes, but is not limited to:

(See the full list of CHRD Suggestions for UPR Recommendations to China).

In September 2013, CHRD brought in front of the UN human rights experts two cases involving reprisals by Chinese authorities against two activists, Cao Shunli (曹顺利) and Chen Jianfang (陈建芳), who were seized just prior to boarding flights to Geneva to attend UN human rights activities, including a training on rights mechanism and a session of the Human Rights Council. These actions by authorities are part of a clampdown on citizens’ demand to have a role in the upcoming UN review of China’s rights records.[7]

Read CHRD’s suggested recommendations (PDF) for the Chinese government in the run-up to the second UPR on China, which will take place in Geneva on October 22.

[3] “Cao Shunli Has Been Detained Over a Month, Family Still Have Not Received Any Notice” (曹顺利被羁押月余，家属仍未获任何通知), October 16, 2013, WQW