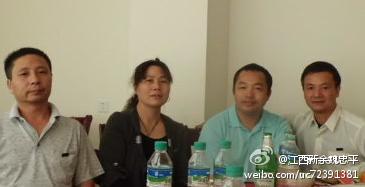 (Network of Chinese Human Rights Defenders, October 29, 2013) – A Chinese court had to suspend the trial of activists Liu Ping (刘萍), Wei Zhongping (魏忠平), and Li Sihua (李思华) on October 28 in Jiangxi Province after defendants and lawyers protested myriad violations of legal rights. A lawyer told CHRD that the prosecutors and the court were pushed back in their attempt to rush the trial to a conclusion and convict the activists.

The defendants’ six lawyers, Zhang Xuezhong (张雪忠), Zheng Jianwei (郑健伟), Liu Jinbin (刘金滨), Chen Guangwu (陈光武), Pang Kun (庞琨), and Li Jinxing (李金星), demanded that the three be freed or, if the trial was to resume, released into residential surveillance or granted bail awaiting trial. The lawyers cited their defendants’ prolonged pre-trial detention, which has gone beyond the 3-month limit allowed by Chinese law (Article 202(1) of the Criminal Procedural Law). The attorneys asked the presiding judges to step down from handling the cases after they had filed a lawsuit on October 15 pressing for criminal accountability for illegally prolonging the activists’ detention. The court turned down the request. During the trial, the lawyers told the court, Yushui District People’s Court in Xinyu City, that they could no longer properly defend their clients’ legal rights. And the defendants said that their cases could not get a fair hearing such that they must dissolve the obligation of their lawyers.

As the defense attorneys walked out of the court, the judges scrambled to control order and ended up announcing that the trial was suspended and would resume later. The defendants now have 15 days to hire lawyers before continuing with the trial. They said they would not accept court-appointed lawyers, and nor would they wage their own defense. The three activists’ trial was originally set to take place in July but was delayed. (See lawyers’ statement on the court proceedings in Chinese.)

The presiding judge at court reportedly did not allow the defendants to make their statements. At one point, the judge interrupted Li Sihua when he began describing how he was beaten while detained, and repeatedly cut off Liu Ping when she tried to speak. According to Liu’s daughter, who attended the hearing, the judges gave warnings to the lawyers when they raised specific concerns and then prevented them from speaking altogether.

Liu, Wei, and Li have been detained since late April on suspicion of “inciting subversion of state power,” but local authorities later added new criminal charges. All three were formally arrested on June 4 on grounds of “unlawful assembly,” but Liu and Wei were also charged with “gathering a crowd to disrupt order of a public place” and “using cult to undermine implementation of the law.” Weeks before the scheduled trial on October 28, Xinyu police began to put under soft detention activists in the area and some of Liu’s family members. Police also blocked activists in other parts of China from traveling to Xinyu and detained Liu Xizhen (刘喜珍), an activist who had planned to appear in court as a witness.

Liu Ping and Wei Zhongping are being held at Xinyu City Detention Center while Li Sihua is detained at Fenyi County Detention Center. Frequent targets of retaliation for their activism, the three all ran for seats in their local People’s Congress elections in 2011, participated in a recent anti-corruption campaign, and demanded the Chinese government ratify the International Covenant on Civil and Political Rights. They have been involved in the “New Citizens Movement,” a loose network of activists who have peacefully promoted social justice and political and legal reforms since 2011. The movement has been spearheaded by the prominent legal advocate Xu Zhiyong (许志永), who has also been arrested along with rights lawyer Ding Jiaxi (丁家喜) in the crackdown on freedom of assembly, association, and expression since March.

(From left to right) Wei Zhongping, Liu Ping, Ding Jiaxi, and Li Sihua. All four have been detained in the recent crackdown on freedom of assembly, association, and expression.