A Nightmarish Year Under Xi Jinping’s “Chinese Dream”: 2013 Annual Report on the Situation of Human Rights Defenders in China

March 3, 2014       Comments Off on A Nightmarish Year Under Xi Jinping’s “Chinese Dream”: 2013 Annual Report on the Situation of Human Rights Defenders in China 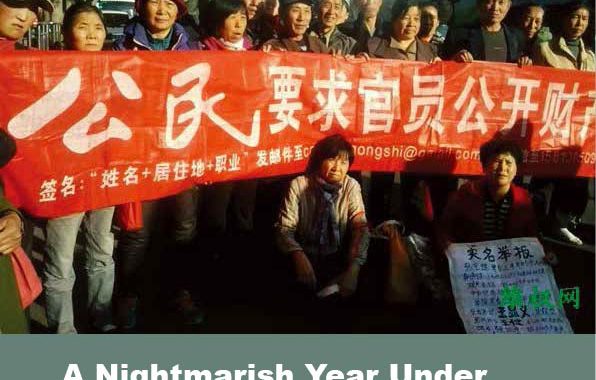 “2013 saw the harshest suppression of civil society in over a decade…with human rights and rule of law basically going backwards. Still, the drive in Chinese civil society to keep fighting under difficult and dangerous conditions is the most important asset for promoting human rights and democratization in the country.”

In speaking with CHRD, dozens of Chinese activists have described 2013 as the worst year for human rights since at least 2008, which saw crackdowns on civil liberties around the Beijing Olympics and on the Charter 08 campaign for reform. Some activists went so far as to say that 2013 saw the most severe level of suppression of any period since the late 1990s, when many organizers of the Democracy Party of China were jailed.

By the time the current leadership took full control of top Chinese Communist Party (CCP) and government posts in March 2013, a sweeping crackdown was underway. Authorities gutted advocacy platforms forged by human rights defenders (HRDs) both in city streets and cyberspace, criminalizing peaceful acts of assembly, association, and expression en masse. Activists who communicated with CHRD pointed out that the number of activists detained on criminal charges in the 2013 crackdown even surpassed that in any period of suppression since the late 1990s. They further commented that reprisals against human rights defenders have gone hand-in-hand with growing civil society activism, observing that 2008 ended with the detention of dissident Liu Xiaobo (刘晓波), the 2010 Nobel laureate who is serving an 11-year prison sentence, while 2013 ended with the government having incarcerated hundreds of activists (see CHRD profiles of prisoners of conscience).

In 2013, Chinese citizens inspired by the “New Citizens’ Movement” (新公民运动) took to the streets to rally for anti-corruption measures, calling for public disclosure of top Chinese officials’ personal wealth.

The government’s tactics of repression in 2013 pointed to detectable shifts from the past, as reflected in partial data compiled by CHRD. CHRD documented more than 220 criminal detentions of human rights defenders in 2013—a nearly three-fold increase from the previous year—including dozens who have been arrested and will face trial. As seen through CHRD’s data for 2013, there were also three times more recorded cases of “enforced disappearances” compared to the year prior. In fact, known “enforced disappearances” even exceeded the total from the widespread crackdown on civil society in 2011, when Chinese authorities reacted to online calls for “Jasmine rallies” inspired by political upheavals then taking place in North Africa and the Middle East.

In perhaps the most notable change in the government’s tools of repression, detentions in Re-education through Labor (RTL) camps slowed to a trickle in 2013, and the government finally announced in November that RTL would be abolished. While human rights observers have welcomed the news, the system’s impending “dissolution” is fraught with questions. For example, Chinese lawyers have expressed concerns about how the CCP will phase out the system, as have human rights groups, both wary of the government’s reliance on abusive systems of extralegal detention.

In 2013, top CCP leaders unleashed a bellicose attack on “universal values” that re-asserted the new leaders’ contempt for things such as rule of law, constitutional democracy, and freedom of the press. A memo from senior leaders to government officials that surfaced in the summer, known as “Document No. 9,” urged an assault on “Western ideals,” including democracy and human rights. Despite the Chinese government’s flagrant disregard of fundamental human rights principles, China was re-elected in November to a third term on the Human Rights Council in a politicized vote devoid of serious human rights considerations.

The government barely concealed its fear of losing its grasp on “stability” as it reacted strongly to HRDs who pushed for modest changes in policies—such as more transparency of Party leaders’ wealth or children’s equal right to education—by charging them with crimes like “gathering a crowd to disrupt order of a public place” and “unlawful assembly.” To a degree, the levying of such charges departed from some of the government’s prevailing practices in persecuting HRDs. In avoiding overtly political charges that have often been used to convict activists and dissidents, such as “inciting subversion against state power,” “subversion against state power,” or “leaking state secrets,” authorities sought to play down the political motivations behind the crackdown.

“The Chinese government’s extraordinary measures in trampling human rights dispelled any hope that President Xi’s new administration would be tolerant of diverse voices in a more open society,” said Victor Clemens, CHRD research coordinator. “Xi Jinping has touted the “Chinese Dream” of economic growth under iron-fisted maintenance of political stability, while ushering in his draconian policies.”

Even with the unrelenting attack on HRDs, 2013 will also be remembered as a year that saw encouraging developments in China’s civil society. “One unequivocal sign of growing and vibrant activism was precisely authorities’ strong reaction to peaceful gatherings and public expression of dissent,” said one Chinese activist, who prefers to remain anonymous for fear of reprisal from the government.

The strident nature of the 2013 crackdown testifies to how citizens’ organized support for rule-of-law reforms and human rights protections reached a new height, unnerving the country’s leaders who fear, above all, an increasingly assertive civil society that poses strong challenges to their legitimacy to rule. Indeed, the scale of the crackdown revealed Chinese leaders’ fear that their grip on power faced a serious enough challenge from civil society sectors that they had to strike hard against its leading activists.

In releasing this report, CHRD also urges the Chinese government to take effective measures to ensure that human rights defenders can carry out their work promoting human rights in a freer and safer environment, including by: ratifying the International Covenant on Civil and Political Rights, respecting the Chinese Constitution, freeing HRDs detained for exercising their rights to assembly, association, and expression; ending harassment and violence against human rights lawyers; immediately ceasing illegal detention in “black jails”; and guaranteeing that all citizens of China, including ethnic minority groups and religious groups, can exercise freedom of religion, belief, and private worship.