China Has Obligation to End Violence Against Lawyers

April 3, 2014       Comments Off on China Has Obligation to End Violence Against Lawyers (Network of Chinese Human Rights Defenders – April 4, 2014) – CHRD is alarmed at the recent violent attacks by police and thugs against dozens of lawyers and their supporters in Heilongjiang Province, in another episode of human rights lawyers being assaulted in retaliation for defending their clients. Since initially detaining four lawyers on March 21—Zhang Junjie (张俊杰), Jiang Tianyong (江天勇), Tang Jitian (唐吉田), and Wang Cheng (王成), who represented Falun Gong practitioners held in a black jail—police in Jiansanjiang City have seized other lawyers and activists who went to demand the lawyers’ release; at the time of writing, authorities have issued a total of at least 23 administrative detentions tied to the events. CHRD urges the Chinese government to investigate the reported cases of violence, arbitrary detention, and threats against these individuals and hold the perpetrators criminally accountable.

“Violence against lawyers highlights the government’s strong opposition to their work and a disregard for legal rights,” a lawyer who wished to remain anonymous told CHRD. “The situation in Jiansanjiang displays a particular hostility towards human rights lawyers because they stand for the idea of the law’s independence.”

Lawyer Zhang Junjie was severely beaten after he was detained with the three other lawyers on March 21 when they uncovered detentions in a so-called “legal education base,” a black jail where Falun Gong practitioners are subjected to torture and coercion to force them to abandon the spiritual discipline. While being interrogated, Zhang was struck on the head, knocked to the floor, and beaten and kicked for several minutes, leaving him with excruciating pain in his back (see Zhang’s account in an English translation). After his release from a five-day administrative detention, Zhang was found to have three broken ribs along with other injuries all over his body.

The other three lawyers received 15-day administrative detentions for “using cult activities to disturb social order” and are feared to have also been subjected to torture. In the first of a series of seemingly coordinated movements in the early morning of March 29, lawyer Wang Quanzhang (王全章), who along with many others had gone to seek the lawyers’ release, was seized from his hotel, blindfolded with a black hood, had his hands tied with tape, and was dragged off to a police station. There, two police officers beat him, with one slamming Wang’s head against a wall. Other lawyers, including Wang Shensheng (王胜生) and Fu Yonggang (付永刚), were also seized that morning, blindfolded, had their hands tied up, and were dragged away. A group of supporters of the detained lawyers were taken away in a similar fashion, and some were verbally and physically assaulted during the police interrogation before being released. A coalition of lawyers has reported that at least 12 supporters and lawyers have been administratively detained for “gathering a crowd to disrupt social order.” (For more details on these incidents, see report).

Jiansanjiang authorities claimed that 11 individuals were administratively detained on March 22 for “shouting Falun Gong slogans in front of government buildings,” and that they were “punished according to the law for gathering cult members to disrupt social order in the name of lawyers,” according to a statement published by Xinhua on April 1. 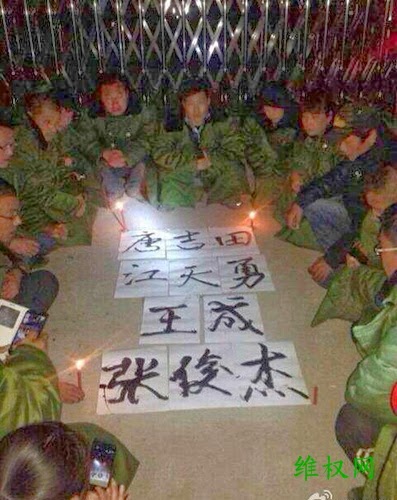 Human rights lawyers in China have increasingly been targeted for violent assaults ordered or conducted by authorities in recent years. An often-unidentifiable mix of police officers, other government personnel, and hired thugs commit the abuses while enjoying impunity for their criminal actions.

“This is a troublesome trend,” said Victor Clemens, CHRD’s research coordinator. “The use of violence against lawyers undermines the Chinese government’s pledges to protect lawyers’ basic rights as a key component of fostering rule of law.”

Especially since last year, reports have spiked of attacks on Chinese lawyers who authorities seek to retaliate against for taking on “sensitive” cases or challenging violations of legal procedures. Among those most brazenly assaulted in 2013 were lawyers trying to defend members of a Christian “house” church and others supporting activists seized in the crackdown on civil society. These violent acts now complement administrative obstacles that authorities have more commonly used to impede human rights lawyers, such as license revocation or delaying their annual license renewal. (See CHRD’s 2013 annual report for more information.)

“The Chinese government is culpable in using violence against lawyers if the government allows the perpetrators in Heilongjiang to go unpunished,” said Renee Xia, international director of CHRD. “The fact that lawyers have no protection from police violence while doing their job reflects very poorly on top leaders who claim repeatedly that ‘China is a country ruled by law,’” said Xia.

At the Third Plenary Session of the 18th Central Committee of the Chinese Communist Party (CCP) last November, top CCP officials reiterated the promise of making rule of law a cornerstone of society, and specifically claimed that China has prohibited torture in police interrogations. These ideals are clearly far from being met since Chinese human rights lawyers have no protections for their own safety and a secure working environment. Lawyers’ free and protected work reflects and strengthens the rule of law.

Following the UN Human Rights Council’s Universal Periodic Review of China’s human rights record in October 2013, the government “accepted” recommendations pushing for better rights protections for lawyers. China stated that the Lawyers Law and the Criminal Procedure Law, amended in 2007 and 2012, respectively, “offer strong guarantees for lawyers to perform their duties.” Unfortunately, these “guarantees” about how smoothly lawyers are able to work do not mesh with realities on the ground in China.

CHRD calls on the Chinese government to honor both its domestic and international commitments to protect lawyers and allow them to defend their clients independently and freely without fear of reprisals.