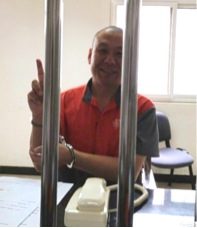 On July 2, 2013, national security guards took away activist Zhang Xiangzhong (张向忠) for questioning, shortly after they had followed him home from Beijing No. 3 Detention Center, where he had left money for detained activists. He was then criminally detained on charges of “gathering a crowd to disrupt public order” but tried for a different crime nearly a year later. Zhang’s family did not receive formal notification of either his criminal detention or arrest. During the prolonged pre-trial period, police barred Zhang’s lawyers from meeting him several times. According to one of his lawyers, “credit card fraud” was a trumped-up charge used to retaliate against him for taking part in public protests that began in early 2013 calling on top Chinese officials to disclose their wealth.

On the day of Zhang’s trial, his lawyers were not allowed to make any statement related to Zhang’s activism in the New Citizens’ Movement, a loose grouping of activists advocating for democratic and rule-of-law reforms. The judge forced the lawyers to instead defend Zhang against the fraud charge, even though most of the case file was related to Zhang holding up banners promoting different activist causes. Zhang was sentenced on an unknown date to three years in prison, and eventually released in July 2016, having completed his full sentence.

Born in 1969, Zhang Xiangzhong is originally from Shandong Province but went to Beijing for work. He later became involved with the Open Constitution Initiative, a pro-democracy organization banned by authorities in 2009 but which eventually spawned the New Citizens’ Movement. He is among dozens of activists swept up in the crackdown on freedom of assembly, association, and expression that began in March 2013. That spring, Zhang publicly demonstrated in support of fellow New Citizens’ Movement activists, including Ding Jiaxi (丁家喜), Li Wei (李蔚), and Zhao Changqing (赵常清), who were detained before him. Zhang has been an active netizen promoting rights and social justice, including demanding equal education for rural children.