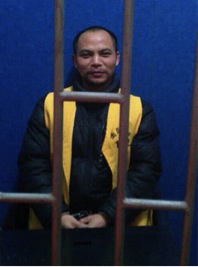 Length of Punishment: 4 years plus 3 years of deprivation of political rights

Hunan police seized rural activist Zhao Fengsheng (赵枫生) in late 2013 from his home and put him under criminal detention on a charge of “subversion of state power,” confiscating his computer and other materials without a warrant. In January 2014, local authorities formally arrested him for “using dangerous methods to endanger public safety,” but he was tried months later on yet another charge. Zhao’s detention is reportedly related to two open letters that he was said to have posted online shortly before he was seized. One was addressed to the Turkestan Islamic Party, which the Chinese Communist Party claimed was the terrorist group responsible for the car attack near Tiananmen Square in late October 2013. In the letter, Zhao supposedly suggested CCP officials and corrupt merchants should be their targets, not innocent civilians. The other letter was a poem titled “Northern Expedition: A Call to Arms,” calling on citizens to defend democracy by conquering the “kleptocratic government.” There are doubts about the real author of these posts and questions about the police attributing them to Zhao. His lawyer brought up these issues at his trial, but the court did not ask prosecutors to prove that these texts were written by Zhao.

Zhao’s trial commenced on June 10, 2014, but was postponed for a week after Zhao’s lawyer, Liu Weiguo (刘卫国), protested violations of legal proceedings. During the trial, Liu said that he learned from national security guards that they listed Zhao as a target months before his detention as part of the crackdown on peaceful assembly, association, and expression that began in March 2013. During his detention, Zhao has developed enteritis, an inflammation of the intestines, and skin allergies, likely due to poor quality food, according to his wife, who also said that he had grown thin. Authorities at Hengyang Detention Center asked her to pay for his medical expenses.

Zhao Fengsheng, born in 1977, is from Hunan Province. In 2009, he organized a group of farmers from across the country to apply for a “National Chinese Farmers’ Association,” and initiated a project for young migrant workers to attend night school in Beijing, efforts praised in state media. He also created a website on issues related to farmers and migrant workers’ rights. Zhao lived under tight surveillance in Beijing until officials pressured his landlord to evict him in 2011, forcing him to return to Hunan. Local authorities also have repeatedly rejected his application for a passport.