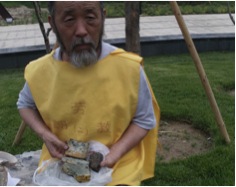 Activist Zhao Zhenjia of Liaoning, who has a record of human rights advocacy going back to the 1970s, was detained on February 9, 2017, while petitioning in Beijing, accused of “disrupting of social order” and engaging in “illegal assembly.” Zhao had allegedly sent a letter to President Xi Jinping in late January 2017 criticizing how authorities have handled petitioners coming to Beijing to present personal grievances to central bodies and officials. Zhao initially served a 10-day administrative detention but then was criminally detained at the end of that punishment. Zhao was tried on August 11, 2017, in proceedings that were open to the public, and his one-year sentence came down over two months later. Zhao was released from prison on

Zhao was previously sentenced to 22 months in prison in December 2014, after being seized at the Beijing South Railway Station on June 9, 2013. Arrested on July 16, Zhao was held incommunicado for weeks before his family members in Liaoning Province received his detention notice. Zhao’s detention stemmed from his participation in public gatherings that commemorated June Fourth and Zhao Ziyang (赵紫阳), the former secretary-general of the Chinese Communist Party who was deposed due to his sympathy for the pro-democracy movement. Zhao Zhenjia had joined an anti-corruption campaign initiated by the “New Citizens’ Movement” (NCM) after his release from Re-education through Labor in early 2013, and he was detained as a part of a nationwide crackdown on freedom of assembly, association, and expression that led to the detention of several NCM members. Zhao’s case for indictment was returned from the procuratorate to the police several times asking for more evidence, which delayed his trial for over a year. Zhao suffered from poor health in detention, but authorities denied his lawyer’s request for bail. He was released on April 8, 2015, at the end of that sentence.

Zhao, born in 1950, has been repeatedly retaliated against for his efforts to seek justice for himself and others. Zhao was branded a “counterrevolutionary” during the Cultural Revolution and sentenced to death with two-year reprieve by the Shenyang City Intermediate People’s Court in 1972. His crimes allegedly involved his writings that expressed critical opinions about Chinese society. In 1974, when his death sentence was to be carried out, his sentence was commuted to a deferred death sentence. He was imprisoned for eight years, during which he was subjected to torture and other mistreatment, until finally being released in 1981. Zhao then began petitioning to seek justice over what he had endured. In 1985, the same court agreed Zhao was innocent and he was cleared of criminal wrongdoing, but it did not offer any compensation. In 2000, Zhao was sent to three years of RTL in retaliation for his petitioning, and he was also briefly detained after bringing firecrackers and petitioning materials to Tiananmen Square in 2008. In the same year, he was given an 18-month RTL sentence. He received the same punishment again in early 2012 after organizing a Chinese New Year gathering of fellow petitioners and also bringing reporters to a black jail, which led to the release of petitioners detained there.