September 23, 2014       Comments Off on CHRD Condemns Sentencing of Uyghur Scholar Ilham Tohti to Life in Prison 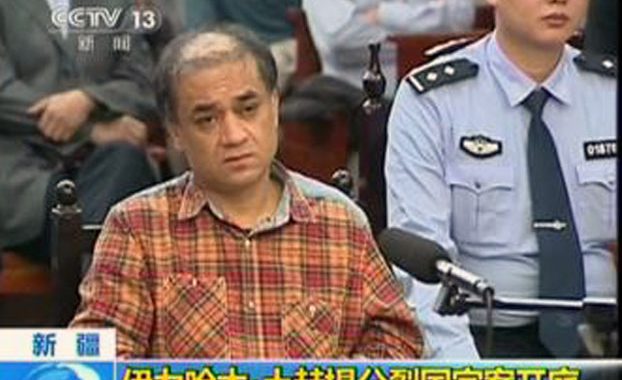 (The Network of Chinese Human Rights Defenders, September 23, 2014) – The Urumqi City Intermediate People’s Court sentenced Uyghur scholar Ilham Tohti (伊力哈木.土赫提) today to life in prison for the crime of “splittism.” CHRD condemns the Chinese government’s persecution of Ilham Tohti for his peaceful advocacy for moderate reform of government policies and for the equal rights of ethnic Uyghur people in the Xinjiang Uyghur Autonomous Region. Ilham Tohti told his lawyers he believes in his own innocence and will appeal for the verdict to be overturned.

“Ilham was only exercising his right to free expression, for which he should not be imprisoned,” said Renee Xia, CHRD’s international director. “The government is trying to lay blame on him for recent violent incidents and divert attention from its own policy failures that have contributed to rising ethnic tensions.”

A professor of economics at the Central University for Nationalities in Beijing, and a founder of the website Uyghur Online, Ilham Tohti was seized by police from his Beijing home in January, and formally arrested on suspicion of “splittism” in February. Seven of his students were also detained and accused of being part of a so-called “separatist group” with him.

Ilham Tohti’s nine-month detention and his trial, held on September 17-18, have been rife with abuses of his human rights and due process rights, in violation of the Chinese law and international standards. While detained on trumped-up charges, Ilham Tohti has been subjected to inhumane and degrading treatment and was denied legal counsel for six months. The court refused to call any of the defendant’s witnesses to testify during the trial. Authorities also barred any members of the public, including diplomats and journalists, from entering the courtroom, while packing it with court staff and government officials. In addition, authorities rejected Ilham Tohti and his lawyers’ request to hold the trial in Beijing, where Ilham works and has been a long-time resident, preventing even a remote chance of a fair trial. 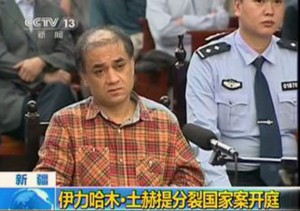 The prosecution’s case against Ilham centered on the website Uyghur Online (www.uighurbiz.net), which he co-founded in 2006. Created to promote better understanding between Uyghurs and Han Chinese, the website was blocked in China. In 2010, the website’s former editor, Mr. Hailaite Niyazi (海莱特.尼亚), was sentenced to 15 years in prison on a concocted charge of “leaking state secrets.” The government permanently shut down the site after Ilham Tohti was taken into police custody in January. At last week’s trial, Ilham maintained that he has never advocated for breaking up the Chinese state in his postings and comments on the site, and that he has never organized his students who helped maintain the site to form a so-called “criminal separatist group.”

On January 15, 2014, Urumqi and Beijing police raided Ilham’s residence in Beijing. Without producing a warrant, police officers searched his residence over the course of two days and confiscated laptop computers, cell phones, documents, and manuscripts. Ilham was then taken to Xinjiang and held incommunicado for one month. His family and lawyers only learned that he was being held at the Xinjiang Autonomous Region Public Security Bureau Detention Center after his arrest on February 20.

Ilham Tohti first met with his own lawyers on June 26 after being denied access to legal counsel for more than six months. The law firm that employs Wang Yu (王宇), one of the lawyers who his family initially engaged, pressured her into dropping the case by refusing to sign documents giving her permission to represent him. Only at that first meeting was Ilham Tohti able to tell of his mistreatment in the detention facility. Authorities denied him halal food, provided him just one-and-a-half cups of water over a 10-day period, and kept his legs shackled for 20 days. They also gave him inadequate access to medical treatment for several health conditions, including heart disease, pharyngitis (an inflammation of the pharynx), and prostatitis (infection of the prostate). Authorities shackled Ilham Tohti again for one month, starting on August 9, after alleging he had coughed to disturb fellow inmates.

Ilham and his defense lawyers, Mr. Liu Xiaoyuan (刘晓原) and Mr. Li Fangping (李方平), had requested—and repeated during the trial—that Xinjiang authorities give up their claim to jurisdiction over the case and send it back to Beijing, unless Xinjiang authorities could guarantee no extrajudicial interferences and respect Ilham’s right to a fair trial. But the request was rejected based on the claim that the case touched on “Xinjiang issues.” The lawyers pointed out that it is unusual for Xinjiang authorities to claim jurisdiction because Ilham holds a household registration (or hukou) in the city of Beijing, his work unit is in Beijing, and his website is registered in Beijing.

At his post-trial meeting on September 19, lawyers saw that Ilham was wearing leg shackles and protested to the guards. They replied that he was shackled since he was accused of an offense that belongs to the cluster of “endangering state security” crimes in the Criminal Law.

“Ilham Tohti must be released immediately, and the verdict must be thrown out,” said Xia. “The court has no evidence to support the ‘splitism’ charge, and the trial was unfair given the serious breaches of his due process rights.”