“Silencing the Messenger: 2014 Annual Report on the Situation of Human Rights Defenders in China”

March 15, 2015       Comments Off on “Silencing the Messenger: 2014 Annual Report on the Situation of Human Rights Defenders in China” 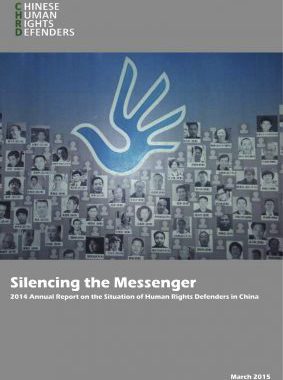 (Network of Chinese Human Rights Defenders – March 16, 2015) – Human rights defenders in China experienced unusually severe reprisal in 2014, says CHRD in its annual report, Silencing the Messenger: 2014 Annual Report on the Situation of Human Rights Defenders in China. CHRD asserts that the government’s persecution of human rights defenders in 2014 was as severe as it has been since the mid-1990s. The government has launched relentless and aggressive assaults on fundamental liberties to tighten its stranglehold on the rapidly shrinking space for civil society, targeting HRDs, the messengers of human rights.

“The second year under Xi Jinping’s rule was even more draconian than the first,” said Renee Xia, CHRD international director. “We see the unfolding and taking hold of Xi’s strongman policies toward any dissent, especially organized dissent.”

2014 saw the intensification of Xi’s campaign to purge universal values, including democracy and human rights. As Xi promised to “rule the country with law,” the government under his leadership blatantly disregarded the law and manipulated the legal system to obstruct peaceful exercise of basic liberties. Those who are un-deterred and went on challenging the increasingly repressive system were punished harshly, including through the use of torture, arbitrary detention, enforced disappearance, intimidation, and other forms of mistreatment.

Based on data  tracked over the years, CHRD finds that there were nearly as many confirmed cases of arbitrary detention of HRDs in 2014 (955) as in the previous two years combined (1,160). During two “politically sensitive” periods in 2014, around the 25th anniversary of June Fourth and as pro-democracy protests took place in Hong Kong in the fall, police detained more than 200 rights defenders over two successive crackdowns. More human rights lawyers were criminally detained or prosecuted in 2014 than in any single year since the early 2000s. The due process rights of detained HRDs were systematically violated, as seen in many cases involving unreasonably prolonged pre-trial detentions, restricted access to lawyers, and deprivation of medical treatment. 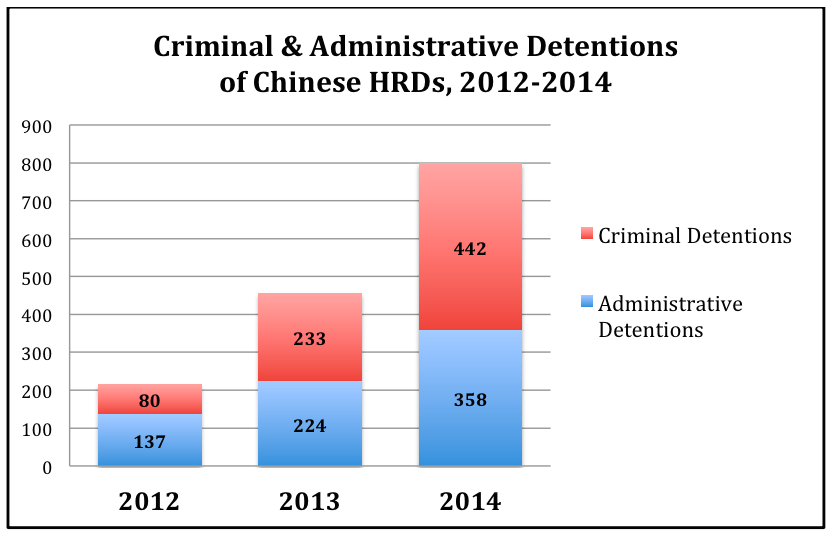 The alarming rise in criminal and administrative detentions of Chinese HRDs from 2012 to 2014—and particularly since President Xi Jinping came to power in March 2013—is a strong indication of escalating suppression.

2014 was a reminder of the stark reality facing HRDs in China. One of the most telling moments of the year was China’s attempt to obstruct NGOs asking the UN Human Rights Council to inquire about the government’s deadly reprisal against activist Cao Shunli (曹顺利), who died in police custody as authorities punished her staunch efforts to hold the state accountable to its international obligations to protect its citizens’ human rights. To honor Cao’s memory and commemorate her life’s work, human rights groups inside China announced the first awarding of the Cao Shunli Memorial Award for Human Rights Defenders on March 14, 2015—on the one-year anniversary of her death.

In this report, CHRD presents data that supports the now widely shared consensus among international human rights monitors of heightened persecution of HRDs in 2014. In addition, the report identifies several noteworthy developments:

“In releasing this report, we urge the UN Human Rights Council, which is meeting in Geneva this month, to investigate the Chinese government’s systematic and gross violations of human rights under Xi Jinping’s leadership,” says Victor Clemens, research coordinator at CHRD.

CHRD urges the Chinese government to release all HRDs deprived of liberty for exercising their fundamental rights; protect citizens’ rights to freedom of expression, assembly, and association; ensure legal protections for human rights lawyers and detainees; end impunity for officials who torture or mistreat HRDs in detention; ensure that civil society members can participate in UN human rights activities free of harassment and reprisals; end suppression and discriminatory policies against ethnic minorities; and ensure that all Chinese citizens can exercise freedom of religion.