December 10, 2015       Comments Off on Free Pu Zhiqiang: Staunch Defender of Free Speech in China Faces Trial for 7 Posts on Weibo 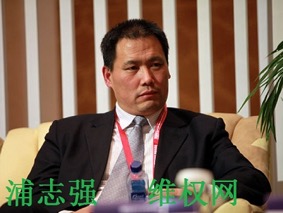 (Chinese Human Rights Defenders, December 10, 2015) – CHRD calls for the immediate and unconditional release of Chinese human rights lawyer Pu Zhiqiang (浦志强), whose trial will begin on December 14, 2015, according to Pu’s lawyers. We urge the Chinese government to release Pu on the basis of the mishandlings of the case by police, the cruel and degrading mistreatment that Pu has been subjected to, and the fact that authorities are persecuting Pu, well-known in China as a staunch defender of free speech, for his role as a crusading lawyer defending civil liberties and seeking accountability for arbitrary detention.

The Beijing Municipal No. 2 Intermediate People’s Court held a pre-trial hearing on Pu’s case on December 8. Pu, who has been detained for over 19 months without a trial, is accused of “picking quarrels and instigating troubles” and “inciting ethnic hatred,” trumped-up charges that could send Pu to prison for up eight years if he is convicted, according to his lawyers. As disclosed at the hearing, the charges against the 50-year-old Pu are now based on seven weibo postings that Pu allegedly sent, though the original indictment against him referred to more than 30 posts. Pu stated in the pre-trial meeting that he was innocent of any criminal charges.

(1.) The court must consider the entirety of Pu’s weibo messages to determine the merits of any criminal charges, rather than exclusively zeroing in on 7 posts. His account includes more than 20,000 posts, the vast majority of which were quickly blocked or deleted by cyber censors.

(2.) All individuals that the prosecution has alleged to have been harmed by the weibo comments must come forth to testify in court. The lawyers raised doubts whether any of the “harmed individuals” have ever viewed Pu’s weibo posts. Given the strict government censorship, Pu’s posts were all very short-lived online. Friends and family of Pu’s have questioned the authorship of these posts. They observed that the posts lack his signature style, which combines humor and wordplay aimed to make sharp social and political critiques while attempting to avoid police censorship. At the hearing, Pu himself raised doubts about some of the posts while acknowledged writing some of them (click here to see the several weibo posts in question). The content of these messages are exercises in free expression and should not form the basis for criminal prosecution.

(3.) It is not necessary to be detaining Pu, according to Chinese law. Pu, who is in poor health, is eligible for medical bail, but family and lawyers’ requests for bail have been repeatedly denied. Authorities have also stated that he would “pose a danger to society” if released, but he has not been charged with any violent crime, and the claim that he might temper with evidence by “colluding” with any other co-defendant is completely baseless.

Human rights lawyer Pu Zhiqiang (浦志强) will stand trial in a Beijing court on December 14, 2015, on charges going after his exercise of free speech.

The case against Pu has been rife with illegality, abuses of his due process rights, and violations of his basic human rights. Authorities have deprived his liberty for attending a peaceful meeting at a private home to mark the anniversary of Tiananmen Massacre, held him in excessively and unreasonably prolonged pre-trial detention, concocted groundless charges for online expression, rejected applications for medical bail, and obstructed visits by his lawyers.

Pu Zhiqiang was initially taken into custody on May 6, 2014, after attending a private event memorializing victims of June Fourth, and formally arrested 37 days later on suspicion of “picking quarrels & instigating troubles” and “illegally obtaining citizen information.” On November 13, 2014, police recommended that Pu be prosecuted on two more charges—“inciting ethnic hatred” and “inciting separatism”—apparently citing his criticisms of government policies, particularly in the Xinjiang Uyghur Autonomous Region, that he allegedly expressed via weibo. The prosecution took seven months to process the case—the longest allowed by law—and indicted Pu on May 15, 2015, but reducing the number of crimes to two: “inciting ethnic hatred” and “picking quarrels and instigating troubles.” Since his indictment, the Beijing Municipal No. 2 People’s Court twice received approval from a higher court for three-month extensions of the periods for reviewing Pu’s case—the maximum allowed by China’s Criminal Procedure Law.

“Picking quarrels and instigating troubles” (Criminal Law, Article 293 (4)) criminalizes behavior that allegedly makes “trouble” or “causes serious disorder” in a public place. Since the Supreme People’s Court issued an interpretation in 2013 that expanded the definition of a “public place” to include cyberspace, police have been punishing Internet speech under this crime. If convicted, Pu Zhiqiang will become this anti-free speech ordinance’s newest victim.

Pu has been held at Beijing No. 1 Detention Center, where police reportedly subjected him to grueling 10-hour interrogations in the initial months of his detention. His wife wrote him many letters but he never received any of them, as they were likely confiscated by police. His health has steadily declined due to inadequate or denied treatment for diabetes, high blood pressure, high cholesterol, and prostatitis. Officials confiscated his medication when he arrived at the detention facility, and he was later offered pills that he did not recognize. One of his lawyers, Zhang Sizhi (张思之), visited him on June 9, 2014, and Pu said he was given some treatment for diabetes, including insulin, but his legs were swollen, a sign of improper treatment. Zhang visited Pu again in July 2014 and reported that Pu’s health conditions have led to a general swollenness. Pu was taken to a hospital on August 15, 2015, due to shortness of breath and was given traditional Chinese medicine before being released. Lawyer Shang Baojun (尚宝军) visited him two days later and reported that his health was not good; Pu’s prostatitis had worsened, he was unable to sleep, and he had high blood sugar.

At the time he was taken into custody, Pu was a partner at the Huayi Law Firm in Beijing. After taking part as a student leader in the 1989 pro-democracy demonstrations, Pu was subjected to administrative discipline by his university. He has been continually harassed, including with brief detentions, as he kept a vow to return to Tiananmen Square each year to mourn the victims. Other than defending free speech, Pu has taken on a broad swathe of human rights cases while publicly expressing his opinions on politically sensitive issues, which has often drawn the ire of Chinese authorities. Following the 2013 abolishment of Re-education Through Labor—Pu won landmark cases for detainees in the extrajudicial labor camps—he turned to taking on cases related to shuanggui, an extralegal disciplinary process for Chinese Communist Party officials. Pu was one of the first signatories of “Charter 08,” a manifesto for political and legal reforms for advancing democracy and human rights in China.[1]