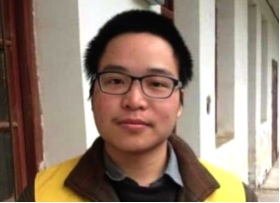 Guangdong activist Huang Wenxun (黄文勋) is said to have been secretly tried and sentenced to four years in prison for “inciting subversion of state power” in Hubei Province, according to CHRD sources. A lawyer reviewing the court files of his client in another case in Jiangxi Province happened to see a reference to Huang’s sentence. However, a lawyer who asked a Chibi court to confirm the verdict was told that no trial has been held. Huang, 24, was originally seized in late May 2013 in Chibi City for “unlawful assembly” during the nationwide crackdown on freedom of assembly, association, and expression while on an advocacy tour of the country with fellow activists. According to Huang’s lawyers, the charge against Huang was subsequently changed to “inciting subversion.” Six months into Huang’s detention, authorities still had not allowed his lawyers to visit him, causing the lawyers to fear back in November that Huang might be tried in secret. 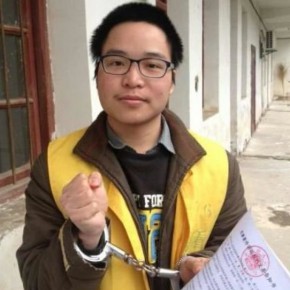 Guangdong activist Huang Wenxun (黄文勋) is said to have been secretly tried and sentenced to four years in prison for “inciting subversion of state power.”

The reports about Huang’s trial and sentence raises the question of whether two others seized during the advocacy tour with Huang, Yuan Fengchu (袁奉初 aka Yuan Bing 袁兵)and Yuan Xiaohua (袁小华), have also been tried in secret. All three were criminally detained on June 8, 2013, and arrested five weeks later on suspicion of “inciting subversion.” In September, a prosecutor told Yuan Fengchu that his crime had been changed to “gathering a crowd to disrupt public order,” and a local procuratorate sent his case back to police for further investigation in October. CHRD previously reported a pre-trial meeting held at Chibi City People’s Court on March 13, 2014 (see report). The three activists have been held at Jiayu County Detention Center in Chibi, where Huang was reportedly beaten by inmates. Yuan Fengchu’s lawyer reported after visiting him last October that Yuan’s skull was cracked from being beaten by inmates, requiring him to get stitches.[1]

Tibetan Monk Disappeared After Being Seized in Restive Tibetan County

Senior Tibetan monk and scholar Tenzin Lhunrup (丹增龙珠) reportedly disappeared in May 2014 after being seized by police. The monk went missing after giving a lecture at the Gom Gonsar Monastery in Diru (CH: Biru) County in the Tibet Autonomous Region. A number of anti-government protests took place in Diru last year (see report). According to the Tibetan Centre for Human Rights and Democracy, police had been monitoring Tenzin after he led a local campaign in 2013 opposing mining by a Chinese company at Naglha Dzamba Mountain, which Tibetans consider sacred. His disappearance is but another instance of authorities clamping down in restive Diru County, where imposed tighter restrictions on Tibetans this June.[2]

Family members and lawyers of detained Beijing lawyer Pu Zhiqiang (浦志强) and Guangdong activist Yuan Xinting (袁新亭) are alarmed at their worsening health, according to Rights Defense Network. New information concerning the detainees’ conditions adds to concerns that authorities are punishing them by rejecting requests for medical bail and depriving them of proper medical treatment. Both Pu and Yuan were seized in May and arrested in June as a part of the suppression surrounding the 25th anniversary of the Tiananmen Massacre (see CHRD’s ongoing updates).

Pu’s lawyer Zhang Sizhi (张思之) disclosed that Pu, who suffers from diabetes, also has a previously unreported condition, prostatitis, an infection of the prostate that, if left untreated, can spread to other parts of the body, including the kidneys, and possibly lead to organ failure. Lawyer Zhang reported that Pu’s conditions have led to a general swollenness. Zhang said that he applied for Pu’s release on bail for medical reasons for a third time, but the application was again rejected (see CHRD’s previous statement on Pu’s arrest and health conditions as well as CHRD’s watch list of detainees in need of medical attention). Pu is being held in Beijing No. 1 Detention Center on charges of “creating a disturbance” and “illegally obtaining personal information.”

According to sources close to the family, Yuan Xinting suffers from severe high blood pressure and needs to take daily medication. Yuan has been given some medicine but the conditions inside the detention facility are very poor and his health has worsened. In addition, he suffers from a kind of internal hemorrhoids, which have flared up again in detention and may not be getting adequate treatment. He is reportedly excretingblood in his stool on a daily basis. Yuan is being held at Guangzhou No. 1 Detention Center on suspicion of “inciting subversion of state power.”[3]

The UN Working Group on Arbitrary Detention has declared that the detention of petitioner Xing Shiku (邢世库) in a psychiatric hospital is “arbitrary,” and called for his release as well as compensation for his mistreatment. In an opinion released on May 20, 2014, the UN body rejected the Chinese government’s argument that Xing, who has been forcibly detained in a psychiatric hospital in Heilongjiang Province for more than seven years, suffers from schizophrenia and was “unable to ensure civil behavior” if released. The working group has also referred the cases of Xing and his wife Zhao Guirong (赵桂荣), who has been locked up in black jails for petitioning for Xing’s freedom, to the Special Rapporteur on Torture for investigation. In February 2007, police seized Xing while he was petitioning in Beijing and returned him to Harbin City, where he has been committed to a psychiatric hospital ever since. In 2013, CHRD sent communications to UN human rights experts on Xing’s case and then replied to Chinese government’s claims about Xing. The issue of involuntary psychiatric commitment was examined in a CHRD report: The Darkest Corners.