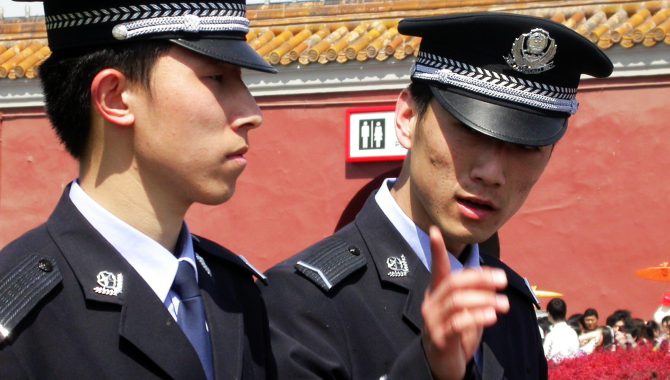 (Network of Chinese Human Rights Defenders – April 28, 2016) – CHRD denounces the Chinese government’s adoption of a draconian law on overseas NGOs that will have a profoundly detrimental impact on civil society in China. The law passed China’s rubber-stamp legislature on Thursday despite critical international responses to the most recent draft that dates back to last spring. The adopted version appears to retain the most troubling elements of the previous draft, and allows for even tighter government control over NGO activities. Once the law takes effect on January 1, 2017, it will further restrict international NGOs working in China and suffocate the country’s already beleaguered independent organizations.

As written, the law has kept perhaps the most worrisome provision, which hands the Ministry of Public Security (MPS) full authority over the registration and supervision of foreign-based NGOs operating inside China. This is a clear indication the government views such groups as a threat to national security. The law has also retained the strict funding restrictions that appeared in the previous draft. As such, the legislation will deliver a heavy blow to mainland NGOs, which rely heavily on overseas NGOs’ financial support due to insurmountable obstacles to securing funding inside China. CHRD calls for the repeal of the overseas NGO management law or, at minimum, significant revisions of its stipulations that violate independent groups’ right to freedom of association.

The National People’s Congress Standing Committee adopted the legislation on April 28 following its third reading during its bi-monthly session, according to the state media agency Xinhua. The law’s official name has been changed to the Overseas NGOs’ Domestic Activities Management Law (境外非政府组织境内活动管理法). At the time of writing, the text of the law had not been made public, but the limited state media reporting on the third draft, which appeared prior to the vote, seemingly confirms that the government has not relented on the most troubling aspects in the widely circulated second draft. That draft (Chinese // unofficial English translation) alarmed the international community, and sparked significant concerns due to its focus on national security and its overly broad scope.

Among the changes in the legislation, as reported by Xinhua prior to today’s vote, the four below are the most alarming, as they authorize even greater power to police (compared to the prior draft) to exercise “daily supervision and monitoring” of overseas NGOs:

While the third draft appears to grant a few concessions that are said to “facilitate” services and “simplify” procedures for foreign NGOs, such changes are mostly minor, and they also lack specific parameters, which was a major issue with the previous draft. The table below summarizes some concessions that Xinhua reported were made in the 3rd draft that was passed into law on April 28, 2016 (see more details after table). 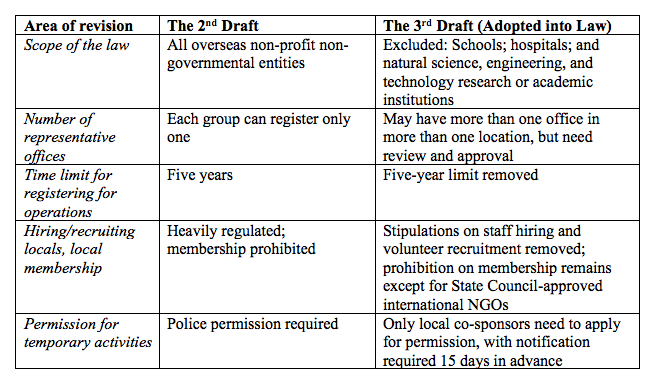 With the passage of the Overseas NGOs’ Domestic Activities Management Law, CHRD issues the following recommendations: