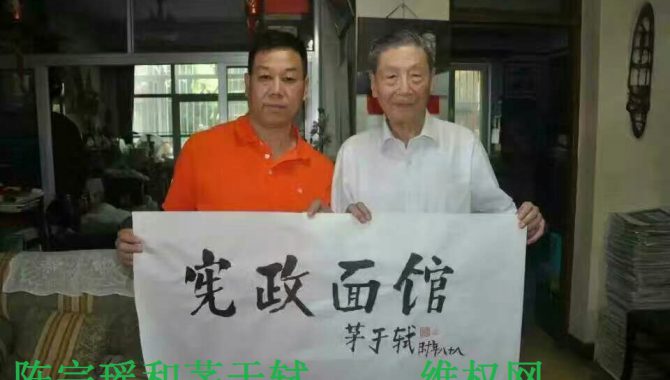 Jiangsu activist Shan Lihua (单利华) was sentenced to 27 months in prison in retaliation for her human rights advocacy on September 29, when the Gangzha District People’s Court convicted her of “picking quarrels and provoking trouble.” After the verdict was announced, bailiffs dragged Ms. Shan from the courtroom even before she could state whether she intended to appeal the decision. Earlier in the hearing, bailiffs removed Shan’s brother, Shan Ronghua (单荣华), from the courtroom and also beat him, when he tried to speak to her. He was detained on suspicion of “disturbing court order.”

The court had suspended Shan Lihua’s trial in early June, after she collapsed during proceedings due to untreated asthma, and the trial resumed on June 28. Police kept the public, including her supporters, from attending the proceedings. In its verdict, the court cited “evidence” from Shan’s advocacy activities from between June 2013 and March 2014, including her posting of comments online on official corruption and police brutality, and publicly demonstrating for women and children’s rights. Criminally detained in November 2015, Shan, 46, has been held at Nantong City Detention Center.

A Shandong procuratorate indicted four activists who were detained in June 2015, after their protest outside the Weifang City People’s Court during the trial of Xu Yonghe (徐永和), a civil servant whose supporters feel was unjustly accused of “corruption” as retaliation by government officials. The four detainees—Ms. Li Yanjun (李燕军), Mr. Liu Xing (刘星), Ms. Yao Jianqing (姚建清), and Ms. Zhang Weihong (张卫红, aka Zhang Wanhe, 张皖荷)—face charges of “gathering a crowd to disrupt order of a public place” and “picking quarrels and provoking trouble.” Even though the accusations are based on the same incident, each detainee has been indicted separately. Their lawyers believe that this is a tactic by authorities to drain the resources of the defense team. The Guangrao County People’s Court in Shandong will put the individuals on trial. They are being held at Weifang City Detention Center. Their lawyers first learned about the indictments in August 2016.

Activist Wang Fang (王芳), detained during the “709 crackdown,” has refused to confess under coercion to any criminal wrongdoing. In a meeting with Wang on September 29, lawyer Liu Zhengqing (刘正清) learned that an official from the Wuchang District People’s Court had tried to pressure her into confessing on September 22, but that Wang had refused. According to Wang’s family, the official said that he wanted to have Wang’s daughter visit her at Wuhan No. 1 Detention Center, likely to use the daughter to persuade her to sign a confession.

Authorities initially scheduled Wang’s trial for August 18, 2016, but postponed it. According to lawyer Liu, her trial may have been pushed back after diplomats from the U.S. and some European countries requested to attend. Police in Wuhan took Wang Fang into custody on July 28, 2015, three days after she and other activists had shown support for activist Wu Gan (吴淦),

who was detained in May 2015 and later accused of playing a role in “criminal activities” of the Beijing Fengrui Law Firm, a main police target in the “709 crackdown.” On September 13, Hubei authorities put on trial activist Yin Xu’an (尹旭安), also detained following the incident in Wuhan, but have not issued a verdict in Yin’s case.

Democracy activist Wang Yiming (王一鸣) has reportedly been tortured at Hongshan Prison in Wuhan, disclosing details to his lawyer Liu Zhengqing (刘正清) during a visit on September 5. That day, Liu was accompanied by Wang’s brother. Before the visit, a prison official had told the men that Wang had gotten into an altercation with a prison guard, who the official claimed Wang had provoked. Wang, who had a long scar near his left eye, said during the visit that he was forbidden to leave his cell to get food or drinking water, and that a guard had to bring him everything instead. Wang maintained that his solitary confinement is retaliation for his filing a complaint about getting diarrhea from the poor quality of food in the prison. Wang also told his lawyer and brother that the prison has not provided him medical treatment even though he has pains all over his body and impaired hearing due to frequent beatings by a guard. Wang was transferred to Hongshan Prison in March 2016.

Officials have since denied the lawyer’s requests to see Wang—on both September 29 and 30—only increasing concerns about Wang’s mistreatment. Wang, whose real name is Wang Yuping (王喻平), is serving a 11-year punishment for “inciting subversion of state power.” He was sentenced in January 2015. Wang was initially taken into custody in Thailand on November 8, 2012. After bringing him back to China, police disappeared him for a total of 26 months, holding him in two detention centers in Hubei without notifying his family or allowing Wang to see a lawyer.

Six activists in Jiangsu have been disappeared since police took them into custody on September 8. They were seized by Suzhou police following a demonstration to draw attention to police mishandling of the case of Fan Mugen (范木根), who was imprisoned for eight years in May 2015 for killing two crew members of a demolition team that destroyed his home. The six detainees, who are under “residential surveillance” in police-designated locations, were seized after reportedly holding a banner calling for justice outside the Suzhou City Intermediate People’s Court, where Fan had been sentenced. According to police notices provided to families, one of the activists, Gu Yimin (顾义民), is being held on suspicion of “inciting subversion of state power.” Four others, all from the same family, are being held for “disrupting court order”—Ms. Wang Wanping (王婉平), Mr. Wu Qihe (吴其和), Ms. Xu Chunling (徐春玲), and Ms. Zhu Xueying (朱雪英). The accusation against the sixth detainee, Mr. Wang Minghe (王明贤), is currently unknown. Three others seized in connection to the demonstration, including Fan Yonghai (范永海), the son of Fan Mugen, were later released.

Police at the Suzhou City Public Security Bureau rejected a request for lawyer Chen Jinxue (陈进学) and Gu Yimin’s wife to see Gu on September 28. Gu has recently served an 18-month prison sentence—also for “inciting subversion”—after participating in an anti-corruption campaign in 2013 as part of the “New Citizens’ Movement.” He was released in November 2014. 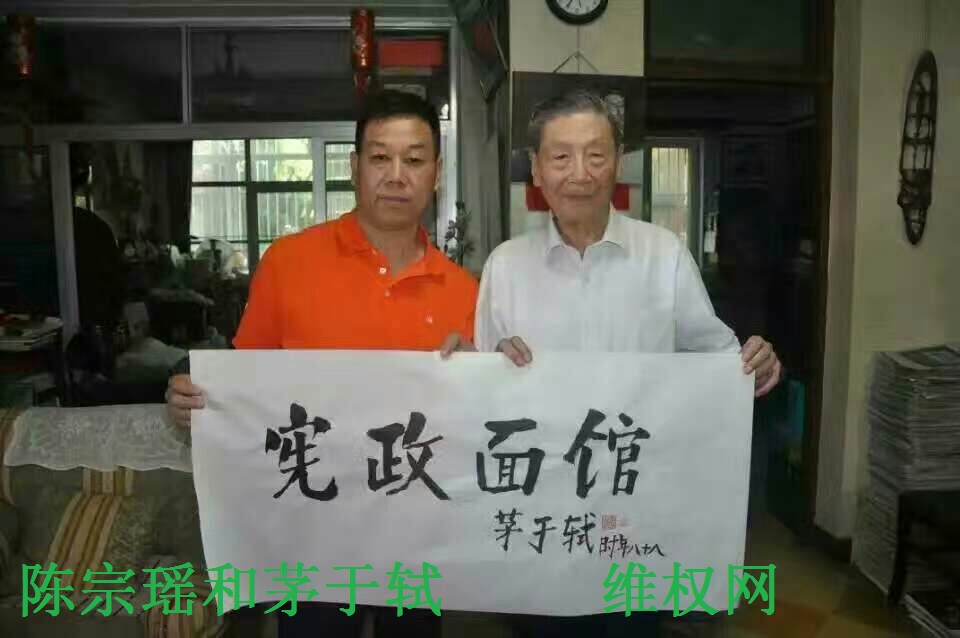 Police arrested a father and son, Chen Zongyao and Chen Zhixiao, for “obstructing official duties” in Zhejiang, after they had put up a sign saying “Constitutional Noodle Shop” on their restaurant before the G20 Summit.

On September 26, police in Zhejiang formally arrested Chen Zongyao (陈宗瑶,aka Chen Chen, 陈晨), and his son, Chen Zhixiao (陈志晓), who had been held on suspicion of “obstructing official duties” in Yueqing City since August 20, two weeks before the G20 Summit took place in neighboring Hangzhou. They reportedly had put up a sign saying “Constitutional Noodle Shop” (宪政面馆) on their restaurant in Yueqing. The senior Chen is known to have taken part in politically sensitive activities in recent years, attracting the attention of local authorities. Urban management officers (chengguan) had ordered the men to take down the same sign last year. In the run-up to the G20 Summit, held in Hangzhou in early September, CHRD documented that police in Zhejiang and other nearby areas disappeared or detained dozens of activists and petitioners under a pretext of “maintaining stability.”

Eleven rights defenders remain in custody after losing contact with their families and then being criminally detained in Fujian Province between August 30 and September 13 on suspicion of “picking quarrels and provoking trouble.” The detentions appear to be tied to police operations around the G20 Summit, and are reportedly due to the individuals’ longtime advocacy activities, such as fighting forced evictions and demolitions, calling for the release of detained rights activists and lawyers, and commemorating June Fourth. Police raided the homes of several of the detainees, who are from the cities of Fuzhou and Fuqing, and confiscated computer equipment, petitioning materials, banners, and other items.