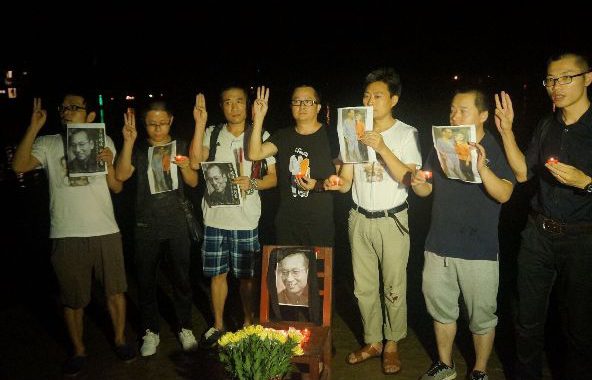 Chinese police have detained, questioned, and searched the homes of citizens who commemorated Liu Xiaobo (刘晓波) after he passed away on July 13. Authorities have clamped down on public expressions, in gatherings or online, of mourning for Liu. Prior to Liu Xiaobo’s death, police had detained and intimidated supporters who traveled to the hospital in Shenyang where he had been admitted.  Since then, police moved quickly to stifle any expressions of support for the dissident writer and Nobel Peace Prize laureate. Liu’s death in custody after the Xi Jinping regime refused to grant his wish to leave the country for treatment has led to an outpouring of grief and outrage around the world.

Below are summaries of the detentions we have documented over the past two weeks:

Two others who attended the seaside memorial had their homes searched on June 22 by Guangzhou police: writer Li Xuewen (黎学文) and activist Zhuo Yuzhen (卓玉桢), who likely evaded detention because they were not home when police came. Li Zhaoqiang (李肇强), a driver for the Hong Kong station who had reportedly driven the reporters to the memorial service, was seized by police in Guangzhou on July 26 but released three days later.

In Sichuan, activist Li Yu (李宇), an early signatory to Charter 08, has been detained since July 19. Li was taken into custody by national security officers in the Fujian city of Fuzhou. Before being seized, Li had posted photos online of himself at a Fuzhou seaside, with the captions alluding to mourning Liu Xiaobo: “At seaside, with him.” Li Yu is being held in Fuqing City. Police have also reportedly questioned several netizens who had been in contact with Li.

In Liaoning, activist Jiang Jianjun (姜建军) was put under a 10-day administrative detention after honoring Liu at a seaside in Dalian on July 17. Jiang was taken away by police two days later. On July 20, his wife was told that he had been given the detention punishment. He was released on July 29.

The suppression of grieving supporters of Liu Xiaobo has occurred as voices from both the international community and Chinese society have called for the government to lift its restrictions on the freedom of communication and movement of Liu Xia (刘霞), the dissident’s widow. Her whereabouts are currently unknown and she is believed to be under tight police control.

Liu Xia was last seen on state media on July 15, when she took part in what appeared to be a heavily scripted funeral service for her husband and then on a boat, when Liu Xiaobo’s ashes were scattered at sea. Concerns are mounting about Liu Xia’s physical and psychological health, which have worsened during her house arrest dating back to 2010.

In 2014, Liu Xia had symptoms of heart disease—reportedly diagnosed by doctors as a heart attack—and a throat inflammation. Her conditions were serious enough that police escorted her to a Beijing hospital in February 2014. The hospital stopped tests after just one day and sent her home, according to lawyer Mo Shaoping. Liu Xia was hospitalized for the second time that month to undergo tests and treatment for a heart condition. Liu Xia has mentioned to her lawyer severe depression brought on by isolation and restrictions, but she did not want to see a psychologist, fearing that authorities may send her to a psychiatric hospital against her will. Police have warned her family not to speak publicly about her health. Prior to Liu Xiaobo’s death, authorities refused to allow the couple to travel overseas for medical treatment.

In May 2011, the UN Working Group on Arbitrary Detention (WGAD) found the house arrest of Liu Xia to be arbitrary and called on China to remove the restrictions on her movement and communications. However, Chinese authorities have continued to refuse to set her free.

The UN Special Procedures and the High Commissioner for Human Rights, the European Union and governments concerned about human rights should press the Chinese government to lift its restrictions on Liu Xia, ending her virtual disappearance imposed by the government, and respecting her wish to travel abroad for medical treatment.