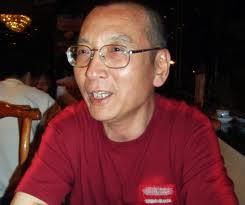 “…I still want to tell the regime that deprives me of my freedom, I stand by the belief I expressed twenty years ago in my “June Second Hunger Strike Declaration” — I have no enemies, and no hatred…

…For hatred is corrosive of a person’s wisdom and conscience; the mentality of enmity can poison a nation’s spirit, instigate brutal life and death struggles, destroy a society’s tolerance and humanity, and block a nation’s progress to freedom and democracy. I hope therefore to be able to transcend my personal vicissitudes in understanding the development of the state and changes in society, to counter the hostility of the regime with the best of intentions, and defuse hate with love.”

Liu Xiaobo, the Beijing-based writer, intellectual, dissident, human rights activist, and 2010 Nobel Peace Prize recipient, was issued medical parole and transferred to a hospital in June 2017, after serving over eight-and-a-half years of an 11-year sentence. He died at age 61 in Number One Hospital of China Medical University in Shenyang, Liaoning Province, on July 13, of “multiple organ failure,” according to an announcement posted on the website of the Shenyang City Justice Bureau. During his time in the hospital, Liu was kept under close guard, and Chinese authorities tightly controlled information on his treatment, rejected requests by friends and supporters to visit him, and refused to allow Liu to choose his own doctors or place of treatment, in violation of his human rights.

Liu Xiaobo had been taken into custody on December 8, 2008, a day before the issuance of “Charter 08,” a public appeal calling for bold reforms and promoting democracy and human rights in China. Taken from his home by a dozen policemen, Liu was detained on suspicion of “inciting subversion of state power” for co-authoring and signing the petition as well as organizing others to sign it. Authorities alleged that Liu had “incited the overthrow of the socialist system” through “spreading rumors and slander,” among other methods.

On December 10, 2009, Liu was indicted on charges of “inciting subversion.” At his trial later that month, his wife, the poet and activist Liu Xia (刘霞) was not permitted to observe the hearing, although his brother-in-law was present. Diplomats from more than a dozen countries, including the United States, Great Britain, Canada, Sweden, Australia, and New Zealand, were denied access to the court to watch the proceedings. Liu was sentenced on December 25, 2009; it has been widely perceived that the Chinese government timed the trial and sentencing hearing to coincide with the holiday season in the hope that western media and governments would be paying less attention. Liu had prepared a “final statement” to read at his sentencing, but the presiding judge did not allow him to speak in court. The statement would eventually be read at the Nobel Peace Prize Ceremony in Oslo on December 10, 2010, which the Chinese government blocked Liu from attending.

In announcing Liu’s medical parole in June 2017, the Liaoning Province Prison Administration Bureau indicated that Liu was suffering from liver cancer, but did not state when the parole decision had been issued. The Bureau stated that Liu had been moved to the Number One Hospital of China Medical University in Shenyang City in Liaoning, and claimed that a “nationally recognized team of eight specialists was implementing a treatment plan.” One of Liu’s lawyers, Mo Shaoping, reported that Liu was already in the late stages of cancer by the time he was transferred to the hospital. Another of Liu’s lawyers, Shang Baojun, said that Liu had been diagnosed with the disease on May 23, 2017.

After Liu entered the hospital, Chinese authorities severely restricted his contact with the outside world, refused to allow him to go abroad for treatment, and controlled the flow of information about his condition. On July 6, 2017, as reports continued to emerge about Liu’s dire health, over 40 friends of Liu’s signed an open letter appealing for the opportunity to see him. After widespread calls for the government to allow a physician of his or his family’s own choosing to examine Liu, authorities eventually allowed two physicians, a German and an American, to visit him at the hospital. After examining Liu, who had previously expressed a desire to go to either Germany or the US for treatment, the foreign doctors said that Liu was healthy enough to be transported overseas. This contradicted statements made by Chinese officials, who had claimed Liu’s condition, which the hospital reported on July 10, was too fragile for him to be moved. Soon after the doctors’ visit, a video was leaked online showing the doctors discussing Liu’s health at his hospital bedside, and in the presence Liu Xia and hospital staff. In a statement, the German Embassy in Beijing criticized the leak as a violation of doctor-patient confidentiality, asserting that “certain authorities have evidently made audio and video surveillance recordings” of the weekend visit “against the expressed wishes of the German side.”

As Liu remained in the hospital in Shenyang, foreign diplomats based in Beijing, as well as governments abroad, expressed increasing urgent, but ultimately futile, calls to have Liu sent abroad while he could still be moved safely. It was suspected that Chinese authorities were stalling any possible move until Liu was genuinely too ill to be transferred. Due to the government’s virtual embargo on information about Liu’s health, reports issued by Chinese authorities on Liu’s worsening condition, including organ and respiratory failure, could not be independently verified, all the way up to his death on July 13, 2017.

On October 8, 2010, the Norwegian Nobel Committee announced that it had awarded Liu Xiaobo the Nobel Peace Prize, “for his long and non-violent struggle for fundamental human rights in China,” with Liu becoming the first Chinese citizen ever to receive the award. Upon release of the news, China’s Foreign Ministry immediately denounced Liu’s award and presented an official complaint to Norway’s ambassador to China. The Chinese government moved to censor information about the announcement inside the country, and authorities detained, harassed, or put under surveillance prominent intellectuals, dissidents, activists, and other citizens. An empty chair was left on the stage at the award ceremony in Oslo on December 10. 2010, as Chinese authorities would not allow Liu or his family members to travel for the event.

Liu Xiaobo’s wife, Liu Xia, was placed under strict house arrest after she went to inform her husband of the Nobel award, and police forbade her from talking to reporters. Liu Xia lived under some form of surveillance and “soft detention” ever since her husband’s arrest in 2009, facing restrictions on her freedom of movement and expression. Before being allowed to leave China on July 10, 2018, she was only been able to go out of her residence in the company of national security officers, and she was been constantly warned not to post online messages or contact “sensitive” individuals.

Liu Xiaobo was detained for 19 months after participating in the pro-democracy demonstrations in Tiananmen Square in 1989. He had returned to China from the United States and initiated a four-man hunger strike on June 2. Having secured the trust of protesting students, Liu proposed that the government and demonstrators engage in dialogue and compromise in order to create a new political culture and find a possible path for reforms. However, when it became apparent the Chinese soldiers would violently move in to clear the square, Liu and others negotiated with student leaders and the army commander to let the students withdraw peacefully, likely helping to avoid countless casualties. On June 5, 1989, Liu was seized and then held in Qincheng Prison for 19 months for his role in the movement, charged with”counter-revolutionary propaganda and incitement.” China’s State media published articles labeling Liu a “mad dog” and “black hand” for allegedly “inciting and manipulating the student movement to overthrow the government and socialism.”In January 1991, Liu Xiaobo was convicted of a criminal offense but exempted from a prison sentence due to his “major meritorious action” for having helped avoid a bloody mass confrontation in Tiananmen Square.

Beginning in the mid-1980s, Liu became active in publishing his literary critiques while undertaking doctoral studies at Beijing Normal University, earning a reputation as a radical, sharp commentator on official Chinese ideas and institutions. He actively wrote about and critiqued issues in modern Chinese society at large as well as the policies and practices of the Chinese government, attracting the ire of the government. After detaining Liu in 1989, authorities banned his publications, which at that time included Criticism of the Choice: Dialogues with Leading Thinker Li Zehou, a book criticizing Confucianism and posing a challenge to philosopher Li Zehou, who was a major influence on young Chinese intellectuals at the time, and the two-volume Mysteries of Thought and Dreams of Mankind. Liu published another book in 1989, The Fog of Metaphysics, in which he critiqued Western philosophies. In 1992, in Taiwan, he published a memoir of his confessions and political criticism related to the 1989 pro-democracy movement, and went on to publish more books. In addition, Liu edited the online journal Democratic China from the mid-1990s, and served as the president of the independent Chinese PEN from 2003 to 2007.

Including with his lengthy imprisonment tied to “Charter 08,” Chinese authorities have retaliated against Liu by incarcerating him in direct response to his exercise of free speech rights. In 1995, he was detained for eight months in Beijing for issuing a public petition. In 1996, he was sent to three years of Re-education through Labor (RTL) for “disrupting public order,” after co-authoring the October Tenth Declaration, which advocated for a a peaceful reunification of Taiwan with the mainland in order to oppose the Chinese Communist Party’s threats against the island. From 1999 until his detention in 2008, Liu was placed under “soft detention” at home.

Born in Changchun City in Jilin Province on December 28, 1955, Liu Xiaobo began studying in the Department of Chinese Literature at Jilin University in 1977, graduating in 1982. He received a master’s in literature in 1984 from Beijing Normal University and began to work there as a lecturer upon graduation. He went on to work as a visiting scholar at universities overseas, including Columbia University, the University of Oslo, and the University of Hawaii, before returning to China to take part in the 1989 demonstrations in Tiananmen Square.

Opinions adopted by the Working Group on Arbitrary Detention at its sixtieth session, 2–6 May 2011 – No. 15/2011 (China) Liu Xiaobo (English version) (Chinese version)