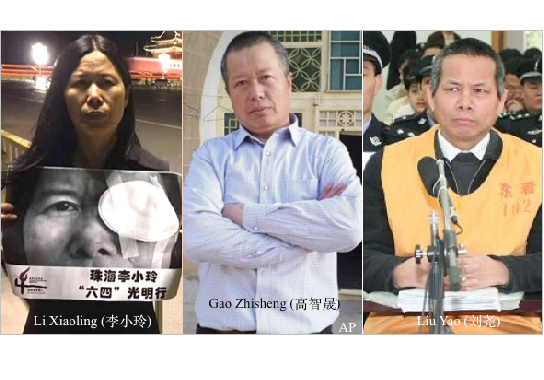 Guangdong human rights activist Li Xiaoling (李小玲) was formally arrested on September 12 on suspicion of “picking quarrels and provoking trouble,” after she commemorated the 28th anniversary of the Tiananmen Massacre earlier this year. Police in Beijing initially took Li into custody in the early morning of June 4, after she had held up a sign in Tiananmen Square the previous evening and then uploaded photos to WeChat. Police held her at the Xicheng District Detention Center until July 5, when they released her on “bail pending further investigation.” Instead of being freed, Beijing authorities handed her over to Zhuhai City police, who forcibly brought her back to Zhuhai and held her in a guesthouse (an illegal detention facility, or “black jail”). On July 19, Li made a harrowing escape from the illegal facility but was caught by police in Beijing on July 27 and again forcibly brought back to Zhuhai. Authorities then gave Li a 10-day administrative detention for violating her “bail” conditions. On August 8, at the end of her punishment, authorities criminally detained Li and transferred her to Zhuhai No. 1 Detention Center.

Her lawyers, Lin Qilei (蔺其磊) and Ge Wenxiu (葛文秀), have been allowed occasional access to Li. However, on other occasions, authorities deliberately obstructed meetings between Li and her lawyers by taking her in for interrogations and sitting in silence. The detention center granted Li two visits to hospitals to examine an eye injury, but refused to let her see a specialist as recommend by doctors. During a past detention, officers denied Li adequate medical treatment, which resulted in serious damage to her left eye. Li Xiaoling, born on July 7, 1962, was a successful businesswoman but became involved in rights defence after her sons died. She often advocated for the rights of others, especially joining campaigns for justice for petitioners and prisoners of conscience.

On August 10, the Heyuan City Intermediate People’s Court upheld the 20-year prison sentence for rights lawyer Liu Yao (刘尧). The original unreasonably long sentence was handed down to Liu by the Heyuan City Yuancheng District Court on April 24, 2017, for “extortion,” “blackmail,” and “purchasing a trafficked child.” All three charges against Liu, as well as his lengthy prison sentence, are believed to be retaliation for his years of exposing corruption by Heyuan officials. Liu had made allegations that he had been tortured and mistreated while held in secret detention, which were not addressed by the court.

Police first took Liu into custody on December 26, 2015, and put him under “residential surveillance at a police-designated location” (RSDL). They initially investigated him for “extortion” and “illegally disseminating state secrets overseas,” and later for the trafficking charge. The third offense stems from a child adoption by Liu and his wife, Lai Wei’e (赖伟娥). Liu’s wife reportedly received a one-year prison sentence on November 22, 2016 in connection to the adoption. According to CHRD’s sources, Lai was released at the end of her sentence and the adopted son has been returned to her care.

Authorities formally arrested Liu on June 24, 2016, dropping the “state secrets” charge but adding a charge of “fraud,” and then moved him to Heyuan Detention Center. During his six-month period of RSDL, Liu was denied all access to his lawyer and his family was unaware of his whereabouts. When Liu eventually met with his lawyer, Li Fangping (李方平), he said that he had been tortured in RSDL, including being held in stress positions and denied fresh air. On September 23, 2016, the Yuancheng District People’s Procuratorate in Heyuan indicted Liu and five other individuals, including his 34-year-old son, Zou Zhaoxing (邹肇星), who was charged with “extortion.” According to the procuratorate, Liu had used a “cloak of anti-corruption” to recruit others to threaten and extort money from officials, companies and others in exchange for not filing complaints. The appellate court repeated the same claim in rejecting Liu’s appeal last month, according to court documents review by CHRD.

Born on February 18, 1962, Liu Yao was disbarred after a 2008 conviction for “intentional destruction of property” over his legal representation of villagers in Heyuan City in a land dispute case. Liu was sentenced to four years in prison, but that punishment was reduced to 18 months, suspended for two years, following a retrial and appeal. After he was released from detention, on April 16, 2009, Liu continued his anti-corruption advocacy activities. 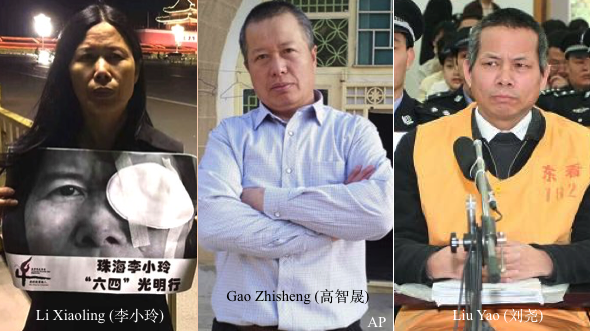 Prominent ex-lawyer Gao Zhisheng (高智晟) is in police custody in Beijing, according to his family members, after disappearing from house arrest in Shaanxi Province on August 13. It is unclear on what date Beijing police detained Gao, or if any formal compulsory criminal measures have been taken against him. His family only learned of his status on September 5. Gao went missing several days after the third anniversary of his August 7, 2014, release from Shaya Prison in Xinjiang, where he had served a three-year sentence. Authorities had held Gao under highly restrictive house arrest after that release. Gao left prison in poor health and with severe dental problems, but police prevented him from seeing a dentist for treatment following his release. An update issued days before he went missing indicated that more of his teeth have decayed and fallen out since leaving prison. Two of his associates, Li Fawang (李发旺) and Shao Zhongguo (邵重国), have been detained in connection to his disappearance, and both are believed to be held at Jia County Detention Center in Yulin City, Shaanxi. Li went missing on September 2, and Shao disappeared on August 28.