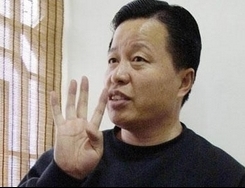 As reported in August 2017, Gao still was under highly restrictive house arrest and living in poor conditions while under constant watch of guards following his release from prison in 2014. He had continued to be blocked from seeking dental treatment, even as more of this teeth had decayed and fallen out.

According to his family, Gao disappeared from his residence in Shaanxi on August 13, 2017, after several activists helped him escape confinement; the activists were detained for aiding Gao. His family reportedly learned on September 5 that police were holding him in Beijing, but they were not given any more detailed information on his whereabouts or “personal status.”

In October 2017, the Chinese government informed the UN Office of the High Commissioner for Human Rights that, contrary to a multitude of reports, Gao had not faced “any coercive measures” after he had served out his prison time in August 2014. The communication further noted that, following Gao’s family disclosure in August that the ex-lawyer was missing, “public security authorities have carried out an inquiry in accordance with the law, and the case is currently still open.”

After Gao was disappeared in August 2017, his family and two lawyers hired by them inquired to public security bodies in Shaanxi and Beijing about Gao’s case. However, none of the officials questioned provided any information about Gao, including what body was handling his case. In November 2017, it was reported that Gao was again in Shaanxi, apparently being held in a darkened room, with the windows covered, and he was not being allowed to go outside.

Gao Zhisheng, a disbarred lawyer and previous law firm director, was “disappeared” on September 22, 2007, while on parole for a past conviction, and taken away by Beijing police officers from the State Security Bureau and the National Security Unit. Days before his disappearance, he had written to the U.S. Congress urging members to focus on China’s human rights before the Olympics. Gao and his wife Geng He (耿和) and two children were held in a “black jail” in the outskirts of Beijing until he was forcibly returned to his home in Xinjiang.

His wife and children fled China in January 2009, claiming asylum in the United States, and Gao was soo after “disappeared” again, on February 4, 2009. His family received no information from authorities until January 2010, when Beijing national security officers told Gao’s brother, Gao Zhiyi (高智义), that Gao had gone “missing” and they did not know where he was. The ex-lawyer then made contact with the outside world in March and April 2010, during which time he gave several interviews—indicating, among other violations, torture that he suffered while in police custody. In one interview with the South China Morning Post published on June 13, 2010, Gao indicated that he had been treated “like an animal” between February 2009 and March 2010, and expressed concerns that he would “disappear” again. Likely under heavy surveillance during this time, Gao disappeared again in late April 2010, immediately after he  visited family members in western China.

No further information emerged publicly about Mr. Gao until December 16, 2011, when the Xinhua News Agency reported that the Beijing No. 1 Intermediate People’s Court, which had issued the original verdict in Gao’s case, was sending Gao to prison for violating terms of his probation. While in prison, Gao was granted sporadic visits from family members. During one visit, in the presence of police, Gao Zhisheng reportedly said that he did not want any further involvement in his legal case, did not wish to file an appeal, and did not need a lawyer to represent him. It is believed that he was under pressure from authorities to make these statements.

Gao was released in August 2014 and placed under house arrest in Shaanxi Province. He was reportedly unable to speak when he left prison, had lost several of his teeth due to malnutrition, and had lost a significant amount of weight.

Before being detained in 2006, Gao Zhisheng had represented defendants who were persecuted for activities tied to the banned sect Falun Gong and unofficial Christian house churches. He had served as the director of the Beijing Shengzhi Law Firm, which had its license suspended by the Beijing Bureau of Judiciary Affairs in November 2005. Born in 1966, Gao was also outspoken in the overseas media about human rights violations in China. Gao was detained on August 15, 2006, and arrested on September 21, 2006, on charges of “inciting subversion of state power” in Chaoyang District in Beijing. His trial took place on December 12, 2006, and he was sentenced 10 days later to three years’ imprisonment, suspended for five years.

Report on Several Issues Raised by the Chinese Government’s Response to the UN Committee Against Torture’s Recommendations for Follow-Up in 2009, August 5, 2010, CHRD

Submission to UN on Gao Zhisheng: Communication on a Victim of an Enforced or Involuntary Disappearance, April 15, 2009, CHRD

Abrogation of Rights in the Case of Gao Zhisheng, November 16, 2006, CHRD