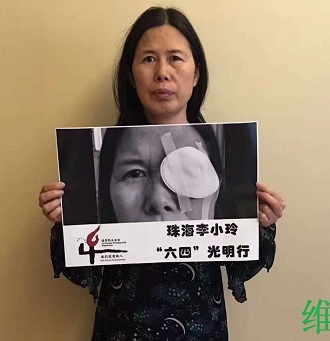 Beijing police took Guangdong-based activist Li Xiaoling into custody in the early morning of June 4, 2017. The night before, she had uploaded photos to WeChat of her holding up a sign in Tiananmen Square while wearing a t-shirt memorializing the June Fourth massacre. Police initially detained her, along with several others connected to either Li or her advocacy, at the Xicheng District Detention Center. Li was reportedly subjected to ill-treatment in the center, including deprived treatment for eye pain, dizziness, and vomiting, and a lack of provision of food and daily necessities.

On July 5, 2017, police released her on “bail pending further investigation,” but instead of being freed, Li was handed over to Zhuhai City police, who forcibly brought her back to Zhuhai and held her in a guesthouse (an illegal detention facility, or “black jail”). On July 19, Li made a harrowing escape from the guesthouse and then went back to Beijing. However, on July 27, she was caught by police in the capital and again forcibly brought back to Zhuhai, where she was given a 10-day administrative detention for violating her bail conditions on July 29. On August 8, at the end of her punishment, authorities criminally detained Li and transferred her to Zhuhai No. 1 Detention Center. She was formally arrested on September 12, 2017, on suspicion of “picking quarrels and provoking trouble.” In November, police transferred her case to the procuratorate, recommending indictment.

Li’s lawyers, Lin Qilei (蔺其磊) and Ge Wenxiu (葛文秀), were allowed occasional access to her. But on other occasions, authorities obstructed meetings between them by taking Li in for interrogation and then sitting there in silence. The detention center granted Li at least two visits to hospitals to get examinations of her injured left eye but refused to let her see a specialist, as recommend by doctors. (During a previous detention, officers had denied Li adequate medical treatment, which resulted in serious damage to her eye.) On December 4, 2017, Li and her lawyer tried to file a lawsuit against Zhuhai police over the alleged torture, but the Zhuhai Jinwan District Court refused to file the case. Li’s lawyer also reported that his application for release on bail had been denied.

On April 28, 2018, Zhuhai City Xiangzhou District Procuratorate indicted Li on charges of “picking quarrels.” They then added a charge of “illegally holding state secret documents” on July 19, 2018. Zhuhai Xiangzhou District Court tried Li on November 14, 2018. The court convicted Li of the “picking quarrels” charge on November 27, but did not find her guilty on the “state secrets” charge, and handed down a three-year sentence, suspended for five years. Shortly thereafter, Li was released on December 3.

Under the terms of her suspended sentence, she is reportedly prevented from leaving Zhuhai, depriving her of freedom of movement. On February 21, 2019, authorities fitted Li with electronic bracelet which she will have to wear for the 5-year duration of her suspended sentence. The device will monitor her, including tracking her movements, and use voice and video recording. If the device is damaged, Li will reportedly have to pay 2,245 RMB to replace it.

Born on July 7, 1962, Li Xiaoling, formerly a successful businesswoman, began her rights advocacy when she sought to expose judicial malfeasance that led to a 2011 death sentence for a man who had allegedly killed her 12-year-old son. In recent years, she has often advocated for the rights of others, particularly by joining campaigns to seek justice for persecuted petitioners and detained and imprisoned rights defenders.