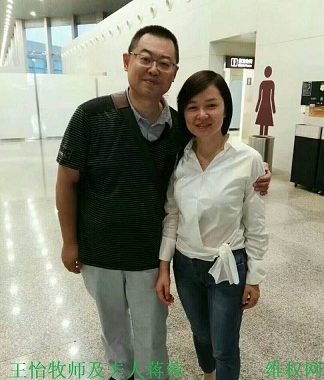 Chengdu authorities detained Wang Yi, an evangelical Christian pastor outspoken about religious freedom, during a raid on the Early Rain Covenant Church (秋雨圣约教会) on December 9, 2018. Police took over 100 members of the congregation into custody, including Jiang Rong (蒋蓉), Wang’s wife and co-founder of the independent church. Reportedly as many as 50 church members had been taken to Xinjin County Legal Education Center in Chengdu in December 2018, a form of extralegal detention used in the past as “black jails” to hold Falun Gong practitioners, petitioners, and human rights defenders under the guise of providing “education” on Chinese laws.

Chengdu public security bureau put Jiang Rong under “residential surveillance in a designated location” (RSDL) on December 9, 2018. Police accused both Wang and Jiang of “inciting subversion of state power” while holding them incommunicado in undisclosed locations and depriving them of access to lawyers. Jiang Rong was released and allowed to return home on June 10, 2019, but was prevented from contacting friends and supporters.

The day of the December 9 raid, authorities sent out a directive prohibiting media from covering the police action and the mass detention of church members. On December 10, authorities issued a notice stating the church’s activities had violated the amended Religious Affairs Regulations, which began to take effect in February 2018. Police officers confiscated materials from the rental space where the church was located in Jiangxin Mansions, an office building where the community also had a kindergarten and seminary. By the afternoon of December 10, some detained church members had already been released or placed under house arrest. Police reportedly forced many detainees to sign a document promising that they would stop attending the church before letting them go.

Roughly one month after the crackdown began, Chengdu police still held 14 of 22 church members who initially had been put under criminal detention or “residential surveillance.” The 8 that had been released were let go between January 9-13, 2019. A dozen church members had been given administrative detentions of 14 or 15 days, and one remained disappeared. Besides the “endangering state security” charges levied against Wang and Jiang, all others were accused of “picking quarrels and provoking trouble” or “illegal business activity.”

On January 8, 2019, police detained lawyer Zhang Peihong (张培鸿) at Wangjiaguai Police Station in Chengdu soon after he had met with Wang Yi’s family, who signed an agreement with Zhang for him to legally represent Wang. Lawyer Zhang was released the following day.

Lawyer Zhang travelled to Chengdu on July 9, 2019 where he was intercepted at the airport by national security officers to “talk”. The next day, he met with prosecutors, who informed him that Wang had been arrested on December 14, 2018. During a second meeting on July 17, prosecutors informed Zhang that Wang Yi was suspected of “inciting subversion of state power” and a new charge of “illegal business activity.” The two prosecutors claimed to have met Wang on July 16 at Chengdu Detention Center, and stated that he appeared much thinner but in a “good mental state,” and his hair was completely white. They also said Wang Yi said he will accept his family-hired lawyers. By August 21, Wang had still not been allowed to meet his family-hired lawyer because authorities wanted to appoint a “politically-suitable” lawyer and had refused to approve any meeting request with the family lawyer. Prosecutors indicted Wang Yi on November 15, 2019 and transferred the case to Chengdu Intermedite Court.

On December 26, 2019, Chengdu Intermediate Court put Wang Yi on trial and convicted him four days later. The court handed down a nine-year prison sentence, three years deprivation of political rights, and 50,000 yuan (US$7,160) fine. Wang Yi was never granted a meeting with lawyer Zhang and it is unknown what kind of legal representation he had at the hearings. Wang’s church, Early Rain Covenant, put out a statement in response to the sentencing, denouncing the conviction of Wang Yi as “part of unjust persecution against Chinese house churches.” Another church member, Qin Defu, received a four year prison sentence on December 30 on charges of “illegal business activity.”

On September 8, 2020, Wang Yi was reportedly still being denied visits with his family. Authorities provided various different excuses. He had not been moved to a prison due to the COVID-19 pandemic and was still held at the detention center. His wife Jiang Rong, who had been placed under “residential surveillance” at home after her release from RSDL, was still not allowed to meet with friends from her church despite being released from “residential surveillance” three months prior.

Since starting the church in 2005, Wang had faced consistent police harassment and intimidation for criticizing the government’s persecution of free religious practice, and for refusing to “officially register” the church, which would have subjected it to direct State control. Prior to the raid, officials appeared to have stepped up pressure on the church. In May 2018, police had detained several church members for holding a memorial service to mark the 10-year anniversary of the 2008 Wenchuan earthquake. In addition, authorities had warned the church in September 2018 that its activities were “illegal.” That same month, Wang Yi, reflecting concern about his own potential persecution, drafted a statement asserting that if he were ever detained, he would not confess to crimes for legitimately expressing his religious beliefs and free speech. His statement was posted online on December 11, 2018—48 hours after Wang Yi was taken into custody (Chinese original and English translation).

The crackdown on the Early Rain Covenant Church came amid a wider, ongoing government campaign targeting independent churches under President Xi Jinping, who has tried to exert tighter controls over religious institutions and practices since coming to power in 2013. In the government’s assault on religious freedom, officials have required intrusive video surveillance equipment be installed in churches and church-goer information be handed over, banned Bible sales online, demolished churches or removed their steeples and crosses, and suppressed a growing list of Christian communities. In response, over 100 pastors of independent churches in China released an open statement on September 1, 2018, opposing the amended Religious Affairs Regulations, which then garnered nearly 200 signatures across China. The statement outlines church leaders’ aspiration to remain independent from the government.

Born in June 1973, Wang Yi has been a defender of religious freedom in China for Protestants and also Tibetan Buddhists and Muslims in Xinjiang. A trained lawyer, Wang was among a pioneering group of defense attorneys in China to convert to Christianity and draw on its basic principles in representing victims of human rights abuses. Prior to establishing the Early Rain Church, Wang had been a blogger, film critic, and Chengdu University professor, and in 2004 was listed as one of the “50 Most Influential Public Intellectuals of China” by Southern People Weekly. Wang also received notice abroad for his religious activities, and met with US President George W. Bush at the White House in 2006 to discuss religious freedom. In August 2015, Wang Yi posted online a document entitled “95 Theses of the Chinese Reformed Church”—echoing the “95 Theses”of Martin Luther—which spelled out his views on the relationship between the State and religious institutions like independent churches.

Opinion No. 36/2019 concerning Wang Yi and Jiang Rong (China), Opinions adopted by the Working Group on Arbitrary Detention at its eighty-fifth session, 12–16 August 2019