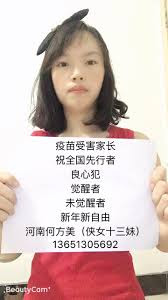 He Fangmei was seized by the police on October 9, 2020 after she splashed ink on a government building in Hui County for the second time in a protest against unsafe vaccines. She had first held an ink splashing protest on October 2, after which police detained her and handed down a 10-day administrative detention but released her without enforcing the sentence because she is pregnant. By October 14, she had reportedly been placed under house arrest at an unknown government-designated location with her children and her husband has been taken away by police.

In March 2022, it what was the first known official statement about her detention since her enforced disappearance in 2020, He Fangmei’s family received an arrest notice dated on March 23, 2022 stating that she had been arrested on the charges of “bigamy” and “picking quarrels and provoking trouble” and was being held at the Xinxiang City Detention Center in Henan province. Radio Free Asia also reported that Hui County officials also contacted her family with a request to take her three children, saying that otherwise the children could be sent to an orphanage.

On June 17, new information emerged that He Fangmei’s trial may have already started, but her lawyer was not allowed to read her case files or visit her.

Rights Defense Network reported that during the trial, although He Fangmei has difficulty hearing due to a disability and needs people to speak loudly or she must use lip reading to understand, the court would not provide her with written documents and only would allow her to listen to the trial. During the trial, she dismissed her legal aid lawyer and submitted 50 pages of her own written defense statement.

Meanwhile, it was reported that her husband, Li Xin, had been sentenced to five years in prison. Details of He Fangmei’s trial and Li Xin’s sentence are unclear at this point, and it is unclear who is taking care of their three children.

In July 2022, human rights lawyer Lin Qilei filed a request with Hui County in Henan for open government disclosure with respect to the foster care situation of He Fangmei’s children.

He Fangmei, an advocate for vaccination safety, was criminally detained in March 2019, after being forcibly returned to her home province of Henan from Beijing. Ms. He had been in Beijing demonstrating with other families whose children had been stricken with illness or disability due to faulty vaccines. Her detention was among a number that occurred around the time of the 40th Session of the UN Human Rights Council in March, which included scrutiny of China’s rights record under the Universal Periodic Review.

She was placed under criminal detention immediately after completing a 15-day administrative detention in Xinxiang City in Henan. Police from Henan had seized her in Beijing on February 25, 2019, when she was demonstrating with over two dozen other parents in front of the National Health Commission, which was at the time holding a press conference on the administration of vaccines. Shortly before being taken into custody that day, He had disseminated a video of the demonstration online.

He Fangmei had sought legislative action and compensation from Chinese government authorities following the disability in March 2018 of her daughter Li Qi (李琪), which tests determined was caused by faulty vaccines. Ms. He’s daughter, who was born in 2016, became paralyzed and was diagnosed with a neurological disease after receiving vaccinations for hepatitis A, measles, and other illnesses. He Fangmei initially appealed to the Huixian Center for Disease Prevention and Control in Xinxiang, but authorities there refused to take responsibility for her daughter’s condition. She subsequently organized a group of families with children sickened by vaccinations, called “Vaccine Baby Home,” who jointly sought accountability, financial compensation, assistance with medical bills, and legislative action from central government officials.

Authorities have attempted to coerce He Fangmei and her husband, Li Xin, during her time in custody. Police told He that they would release her if she admitted guilt to the criminal charge against her, but she refused to do so. While she was under criminal detention, police pressured Li Xin to sign a “guarantee” pledging that He Fangmei would not engage again in “illegal petitioning,” with police telling him it would supposedly help facilitate her release on bail. Li eventually signed the agreement under duress, but He remained detained and was then formally arrested on April 26, 2019, which Li only learned about two days later. Li has never received an arrest notice, though police claimed that one was mailed to him.

Since He Fangmei was placed under criminal detention in March 2019, Li Xin has been frequently monitored and harassed by “stability maintenance” personnel, who have also restricted his freedom of movement. Li tried to apply for an administrative appeal of his wife’s detention, but Xinxiang City Public Security officials said that such an application required a handprint from He Fangmei, which would grant Li power of attorney to file. The handprint was not possible to obtain, however, since He at the time was being fully deprived of visitors. In mid-May 2019, Huixian security forces abducted Li and his daughter after they had gone to Beijing, and forcibly sent them back to Huixian.

After being criminally detained, He Fangmei was deprived of access to a lawyer for three-and-a-half months, with Huixian authorities claiming that a visit would “endanger national security.” A lawyer finally was able to meet with Ms. He on July 5, 2019. After Ms. He’s case was transferred to the Huixian City People’s Procuratorate later that month, her lawyer applied for her release on “bail pending investigation,” but the procuratorate refused the request. The procuratorate indicted He on July 26, 2019. According to the indictment, prosecutors accused her of “picking quarrels” for soliciting for donations, shouting slogans outside the Beijing offices of two government departments, and unfurling a banner with slogans and disseminating an image of the banner on overseas websites. In August, He’s lawyer again applied for her release on bail, but the request was again denied.

On November 15, 2019, Huixian County Court put He Fangmei on trial. She pled not guilty and her lawyer was able to mount a not guilty defense at trial. Prosecutors recommended a one-year prison sentence. The case ended without a sentence being pronounced.

On January 10, 2020, the Huixian County prosecutors dropped the charges against He Fangmei and the court cancelled the case, and she was released. Her lawyer met her in the detention on January 9, and reported that she had lost weight in detetention but her mentally doing ok.

From the summer of 2018 to the time of her detention, He Fangmei had gone to Beijing to present complaints, including abuse of power by government officials, to the Central Commission for Discipline Inspection (which investigates and disciplines Chinese Communist Party officials), the Ministry of Public Security, and China’s State Council. Officials eventually agreed to provide the child victims with medical treatment in Beijing; financial compensation, though also promised by authorities, has not yet materialized for the affected families. On September 3-4, 2018, police detained He Fangmei, Li Xin, and other individuals around Tiananmen Square for protesting the government’s mishandling of scandals involving faulty vaccines and allegedly collecting donations to help care for their affected children. After He Fangmei and Li were forcibly returned to Henan, local authorities prevented them from receiving passports on September 11, 2018, on the grounds that the couple’s potential travel may “endanger national security.” (He and Li had hoped to take their child overseas for medical treatment.) In another act of reprisal, the couple and their child were evicted from their home on September 13, 2018.

He Fangmei, born on October 8, 1985, and others who have called for a vaccine law, more public information about vaccine safety, and compensation to cover mounting medical costs for their children have faced assault, intimidation, and harassment by police. Police have detained, beaten, and forcibly disappeared campaigners ever since they began their advocacy in the spring of 2018. Authorities warned advocates not to give interviews to domestic and foreign journalists, and He Fangmei had been warned by national security officers not to post information about her campaigning on social media, where she posts under the screen name “13 Sisters” (十三妹). Police from Xinxiang City often trailed her when she went to Beijing, including at the hospital where her daughter was receiving medical treatment.

The issues with faulty vaccines that spurred He Fangmei’s advocacy involve one of the most significant public health scandals in China in recent years. Following the outbreak of allegations and a subsequent government investigation of the matter, Changsheng Biotechnology, a vaccine manufacturer based in China’s northern province of Jilin, was found to have sold 250,000 defective vaccines and fabricated inspections dating back to 2014. The state-owned Wuhan Institute of Biological Products, another major vaccine producer, was also found to be have been producing faulty inoculations for infants. In response to the scandal, Chinese authorities dismissed dozens of officials from these companies and levied fines on the manufacturers. In June 2019, China’s legislature passed a law, effective December 1, 2019, on vaccine administration in response to the scandal—one of the demands made by He Fangmei and the families’ campaign.

Opinions adopted by the Working Group on Arbitrary Detention at its eighty-seventh session, 27 April–1 May 2020, CHRD