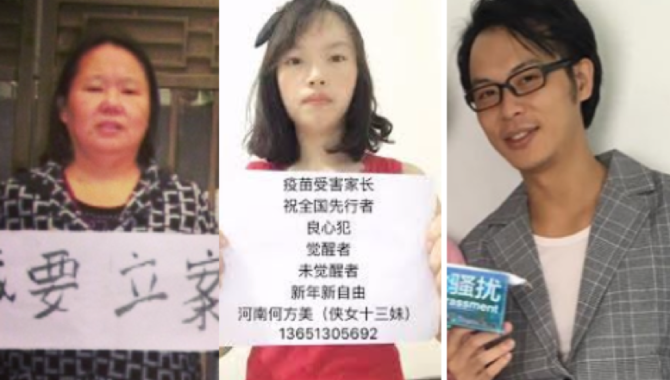 Several human rights defenders working on socio-economic rights issues have been detained just days after the close of China’s 3rdUniversal Periodic Review (UPR) in Geneva on March 15 during the 40th Session of the Human Rights Council (HRC). The timing of the detentions indicates that authorities waited until after the end of the highly public scrutiny of China’s rights records at the United Nations to kick off a likely severe crackdown in a year marking many politically-sensitive anniversaries, including the 30thanniversary of the 1989 Tiananmen massacre. Persecuting social economic human rights defenders contradicts China’s self-claim as a champion in protecting social economic rights.

Shanghai police seized Chen Jianfang (陈建芳) on March 19 from her home and have put her under enforced disappearance. Her current whereabouts and any criminal charges against her are currently unknown. Her home is surrounded by plainclothes officers. Just days before being detained, Chen had penned a tribute to her former colleague Cao Shunli to mark the fifth anniversary of the death in custody of Cao on March 14. Several UN independent human rights experts released a statement on the same day, renewing their call for an investigation into Cao Shunli’s death.

Formerly a farmer, Chen began defending land and housing rights after her family lost land to government-backed developers. She went on to expand the scope of her advocacy, exposing a broad range of rights abuses and demanding government accountability. Beginning in 2008, Chen worked closely with Cao Shunli in gathering information, documenting abuses, and trying to provide the government with their reports, in an effort to participate at the national-level in China’s 2009 and 2013 UPRs. In September 2013, authorities stopped Chen from boarding a flight to attend a human rights training and observe a HRC session in Geneva—on the same day when Cao Shunli was abducted by police while heading to the same program. She was again prevented from traveling abroad in October 2017, when she was to take part in a human rights forum in Ireland. Chen is a co-recipient of the 2018 Cao Shunli Memorial Award for Human Rights Defenders.

Three editors from an online labor rights magazine New Generation (新生代) are believed to be in police custody. Shenzhen police seized editor and activist Wei Zhili (危志立) on March 20 around 1AM from his parents’ home in Guangzhou. According to an account by Wei’s wife, feminist activist Zheng Churan (郑楚然, aka Datu [Giant Rabbit], 大兔), police from Shenzhen Longhua District told his family that he was suspected of “disrupting public order.” Wei’s colleague Ke Chengbing (柯成冰) has gonemissing since March 20 and is believed to be in police custody. The editor-in-chief Yang Zhengjun (杨郑君) has been in custody since Shenzhen police detained him on January 8, 2019. The whereabouts of all three men and the criminal charges against them are currently unknown.

Authorities have hit hard on labor rights activism since a July 2018 strike at the Jasic Technology plant in Shenzhen, which attracted the support of student activists from prestigious universities. Four workers and an NGO activist remain detained since last summer and some students’ whereaboutsare unknown. In January, police detained more students in Beijing and labor rights NGO activists in Hunan and Guangdong.

The outspoken mother of a baby sickened by faulty vaccine, He Fangmei (何方美), has been put under criminal detention on March 20, 2019 on “picking quarrels and provoking trouble” charges for her efforts to organize families of victims of faulty vaccines. Henan police initially picked up He during a demonstration on February 25 in front of the National Health Commission in Beijing. They put her under secret detention at an extralegal detention facility in Beijing, Majialou, before they forcibly returned her to Xinxiang City on March 5 and put her under a 15-day administrative detention the next day. At the expiry of her administrative detention, Xinxiang police criminally detained her. She is currently being held at Xinxiang City Detention Center. He Fangmei and her husband have been part of a group of victims and their families protesting government mishandling of scandals over faulty vaccines after the couple’s daughter got very sick. They have faced reprisals since September 2018 for calling for accountability and protection for victims, including brief detention, denial of passports, and eviction from their home.