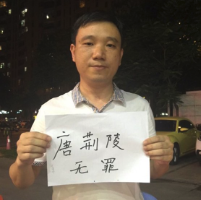 Three activists—Dai Zhenya (戴振亚), Li Yingjun (李英俊), Zhang Zhongshun (张忠顺)—were seized on December 26, 2019, in operations by police from Yantai City, Shandong Province who detained and interrogated more than a dozen human rights defenders across China. The operation also ensnared Beijing-based activists Ding Jiaxi and Xu Zhiyong, who both had previously served prison sentences for their activism tied to the New Citizens’ Movement. Individuals were swept up in Beijing and the provinces of Fujian, Shandong, Hebei, Sichuan, and Zhejiang, with authorities forming a task force to target individuals who attended a private gathering held on December 7-8 in Xiamen City in Fujian. The participants allegedly discussed politics and ideas for China’s future and their civil society experiences. Dai and Li, both from Fujian, were taken into custody at their homes in Xiamen and Zhangzhou, respectively, after attending the event; Zhang was detained in his hometown of Yantai in Shandong. Lawyer Chang Weiping was briefly detained in January and put under RSDL before being released.

Dai and Zhang have been accused of “inciting subversion of state power” and placed under “residential surveillance in a designated location” (RSDL) on unknown dates. Details of Li’s alleged crime and detention status are unconfirmed, though he likely is being held under the same conditions. Dai, Li, and Zhang have been forcibly disappeared and are at significant risk of torture and cruel, inhuman, and degrading treatment.

Officers took Zhang into custody at an unknown location and then searched his home and confiscated a computer, phone, and other personal belongings. In searching Dai’s residence in Xiamen, police handcuffed him and took away his computer, tablet, phone, and other items, and initially held him at Huli District Police Station in Xiamen. The circumstances of Li’s detention are unknown.

Yantai police have deprived the men of access to their lawyers and communications with their families, claiming that their cases “involve endangering state security.” Authorities also have not issued any documentation on their detentions, instead orally informing families of only some details, such as the criminal charges that Dai and Zhang were facing and their being put under RSDL. In Dai’s case, his wife was made to sign a transcript that summarized what police had orally told her; however, she was not allowed to keep or copy the transcript, nor provided or asked to sign an official document. As of March 2020, the only case documentation produced by Yantai police were notices issued in January to the lawyers for Dai and Zhong that denied them client visitation on the grounds that such contact may “endanger state security.” These notices also were the first written confirmation that the men were being held on suspicion of “inciting subversion of state power.”

In the case of Zhang Zhongshun, Yantai authorities have repeatedly changed the criminal charge against him in order to justify his detention, indicating the case against Zhang is weak. In an apparent attempt to concoct evidence of Zhang’s criminal behavior, police raided properties belonging to him on three separate days in January 2020, each time without allowing his wife to keep a copy of an official search warrant. On January 2, Yantai PSB national security officers went to one of Zhang’s rental properties in Yantai. Armed with a search warrant based on the criminal charge of “causing an accident through dangerous materials” (Article 136 of the Criminal Law), officers claimed to have found 245 bullets and printed material on how to make a bomb in the property. Zhang’s wife believed that the officers planted the items, finding it suspicious that the search warrant was based on a specific legal provision, as if the officers “knew” that they would find such articles in the property. Two days later, officers searched two properties in Weihai City owned by Zhang which had been empty for almost one year. The officers had another search warrant, that one citing the charge “sabotaging broadcasting, television or public telecommunications facility (Article 124). On January 7, 2020, police told Zhang’s wife that he was accused of “carrying out a terrorist activity.” On January 13, 2020, national security officers searched Zhang’s office in Yantai, reportedly coming with a warrant that did not list a crime on it.

On June 18, 2020, Dai Zhengya, Li Yingjun and Zhang Zhongshun were released on bail.

Born on May 8, 1973, Dai Zhenya, a finance manager at a private company based on Xiamen City, Fujian Province, has long been involved in human rights work, and on several occasions had been detained and interrogated by police prior to his current detention. Dai has raised funds for political prisoners and human rights defenders, submitted applications for the government to publicly disclose information, assisted individuals who have suffered rights violations to file administrative and public interest lawsuits, and promoted the development of civil society.

Born in 1984, Li Yingjun (李英俊) is a factory worker who has been involved in rights activism since 2013, and has a deep interest in constitutional democracy and social justice. Li has campaigned to support incarcerated human rights defenders and taken part in the “Same City Movement,” where activists in the same city have regularly gathered to discuss activism and government reforms.

Born on August 19, 1967, Zhang Zhongshun, a former professor at Yantai University in Shandong, was previously detained in August 2007 and imprisoned for three years after showing students a documentary that included footage of the 1989 military crackdown on pro-democracy protests in Beijing. Following his release in 2010, Zhang was dismissed by the school and began to engage in civic activism. Like Li Yingjun, Zhang has participated in the “Same City Movement.” He has promoted ideas about grassroots organizing, trained others on how to conduct non-violent advocacy campaigns, and sought donations and funding for prisoners of conscience and other rights defenders facing difficult circumstances.