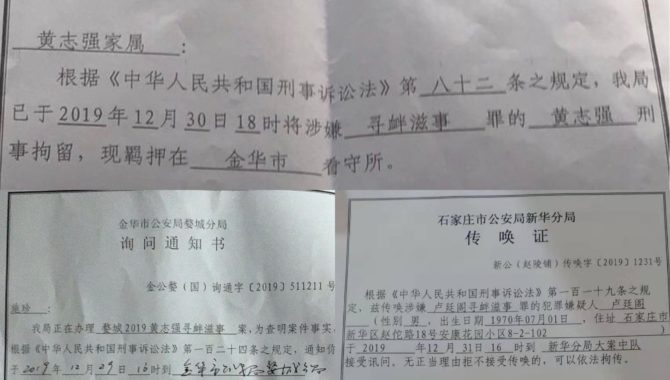 (Chinese Human Rights Defenders, January 2, 2020) In the last few days of 2019, Chinese police detained and summoned for questioning a dozen activists and lawyers in Fujian, Shandong, Beijing, Hebei, Sichuan, and Zhejiang. The raids appear to target individuals who attended a small, private gathering in Fujian on December 13. A similar gathering took place one year ago in Shandong, which may explain why the Shandong police took the lead in these raids.

We have so far gathered the following information:

1. Ding Jiaxi (丁家喜), 52, disbarred lawyer, former prisoner of conscience, and Beijing resident, was detained on December 26 in Beijing by Shangdong police. Police searched his place, took away his computer, phone and other personal belongings, without presenting any arrest warrant.

2. Zhang Zhongshun (张忠顺), 52, activist, former prisoner of conscience, university professor, and resident of Yantai, Shandong, was detained on December 26 by Shandong police on suspicion of “subversion of state power.” Police did not produce any arrest warrant, searched his house, confiscated computer, phone, and other personal belongings. Reportedly, he has been put under “residential surveillance in a [police] designated location” somewhere in Yantai. His exact whereabouts remain unknown. Mr. Zhang did not attend the Fujian gathering.

3. Dai Zhenya (戴振亚), 46, activist and resident of Fujian, was detained on December 26 in Xiamen by Shandong police, on suspicion of “inciting subversion of state power.” No arrest warrant was displayed. Dai’s residence was searched and police took away his computer and phone. Mr. Dai, an accountant at a corporation, has reportedly been put under “residential surveillance in [police] designated [unknown] location.”

4. Li Yingjun (李英俊), 35, activist, factory worker, and resident of Zhangzhou, Fujian, was detained on December 26 in Fujian by Shandong police.

5. Huang Zhiqiang (黄志强), 47, a lawyer, was detained on December 29, in Jinhua, Zhejiang, and is now under criminal detention on suspicion of “picking quarrels and provoking trouble.”  Police have sent his family a detention notification. He is being held at the Jinhua City Detention Center.

6. In Sichuan, police detained activist Wei Xiaobing (卫小兵) on December 30. Mr. Wei, 42, a businessman, has recently been detained briefly in relation to distributing T-shirts printed with words expressing support to HK protests. It is unclear whether his detention is related to the crackdown on the Fujian gathering.

Several people were detained for questioning and later released.

Police detained Liu Shuqing (刘书庆), 43, a lawyer, university professor, in Jinan, Shandong, for questioning on December 31, on suspicion of “subversion of state power.” Police used force to kick open the door of his residence without any warning. Police also confiscated his computer and cell phone. Liu had recently undergone heart by-pass surgery. On January 1, Mr. Liu was allowed to go home.

Police took five people to the Jinhua Police Station for questioning in Hangzhou on December 29:  Zhu Yufu (朱虞夫), Xin Zhongcheng (辛忠诚), Wu Zexi (吴泽西),  Mao Lijun (毛立军), and Tang Xiaoyun (唐晓云). The five activists did not attend the Fujian gathering. They had dinner with someone who did. After being interrogated for one day, they were allowed to go home. Meanwhile, police in Shijiazhuang, Hebei, also took away lawyer Lu Tingge (卢廷阁) for questioning on December 31 on suspicion of “picking quarrels & instigating trouble.” He returned home on January 1.

Police have also been visiting other homes and several people are missing. Two lawyers said they narrowly missed the police looking for them at their homes. Friends and families have not been able to reach Xu Zhiyong (许志永), Ding Lingjie (丁灵杰),Tang Jingling (唐荆陵), and Liu Jiacai (刘家财). Police are said to be questioning families or friends about the whereabouts of Mr. Xu, Mr. Tang and Mr. Liu.