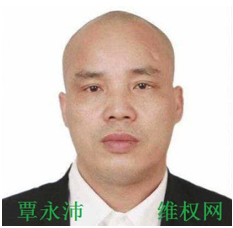 Qin Yongpei (覃永沛), a disbarred rights defense lawyer from Guangxi region, was detained in October 2019 in apparent retaliation for criticizing on social media the corruption of high-level Chinese officials. Qin has also long advocated for fellow persecuted lawyers. More than 10 Nanning City police officers seized Qin from the office of Baiyongming Legal Consulting Services Co., Ltd. (百永鸣法律咨询服务有限公司). Qin had been serving as the director of Baiyongming, which had formerly been a law firm until it was forced to dissolve and turned into a consultancy. Police criminally detained Qin and searched both the company’s premises and his home, seizing several of his personal possessions. Qin, who has been held incommunicado during his entire detention, was formally arrested in December 2019, and police transferred his case for indictment to the Nanning City People’s Procuratorate in March 2020. The procuratorate indicted him on April 30, 2020, after sending his back to the public security bureau for further investigation on April 3, 2020.

On December 31, 2021, amidst a heavy state security presence, disbarred human rights lawyer Qin Yongpei went on trial at the Nanning City Intermediate Court in a hearing that was not open to the general public.  The lawyer for Qin Yongpei wanted seven witnesses to attend, but the court did not allow the defense’s witnesses to testify.  According to Qin’s wife Deng Xiaoyun, who was the only person affiliated with Qin to attend, Qin maintained his innocence. The sentence will be announced on another day.

On July 4, 2022, the Supreme People’s Court approved a three-month extension on his case, which Qin’s lawyer only received on July 28. Also, on July 14 his lawyer applied for parole, but did not receive a reply as to whether it was accepted, even though such a reply should legally be completed within three days.

In the months prior to his detention, Qin had commented online about “politically sensitive” topics, including the pro-democracy protests happening in Hong Kong. He also had actively called for the release of several detained lawyers, including a former colleague, Chen Jiahong (陈家鸿), who was taken into custody in April 2019 and, like Qin, was accused of “inciting subversion of state power.” Resorting to a high level of harassment with his case, police in February 2020 interrogated Qin’s two daughters about his online activities and any “sensitive” comments that he may have made at home.

Nanning officials on multiple occasions have blocked lawyers Song Yusheng (宋玉生) and Wang Yue (王乐) from meeting with Qin, claiming that his case “might involve state secrets.” The detention center in Nanning has reportedly refused to give Qin clothes for cold weather, which were provided by his family. Qin was finally granted a meeting with his lawyers on August 31, 2020 because the case had entered the “trial” phase. They reported that his mental state appeared to be good though he was being held in overcrowded conditions. Qin maintained his innocence on all charges.

Qin, who was disbarred in May 2018, was among several state-persecuted lawyers who set up in September 2018 what they satirically named the “Disbarred China Lawyers Club” (中国律师后俱乐部). The lawyers, though prohibited from representing clients at trial or visiting them in detention, vowed to keep providing legal consultation to victims of rights abuses and to push for rule-of-law reforms. By November 2018, Chinese authorities had targeted the group and declared it an “illegal organization,” and officers raided one location of the club in January 2019.

Qin Yongpei, born on September 12, 1969, is among at least a dozen defense lawyers in China who judicial authorities have stripped of their law licenses in recent years. Long before being detained, Qin had openly urged citizens in Guangxi to seek out and share evidence of corrupt practices by judicial and public security officials. He was briefly taken into custody and interrogated by police as part of the widespread crackdown on human rights lawyers launched in July 2015. Qin had also drawn the attention of Nanning authorities for his work advocating for local villagers who had sought rights protections, including residents detained for protesting pollution from state-owned mining companies.