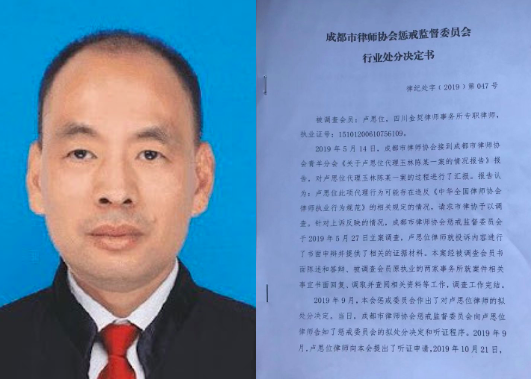 The Chengdu City Lawyers’ Association, a state-run agency, handed out a “professional reprimand” to discipline human rights lawyer Lu Siwei (卢思位) on April 24, 2020. The Discipline Oversight Committee of the Association said in a written document that lawyer Lu violated the rules by representing another human rights lawyer, Chen Jiahong, based in Guangxi region, who has been detained and charged with “inciting subversion of state power.” The written reprimand will stay on lawyer Lu’s record, which may affect him during the annual review of his qualifications for keeping his lawyer’s license.

Lawyer Chen Jiahong was detained in April 2019, soon after he had posted a video on social media in which he criticized the Chinese Communist Party and President Xi Jinping, and called for China to move towards a more democratic and constitutional government. His lawyer Lu Siwei had tried to visit him but was blocked until a meeting was finally granted in December 2019.  During the meeting, Chen disclosed that he had been subjected to deprivation of sleep, poor quality food, and other forms of mistreatment for refusing to admit guilt under coercion.  On March 12, 2020, a Guangxi court notified lawyer Lu that Chen had “dismissed” him. Detaining outspoken lawyers and administratively penalizing these lawyers’ lawyers have become routine practice in China. It violates international human rights standard on the right to a fair trial and interferes in the independence of lawyers.

The full notice is below (Chinese only):