May 4, 2020       Comments Off on Veteran Activists Imprisoned and Detained for Online Speech 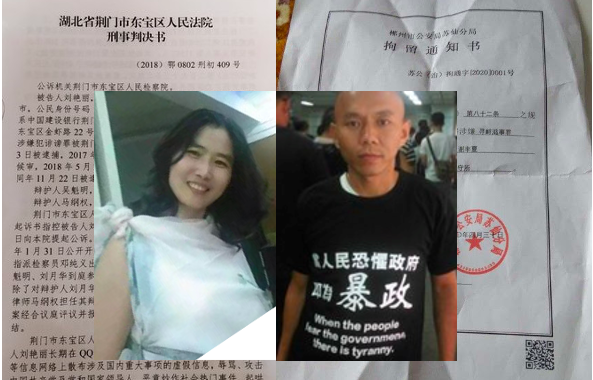 On April 22, 2020, Dongbao District Court in Jingmen City convicted activist Liu Yanli (刘艳丽) of “picking quarrels and provoking trouble” and sentenced her to four years in prison. Hubei police had criminally detained the activist on the “picking quarrels” charges on November 22, 2018 for “insulting and attacking the Chinese Communist Party” by criticizing former and current state leaders, including Mao Zedong, Zhou Enlai and Xi Jinping. She was tried on January 31, 2019 and sentenced over a year later on April 22, 2020. She is currently detained at Jingmen City Detention Center. Liu, 44, has been active on her Qzone and WeChat account making comments on democracy and politics since September 2009. Police repeatedly harassed her for her online speech. On September 26, 2016, she was criminally detained for eight months on suspicion of “libel” after she posted and reposted over 10 messages about Mao Zedong, Zhou Enlai and Xi Jinping on her WeChat Moments. On May 25, 2018, she was placed under “residential surveillance” for six months for “libel”.

Chenzhou City police seized activist Xie Wenfei (谢文飞) on April 29, 2020 and criminally detained him the next day on suspicion of “picking quarrels and provoking trouble.” On the day police seized Xie, he had tweeted a poem to commemorate Lin Zhao, a young and prominent dissident who was imprisoned and executed on April 29, 1968 during the Cultural Revolution for her criticism of Mao Zedong’s policies. Xie had also recently criticized the detention of the three young volunteers who posted censored information about COVID-19 online, the disappearances of citizen journalists Fang Bin and Chen Qiushi in Wuhan, and had signed an online petition to commemorate Dr. Li Wenliang.

On April 29, 2020, which was also Xie’s birthday on the lunar calendar, Xie’s friends could not reach him. The next day, his friends went to search for him at his place but learned from his landlord that Xie had been taken away by police in the evening of April 29. His family received the police notice on May 3, 2020. Xie is currently detained at Zixing City Detention Center. Xie, whose real name is Xie Fengxia (谢丰夏), is veteran activist who has been detained many times for exercising his rights to free expression and peaceful assembly over the years. On March 1, 2019, Xie was released from prison after serving a 4.5 years’ imprisonment for “inciting subversion of state power” for demonstrating in support of the 2014 Occupy Hong Kong protests.