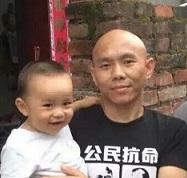 Chenzhou City police seized activist Xie Fengxia (aka Xie Wenfei) on April 29, 2020 and criminally detained him the next day on suspicion of “picking quarrels and provoking trouble.” On the day police seized Xie, he had tweeted a poem to commemorate Lin Zhao, a young and prominent dissident who was imprisoned and executed on April 29, 1968 during the Cultural Revolution for her criticism of Mao Zedong’s policies. Xie had also recently criticized the detention of the three young volunteers who posted censored information about COVID-19 online, the disappearances of citizen journalists Fang Bin and Chen Qiushi in Wuhan, and had signed an online petition to commemorate Dr. Li Wenliang.

On April 29, 2020, which was also Xie’s birthday on the lunar calendar, Xie’s friends could not reach him. The next day, his friends went to search for him at his place but learned from his landlord that Xie had been taken away by police in the evening of April 29. His family received the police notice on May 3, 2020.

On May 11, Zixing City Detention Center officials rejected the request from lawyer Zhang Lei to visit Xie, who illegally claimed he must get approval from the public security bureau unit handling the case. Officials then told the lawyer he could visit but must provide a CT scan of his lungs, results of a COVID-19 test, and his health app code.

On September 18, the detention center officials again used the same excuse to reject lawyer Chen Jinxue’s request to visit Xie. And, again on October 12, the officials rejected lawyers Chen Jinxue and Ren Quanniu’s request to visit Xie based on the same ground. The lawyers deposited 500 RMB into Xie’s account in the detention center and filed a complaint at the procuratorate and public security bureau.

Police took activist Xie Fengxia into custody in October 2014 during the suppression of mainland supporters of the pro-democracy protests in Hong Kong. Authorities detained Xie after he and activists Wang Mo (王默) and Sun Liyong (孙立勇) held up a banner in a Guangzhou park calling for freedom and support for the Hong Kong protestors. Initially held on suspicion of “picking quarrels and provoking trouble,” Xie was arrested on the more serious “inciting subversion” charge a month later. Authorities indicted Xie and Wang Mo on May 18, 2015, and then tried them together. (Sun Liyong was released after 30 days in detention.)

Authorities accused Xie and Wang of being involved in pro-democracy Internet campaigns beginning in 2012, and using different online personas to post information about freedoms, human rights, June Fourth, and detained human rights defenders. The court verdict against them claimed Xie and Wang had been “influenced” by foreign ideas about freedoms, and that their conduct had been aimed at inciting the overthrow of the Chinese Communist Party. Their lawyers argued at trial that their activities were protected under the right to freedom of expression and peaceful assembly.

Xie was reportedly tortured in Guangzhou No. 1 Detention Center days after being taken into custody, but authorities never investigated the allegations. According to his lawyer, Wu Kuiming (吴魁明), at one point during Xie’s detention, his arms and legs were shackled and fastened together for a total of over 100 hours, during which Xie was given only periodic access to water or the bathroom.

Born on April 7, 1977, in Hunan Province, Xie Fengxia is also known by his pen name, Xie Wenfei (谢文飞). He was involved with the Guangdong “Southern Street Movement,” which has consisted of activists taking to the streets or other public spaces to conduct rights advocacy and express political ideas. Before he was seized in October 2014, police had criminally detained Xie twice earlier in the year after he had joined campaigns calling for the release of detained human rights defenders.

Veteran Activists Imprisoned and Detained for Online Speech, CHRD, May 4, 2020